With The Surface Out For 6 Months, Microsoft Is More Likely To Release a Surface Phone

Riding upon the relative success of the Surface Pro tablet, Microsoft is likely to point their designers at a Surface Phone to gain needed market share.

On the eve of their big London announcement, Nokia might have a problem. Once, far and away the favorite to take Microsoft on a ride of profit and swing dancing, Nokia has failed to take advantage of it’s position as Fresh Prince of Windows Phone to gain any significant market share.  Windows Phone still finds itself an uber-distant third in the smartphone marketplace and while Nokia has done an admirable job making quality hardware, it hasn’t quite gotten the job done in the flying off the shelves department.

Now Microsoft might have to take the reins and ride this horse to the finish line, or into the ground. It seems it may be Microsoft’s turn to determine its own fate in this race – win or lose. We have often complimented on Microsoft taking pages from Apple’s playbook. The only page they have yet to run with is the page that says “Control the process from beginning to end.” Sure, Microsoft has been peeking over Lumia’s shoulder, but when it came to hard and fast hardware choices, the name on the signature line read “Elop” not “Ballmer”.

Microsoft has demonstrated an ability to make high quality hardware, beyond the expectations of many a tech writer, myself included. The Surface is a great piece of hardware. It’s smooth, it feels great, it looks great, it’s innovative. I wanted one when I saw the demo last June. I still want one today. So an argument that Nokia makes great hardware is almost moot – so does Microsoft. The only advantage Nokia has in this arena is camera technology, which is brilliant, but certainly able to be duplicated.

Microsoft can also take advantage of the massive marketing campaign that has ringed the planet. You may have seen the commercials, on TV or youtube, of people spinning and break dancing and generally doing a lot of things a normal person would never do with a $1,000 tablet. You’ve seen the products on many of your favorite tv shows, from Hawaii Five-0 to House of Lies.  Some of you may be screaming “But that was NOKIA doing that, not Microsoft!” and you may be partially right. I know for a fact that Grace Park has used a Surface or two, and others have been sprayed around here and there. 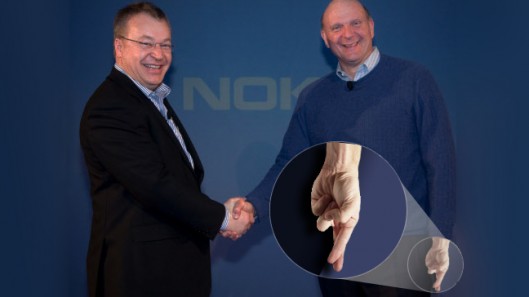 Also, Nokia has seen some loss in recent quarters and haven’t been exactly burning up the charts. Q4 of 2012 saw roughly 4.4 million Lumia smartphones sold, no small number. But consider, Nokia has had two years to get this whole “smartphone” thing down pat. Windows phone remains in the sub 5% arena. The Surface, after just 6 months has moved just a hair under 900,000 units last quarter after having just been born months earlier. There is clearly something compelling in the Surface tablet and maybe not so much in a Nokia phone.

When I imagine what a Surface phone would look like, I imagine something in the neighborhood of an HTC One. Aluminum construction, cool metal feel, slim and solid with a magnetic keyboard. Ok, I’m kidding on that last part. But the image of this phone, running the latest and greatest to roll out of Microsoft’s servers is definitely a compelling argument to go it alone. Give it a camera that is no slouch and son, you’ve got yourself one helluva phone. Sorry, I channeled Taylor Martin there for a second.

Sure, none of this is good for Nokia. But at the end of the day, Microsoft has to be concerned with filling the vaults in Seattle, not in Finland. Microsoft crawled into bed with a really comfortable spooning position with Nokia, but if Nokia is hogging all the blankets and not even sharing the remote, maybe it’s time for Microsoft to get their own place again.

I for one am a fan of Nokia taking the ball and running with this project. I have been for quite some time. Nokia has done a lot to make Windows Phone the mobile operating system that it is today. But as much of a fan that I am, and as much as I respect what Nokia has brought to the table, I have to think that it’s time to see what Microsoft can do with their own operating system. If the Surface wasn’t so sleek or solid, this is a different conversation. Clearly Microsoft has a top notch design team and it would be fantastic to set them loose on the smartphone market and see what they can dream up.

Of course, it’s fair to acknowledge, that in just a hair under two days, this may be a moot point. Nokia’s event tomorrow is quite possibly their last shot at a win before Microsoft steps in and takes control of its own mobile fate.

This is the latest list of Amazon deals that you can get this week. You can find a wide variety of Samsung products and more