Microsoft Lumia 640 review: one of the best values in mobile (again)

Ever since Microsoft bought Nokia’s mobile device division, the Lumia line of Windows Phones has been focusing on affordable smartphones that still bring a lot of good-enough features with less compromises. This is probably a good strategy, since I’m sure a huge percentage of the population doesn’t need an $800 iPhone for texting, Facbook, and Instagram. The Lumia 640, is one of the first Lumia smartphones to finally include Microsoft’s own branding, and it removes many of the compromises you might have to endure on other low-priced budget smartphones like the Lumia 5XX series and even the Lumia 63X series. Read on to find out about this new sub-$200 Windows Phone 8.1 smartphone.

The Lumia 640 has a Quad-core 1.2Ghz Snapdragon 400 SoC processor with an Adreno 305 GPU, 1Gb of RAM and 8 GB of internal storage. About half of that is taken up by the operating system, bundled apps, and your synced email accounts data. That’s not a lot of room for very many 3rd party apps, music, pictures, and videos, so thankfully a Micro SD slot is under the battery cover. You can add up to 128 GB of storage that way and what’s excellent about Windows Phone 8.1 is that you can now move or install apps to the SD card.

The phone’s size is a respectable 141.3mm x 72.2mm x 8.8mm and the weight is 145g. The screen is a large 5 inch Gorilla Glass 3 ClearBlack IPS LCD panel with a 1280 x 720 pixel resolution which translates to a print quality 294 pixels per inch. It’s got an ambient light sensor, accelerometer, proximity sensor, magnetometer, and SensorCore for excersize tracking. The 8 megapixel backside illuminated camera on the back has auto-focus and an LED flash, while the front facing camera is only 0.9 megapixels. It’s all powered by a 2500 mAh battery. This particular version is the one made for Cricket Wireless, but there are also unlocked and dual-SIM versions. 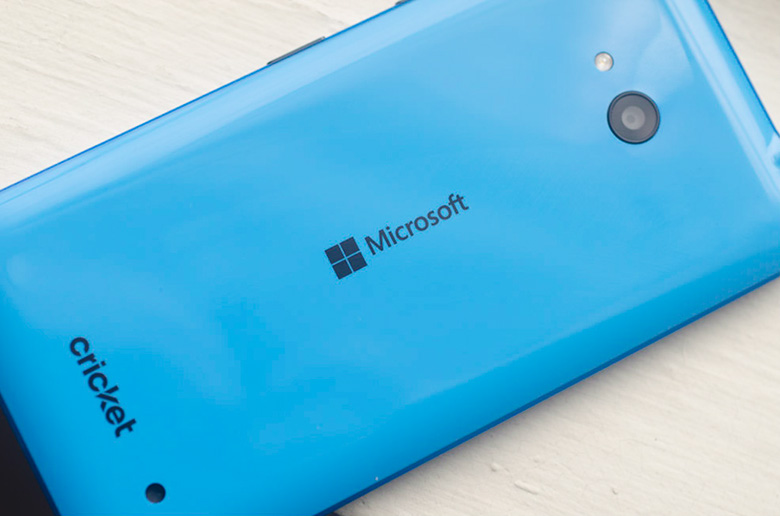 Those are some pretty decent specs for smartphones in this price range. The only high-end things you’re really missing are NFC, wireless charging, and a higher end camera with more resolution and optical image stabilization. 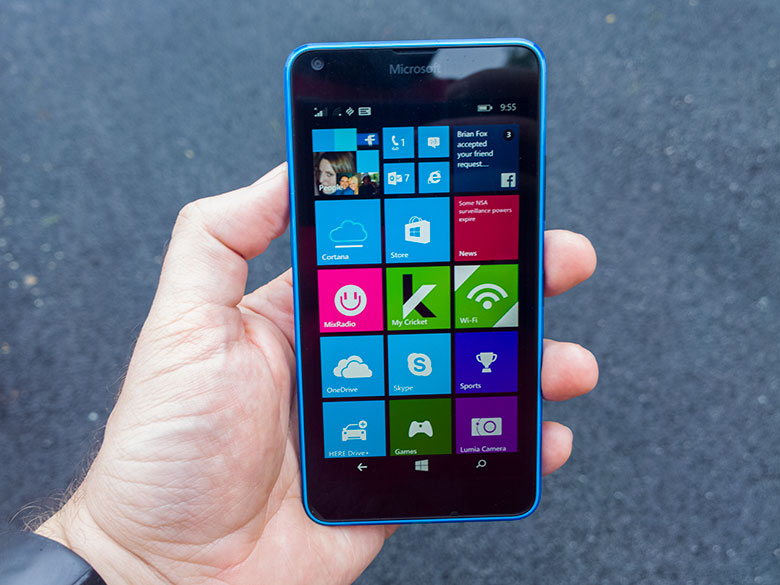 The Lumia 640 certainly feels nice in the hand. It’s thin, it has flat edges that are easy to grip, and it’s got a great looking cyan blue translucent battery cover. It is very shiny and slick though, so you’ll be wiping off finger prints and hand oils pretty frequently. When it’s too thin, it becomes difficult to hold and use but the flat edges really help in this regard. 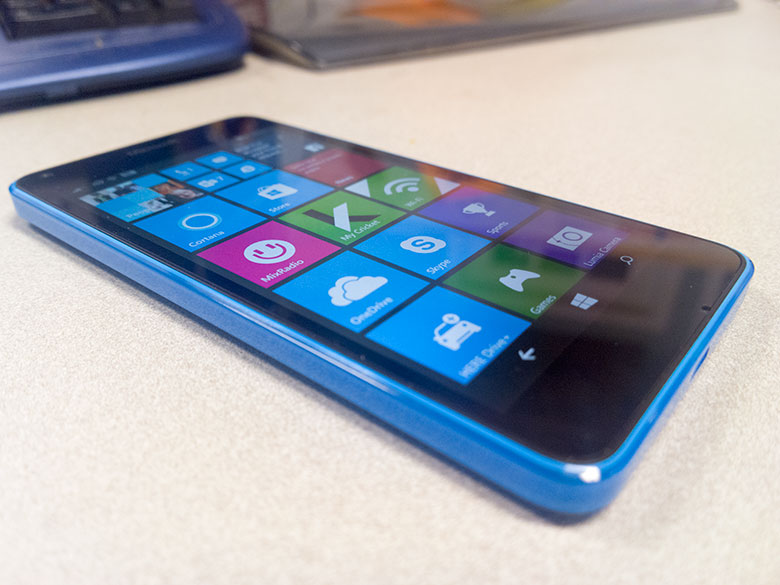 The 720 x 1280 pixel screen has plenty of pixel density for sharp print-quality viewing, but its contrast fades a bit when viewing from extreme angles. That’s probably only going to be an issue if you’re trying to use it to watch a movie with 4 of your friends, but still the screen is very tolerable. It’s totally readable outdoors as well, which is not so true with something cheaper like the Lumia 530. 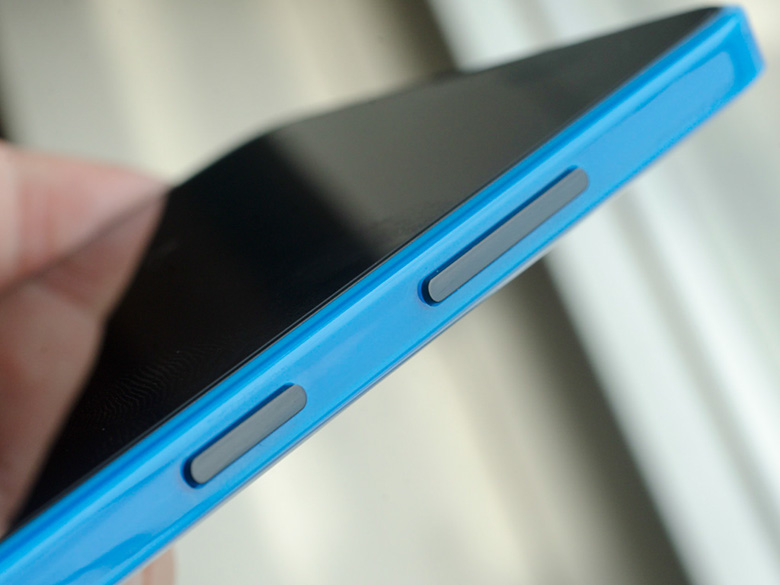 On the right side there’s a power button and an up/down volume control. The buttons are easy to find with your fingers and they’ve got great tactile feedback, but they certainly don’t have a premium feel. They’re just simple plastic buttons. A dedicated camera button is missing, which is extremely unfortunate. To launch the camera, you’ll have to pin its tile to your start screen, or add the camera quick action to the Action Center. Unfortunately, the action center’s top-edge screen gesture is very poorly placed at the top of the screen. 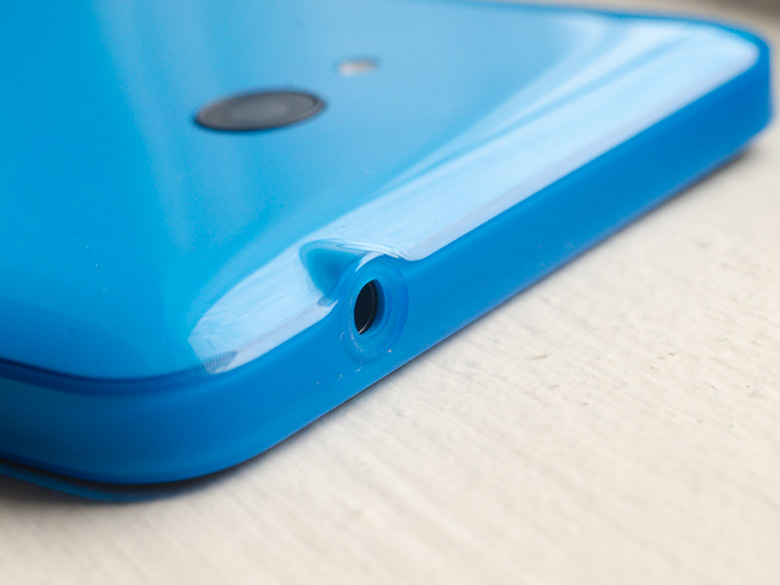 On the top is the 3.5mm headset jack and it sticks out a bit over the rounded edges of the battery cover. This is the spot where the translucent battery cover really looks the coolest. 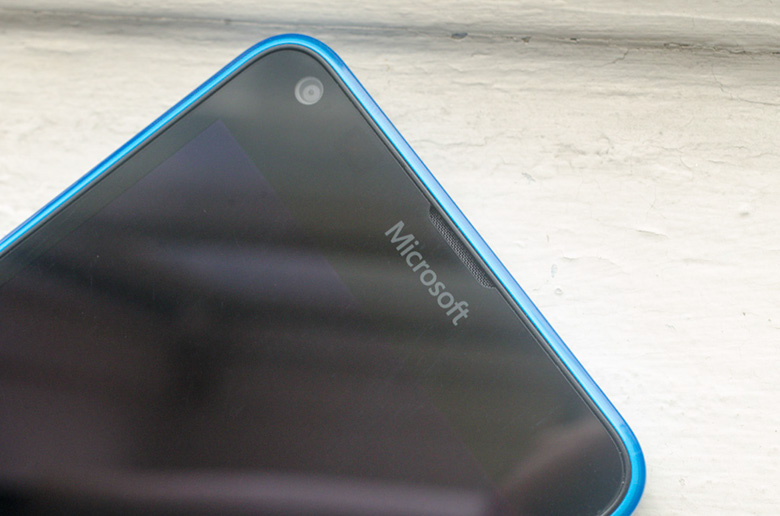 There is a front-facing camera on the Lumia 640. Often smartphones in this price range tend to lose out on features like that, but it’s great to be able to do video calls when the need arises. The resolution is very low though. You’re not going to take many amazing selfies with this. 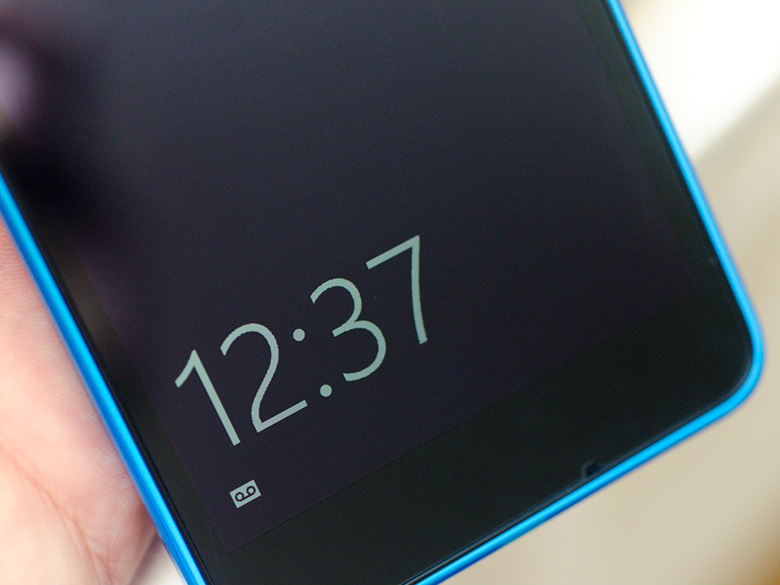 The Lumia 640 actually includes Glance Mode. This is another awesome feature that’s usually found on higher-end Lumia devices, but it’s finally available on something more affordable. Glance Mode shows some phone information and the time on your screen in a low-power state when it’s in sleep mode so that you can quickly see some important stuff without turning the whole phone on.  Unfortunately, this is the old version of the Glance Mode software which only shows the clock and notification icons. It does not show any detailed status information, the date, or background lockscreen app data. 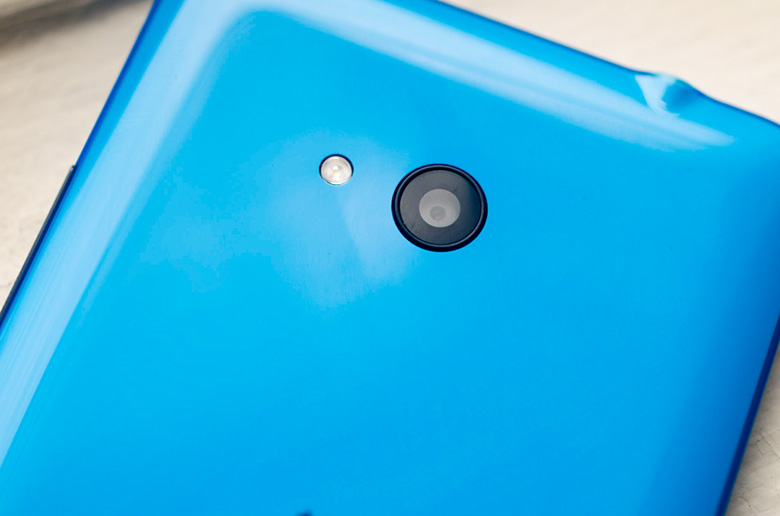 On the back is the 8 megapixel camera and LED flash. It’s fairly flush with the battery cover, but there’s a slight rim that you can feel with your fingers. That’s a good thing though since you’ll be able to tell when you’re touching the lens and getting finger prints all over it. 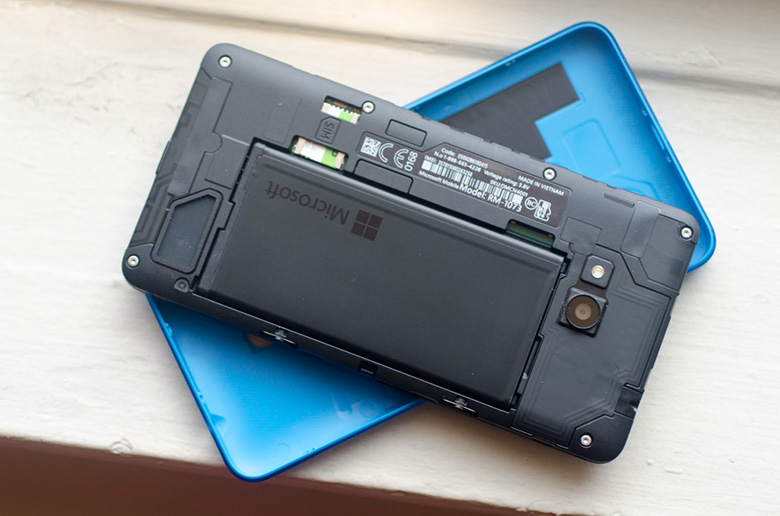 Thankfully, the battery cover is removable as is the battery. The battery is a BV-T5C model with 2500mAh capacity. Spare batteries of this type are difficult to find, but there are some on eBay for $27 with a $48 shipping fee. That is much more expensive than the spare batteries you can get for the Lumia 5XX series (BL-5J) which you can get for $5 with free shipping. Also found under the battery cover is the Micro-SIM card slot and a MicroSD card slot for expanding the storage. 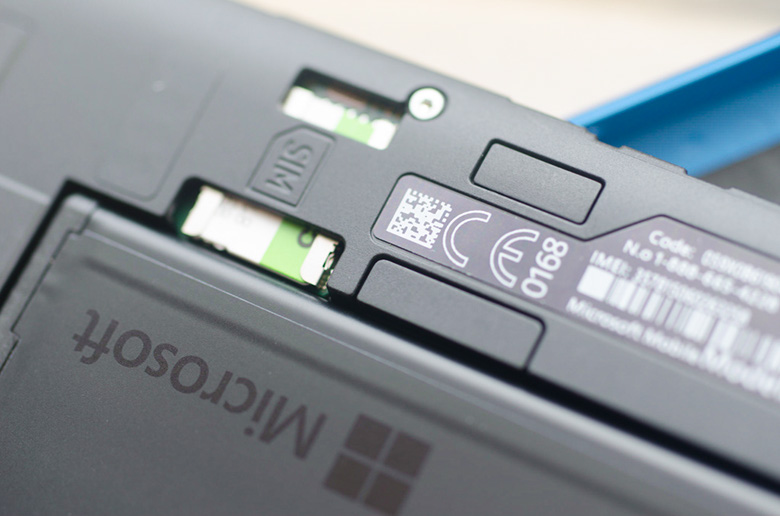 You’ll also notice some plastic indentations next to the SIM card slot. This is where the Dual-SIM version of the Lumia 640 would have a second SIM card slot for enabling two mobile carrier accounts at the same time.

The Nokia Lumia 640 ships with Windows Phone 8.1 Update 2 as well as Nokia’s “Denim” firmware. You can read more about the operating system in our Windows Phone 8.1 review as well as our Windows Phone 8.0 review, but there are a few new things in the version of the operating system on the Lumia 640 that we weren’t able to test in our original review. For example, there’s a new feature where you can double tap a blank area of the bottom toolbar between the back, start, and search keys and that will put the phone into sleep mode. Combine that with the double-tap to wake feature and you don’t really need the power button anymore. The settings are also organized differentlly and there’s a search field for quickly finding the setting you want to change. Bluetooth keyboards and Miracast display wireless
connectivity are also now supported. This Cricket branded model also includes a couple special apps for use with the Cricket service. 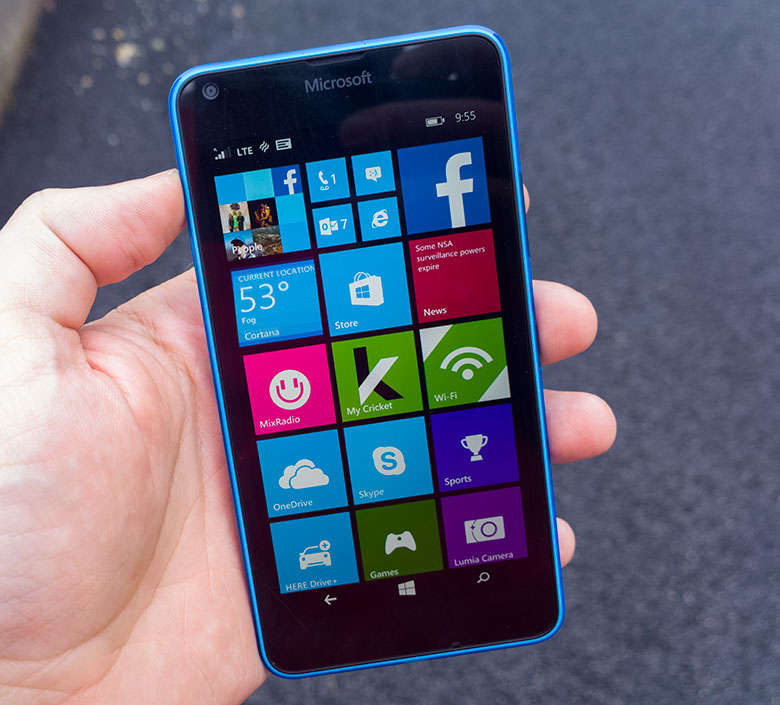 The “My Cricket” app shows up on first boot right in the middle of the start screen. This is a special account management app for the Cricket service. It lets you manage your service, view data usage, pay your bills, add/remove account features, set up / manage Autopay and contact customer care. It also has a live tile, so that’s nice.
The green “Wi-Fi” icon next to it is another Cricket app that lets you search for nearby Wi-Fi access points that you can connect to as part of your Cricket service. 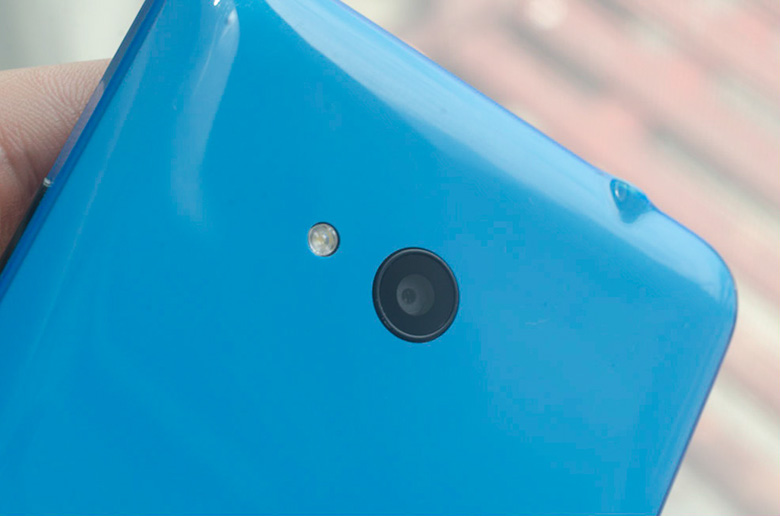 The 8 megapixel camera on the back of the Lumia 640 is actually a significant improvement over the Lumia 630’s 5 megapixel camera. For one, it supports Lumia Camera 5 with live images and rich capture. Rich capture can be very useful. Instead of just some canned HDR mode, rich capture does a similar thing by taking 2 or 3 photos (maybe one with the flash on) and merging them. However, you can choose “edit rich capture” after the fact and change the way the images were merged. That means you can actually change the lighting conditions of your photo after you’ve already taken it. It’s extremely cool. Also unlike other HDR modes, a compressed source file with the original JPGs is available in the phone’s memory. 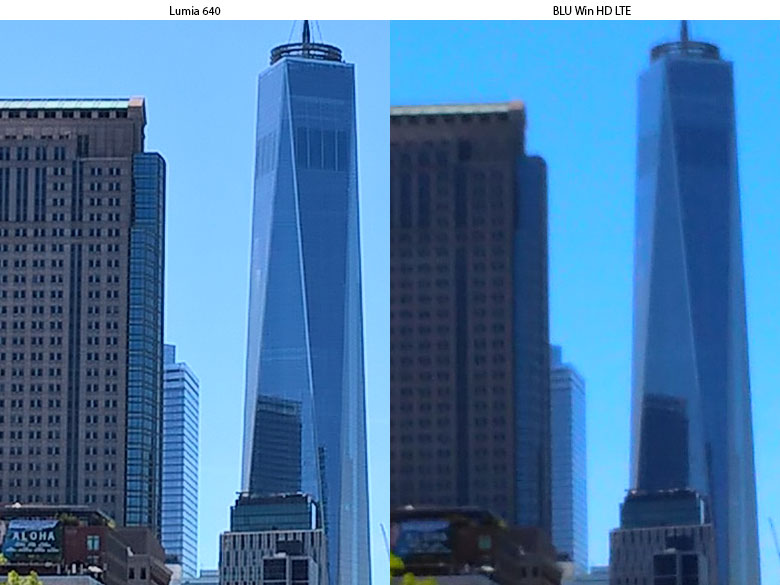 In the above 100% crop sample we can see how the Lumia 640’s 8 megapixel image compares to the BLU Win HD LTE’s 8 megapixel image (which is another Windows Phone in the same price range).  The Lumia obviously has some artificial sharpening filter applied as you can see by the light/dark edges along the buildings, but the billboard in the lower left is actually readable and there seems to be very little noise.

Take a look at the full resolution camera samples below. The first two use the low resolution front facing camera and you can tell that the quality is severly lacking, but it’s better than nothing at this price!  The next 7 samples are well-lit outdoor shots and the Lumia 640 does really well with those. It’s not 41 megapixels good, but with only 8 megapixels to work with, they’re quite acceptable.  The last two are low-light photos, while the last one uses the LED flash along with “rich capture” mode. The LED flash is clearly not very good at lighting up a room. It’s probably only going to be even remotely useful at about arm’s length. 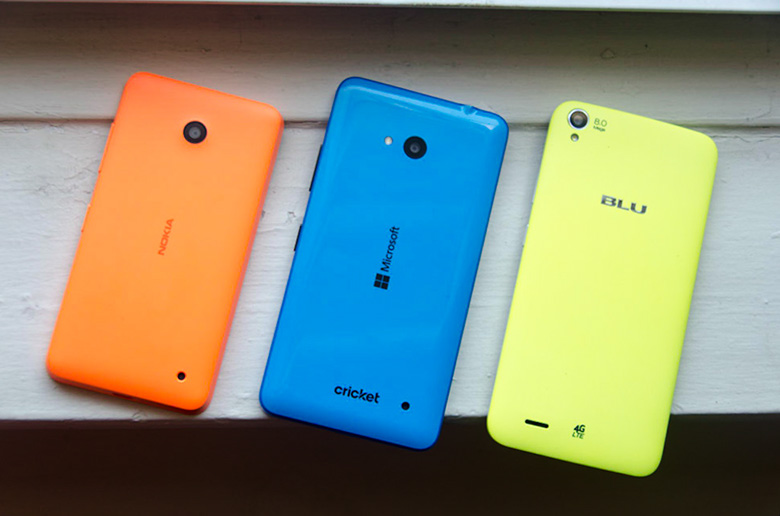 In WP Bench’s battery life test under constant CPU stress, the Lumia 640 lasted for about 3 hours 57 minutes. That’s an hour more than the Lumia 630, and in real life with three or so push email accounts added you’re going to last well through a day and maybe 1.5 days. As mentioned earlier, the BV-T5C model battery with 2500mAh capacity is difficult and expensive to find replacements for though.

Voice calls sound about average on the Lumia 640. The speaker phone mode doesn’t seem to be as loud as the older Lumia 520. As for the LTE performance, we got around 4.7 Mbps download and 3.34 Mbps upload (Cricket is basically running on AT&T’s network). 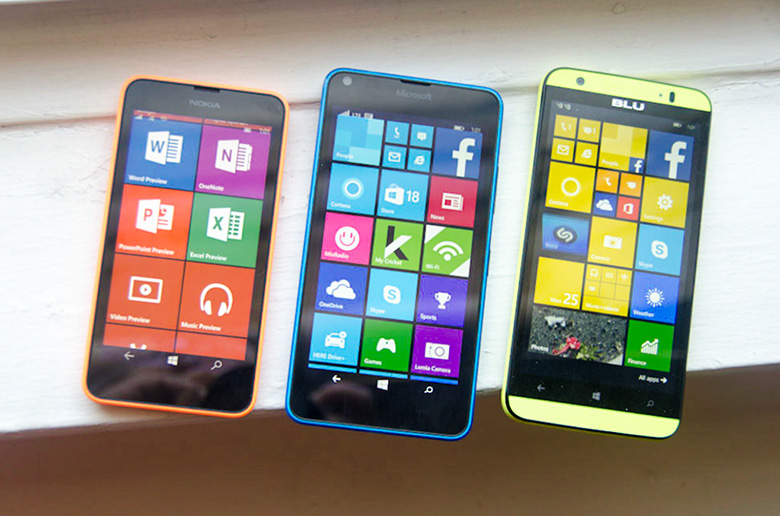 The Lumia 640 has all of the features you would expect from a smartphone that’s twice the price.
It’s got 1Gb RAM, a decent 8 megapixel camera, front-facing camera for video calls, a high resolution screen with practically print quality pixel density, the processor is fast, and it even has a (somewhat limited) version of the excellent Glance Mode. It’s certainly a step up from the Lumia 630 and 635 as well as the 5XX series, and it has a few things that put it ahead of the similarly-priced BLU Win HD LTE. Overall, for the price, the Lumia 640 is a pretty nice deal. 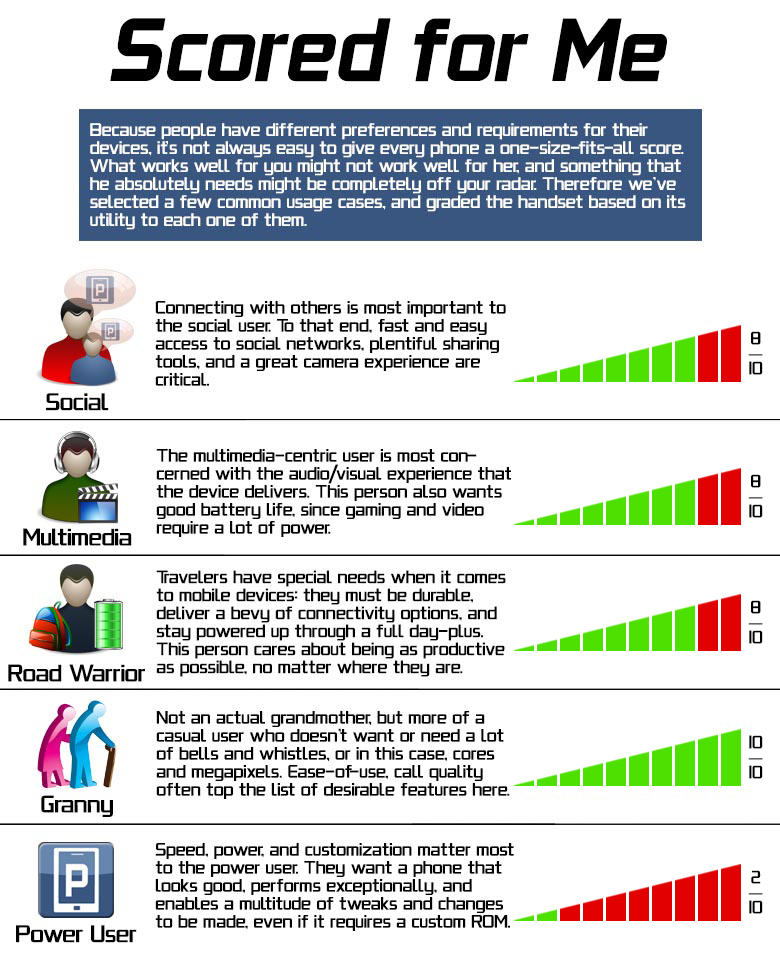 Microsoft now allows everyone to remove their passwords from their Microsoft accounts and log in without one using the Microsoft Authenticator app.