One of the most extensive, diverse, rich and compelling collections of Black Friday 2017 deals unveiled thus far comes from the US Microsoft Store.
Published 14 November 2017, 06:59 EST

Because general retailers like Best Buy, Walmart, Target, Staples and even Amazon tend to copy one another when it comes to Black Friday deals on consumer electronics, it’s often a better idea to go straight to device manufacturers for your discounted holiday shopping.

That is, if you know exactly what you’re looking for, of course. For instance, the official US online Microsoft Store seems like the best place to purchase a sweet Surface Pro or Surface Laptop bundle with some nice savings starting November 23.

If you want to combine a Core i5/256GB SSD configuration of the latest Surface Pro with a black Type Cover, you’re looking at a whopping $329 markdown off the two’s total list price, while a “select” Surface Laptop and Harman Kardon Invoke speaker will cost $199 less than usual. 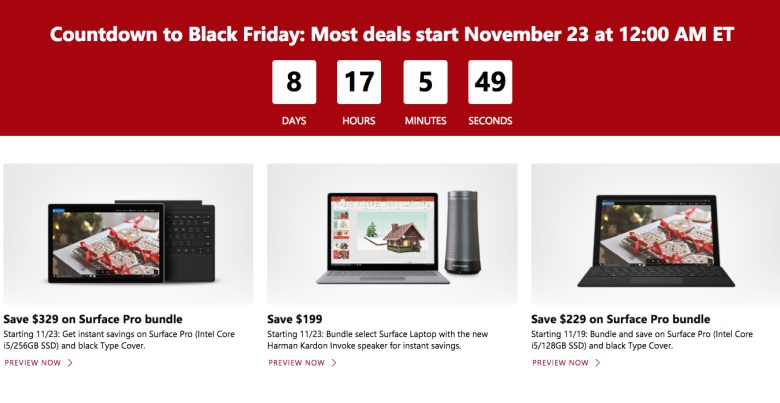 By itself, the Cortana-powered Invoke shall fetch $99.95 instead of $199.95 on Thanksgiving, Black Friday and (presumably) Cyber Monday, whereas a separate Surface Pro combo of the Core i5/128GB SSD tablet and black Type Cover is looking at an early $229 discount on November 19.

Also beginning November 19, you’ll be able to save “up to” $100 on “select” Windows Mixed Reality headsets and motion controllers. Apart from a $299 Lenovo Explorer (currently priced at $399), these deals are unspecified, but given the very young age of the Samsung Odyssey, Dell Visor, Acer and HP WMR products, any discount will do.

Last but certainly not least, those surprising Samsung Galaxy S8 and S8+ Microsoft Editions have $150 savings coming on November 23 in unlocked variants, with the Windows 10-based Alcatel Idol 4S also ready to hit a new all-time low price of $169.