Microsoft closes in on Apple reign over customer delight, Google trails well behind

Apple remains the overall leader of consumer satisfaction, according to a new tech market report, but Microsoft is rapidly narrowing the gap in second place
Published 27 October 2015, 07:29 EDT

Beyond sales numbers, profit margins and net revenue, Apple has always prided itself on the user experience offered by iPhones, iPads, Macs and now Apple Watches, which is constantly billed as vastly superior to the competition.

A recent iPhone commercial even went so far as to claim 99 percent of the owner base “loves” the iOS handhelds, which seemed impossible to verify. But there’s actually a California-based market research firm that evaluates just that, offering up monthly “Battle of the Brands” reports.

In them, Argus Insights compares consumer delight for various hardware products manufactured by Cupertino against Microsoft, Amazon, Samsung and Google devices. Unsurprisingly, the Tim Cook-led outfit has headlined every such chart from January through September 2015, but you’re probably never going to guess who sits in a close second position. 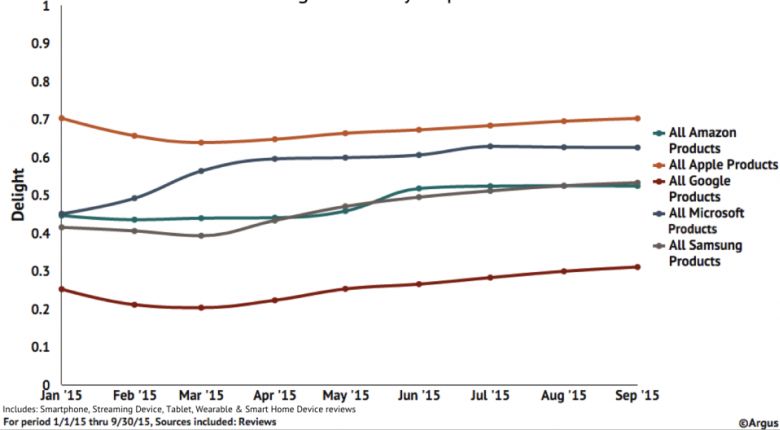 It’s Microsoft, believe it or not, riding a steady wave of Surface Pro enthusiasm, as well as increased satisfaction levels from Lumia proprietors. The best news of all for Windows fans is Microsoft’s crowd-pleasing figures are on the rise, while Apple failed to boost its early-year scores. If Redmond can keep the trend up, don’t be shocked to see a new Argus ranks leader in a few months.

Meanwhile, Amazon and Samsung seem dead-locked in a fierce battle for the last spot on the podium, whereas Google is a vexingly distant fifth. “Disappointing” Nexus gadgets share the blame for the search giant’s distressing results with Chromecasts and Nest smart home offerings. Amazon’s most agreeable products are the Echo and Fire TV, with the Fire TV Stick at the opposite end of the spectrum, and Samsung reportedly suffers from a lack of compelling proprietary software content.