Find out what software Michael Fisher uses on his Lumia from day to day in the latest installment of the Pocketnow Insider: Windows Phone apps edition!

“What are your favorite Windows Phone apps?” is a question I never get asked on the internet, mainly because people are too busy asking me what my daily drivers are, despite the fact that it’s all there in my Twitter profile.

But it’s an important question. Because even though I feel that you shouldn’t carry a particular device just because I carry it, the question of which apps and services we opt to use is another story. To step back to 2008 for a second: apps are magical things. As we discovered on a recent episode of the Pocketnow Weekly podcast, almost all of us can remember downloading and installing our first-ever app, even if that milestone took place over a decade ago. Without apps, smartphones would offer only the merest shell of their current capabilities.

The question is especially crucial when it comes to Windows Phone apps. Microsoft’s ecosystem still lags behind its iOS and Android competition, but with over 300,000 titles now available, there’s actually quite a bit to choose from – and some of it might surprise you with its quality and attention to detail.

Here, then, is a small slice of the app catalog I’m presently rocking on my mellow-yellow Lumia 1020. 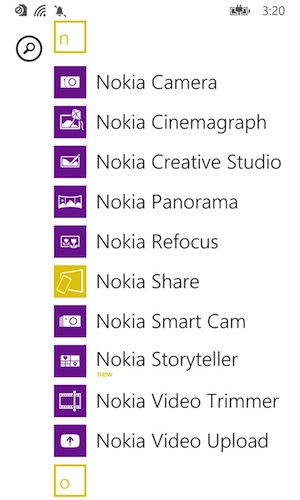 As we mentioned in our HTC One M8 for Windows review, the release of Nokia’s HERE travel suite to the broader Windows Phone community was a huge step in legitimizing the platform at large. Bing Maps may suit your needs in countries far and wide, but here in the Northeastern US it’s historically lagged far behind the capabilities of Google Maps (which you can find via an acceptable but ad-supported third-party app called gMaps). It’s still a little annoying to be faced with a choice between four separate titles –Bing Maps, HERE Maps, HERE Drive+, and HERE Transit– when I want to get somewhere, but I still use all of these apps regularly, and they’re getting better every day. Whatever Windows Phone you’re carrying in your pocket or holster, you can download them.

Nokia still maintains a tight grip on its other exclusive creations though – most notably the ones offering enhancements to the phone’s camera. The Nokia Camera comes preloaded on Lumia-branded phones, as does the Nokia Creative Studio for editing, and lenses like Nokia Panorama. The real fun starts when you download Nokia Refocus, which provides the faux depth-of-field effect in vogue these days, and Nokia Cinemagraph, which feeds your need for all things GIF-tastic.

Combine that with utilities like Nokia’s Storyteller, Video Trimmer, and the MixRadio music-streaming service that Adam Lein loves so much, then toss in Treasure Tag support and other nice touches like PhotoBeamer and the various upgrades that come with the Cyan update, and it’s easy to see why so many of us have opted for Lumia-branded Windows Phones over other contenders.

Windows Phone apps that help me fit in 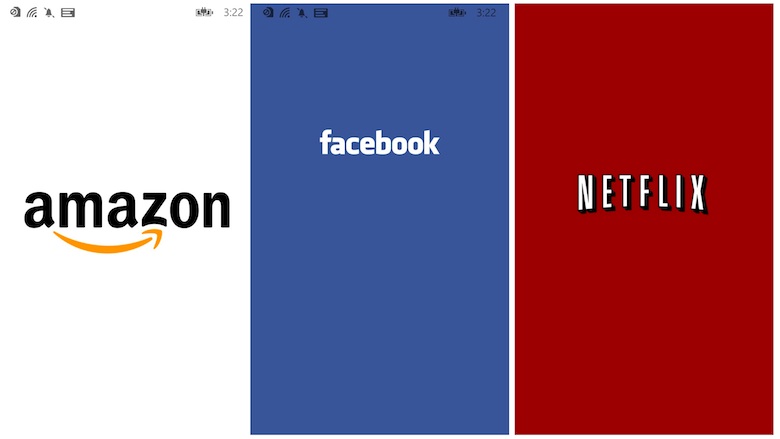 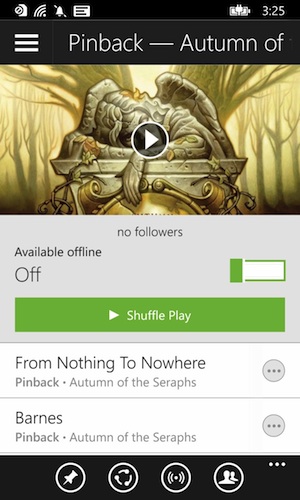 Unless you’re surrounded by people who spend their days and nights entirely ensconced in the Microsoft ecosystem, owning a Windows Phone can pretty easily get you feeling left out. Almost the entire suite of Google apps and services is out of the question, and many popular titles come to Windows Phone months after their introduction on other platforms … and often, updates thereafter are few and far between.

But if you’ve never considered a Windows Phone because of the “app gap,” you might be surprised by just how many familiar titles the platform offers in the Windows Store. Here’s my list of first-party apps that keep me up to speed with my more-mainstream friends.

Windows Phone apps that help me stand out 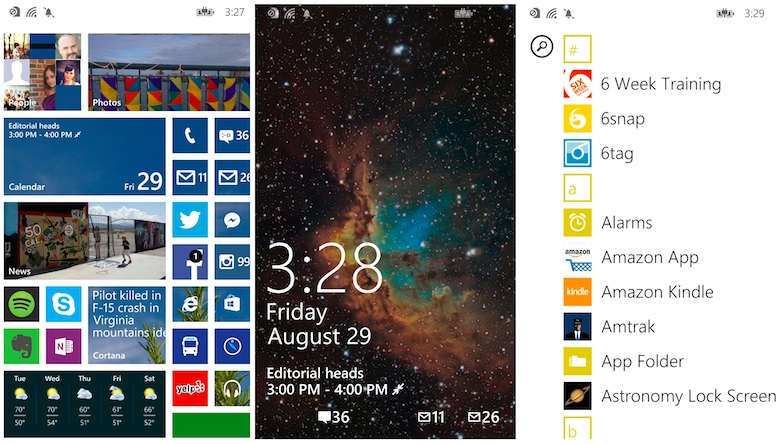 As I say, not all of those apps deliver a first-class experience. Others, like the official YouTube “app,” are nothing more than thin wrappers for a mobile site … a capital-L Lame result of the Microsoft-Google feud. So third-party developers have stepped in to fill those cracks with a set of titles that are truly exemplary, many of which are so beautiful or functional –or both– that they eclipse their official counterparts on other platforms. We’ve talked about the specific YouTube example before, so here’s a few of my faves from other regions of the Store. 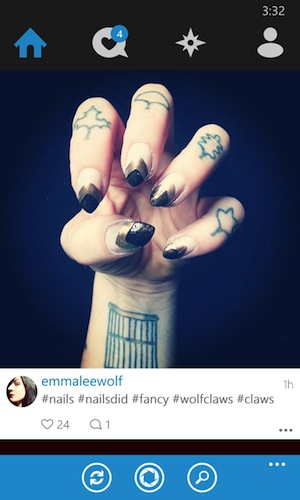 Developer Rudy Huyn outdid himself when he crafted this app back in the days before Instagram officially landed on Windows Phone. Desire for the photo-sharing service was so great that Nokia actually created a social-media push to gain the Facebook-owned network’s attention. In the intervening time, Huyn built 6tag from scratch, and the result was so gorgeous that Instagram lent its unofficial endorsement to the whole project. Even now, 6tag remains my preferred Instagram title – which considering the stagnant nature of the stillborn Instagram BETA app, shouldn’t be a surprise.

Unlike Instagram, Snapchat hasn’t yet ported its self-destructing-photo service to Windows Phone. Because I’m neither a teenager nor a compulsive sexter, this app carries little allure for me, but for a few months this past winter my friends and I used Snapchat as a community destination for absurd photos and short videos. I was therefore grateful to have 6snap available when I wanted to leave my Moto X at home, but didn’t want to miss out on the latest ridiculous cat video from my friend down the street. (They’re long, strange winters here in New England.) 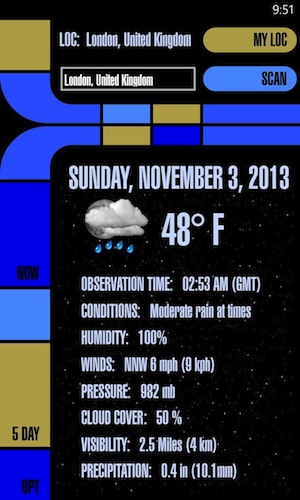 Those who read Taylor Martin’s piece on which apps the Pocketnow team enjoys will recall my praise of the Android app Muzei, which cycles through astronomical or space exploration-related images to keep my Android homescreen fresh and exciting. Martin Suchan’s Astronomy Lock Screen does much the same thing on my Lumia 1020, automatically downloading and displaying an Astronomy Picture of the Day to keep my smartphone laden with the nebulas and planetary photographs I so enjoy.

And speaking of space: every science fiction fan has taken a moment to appreciate that the modern smartphone is the ultimate manifestation of a sci-fi fantasy from not that long ago. Seeking to bring the interface of yesterday’s future to today’s … present, Davstar Apps has whipped up an outstanding LCARS simulator for all Star Trek fans to enjoy. It has very few functional benefits, keeping to the old standards of Calculator, Browser, Clock, Weather and Text Editor, but it’s great fun for anyone who carried a fake tricorder around the woods as a child and wished it was real. Trek fans should go grab it before CBS Consumer Products sends Davstar a cease-and-desist, in the grand tradition of all galactic scumbags. 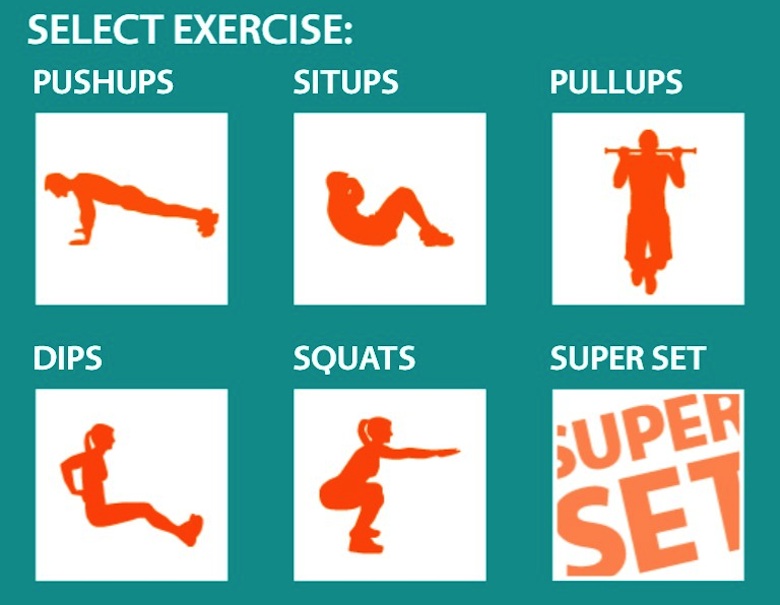 Herm’s Software’s 6 Week Training and Microsoft’s own Bing Health and Fitness hub both reside on my Lumia 1020, and each provides an excellent daily workout for my thumb as I quickly scroll past them to avoid thinking about how little exercise I really get.

Windows Phone apps that help me get things done

Finally, there’s the apps that make it possible for me to accomplish things, from the banal to the … slightly less banal. Because I know you’ve been wondering, here’s how I stay so damn productive. 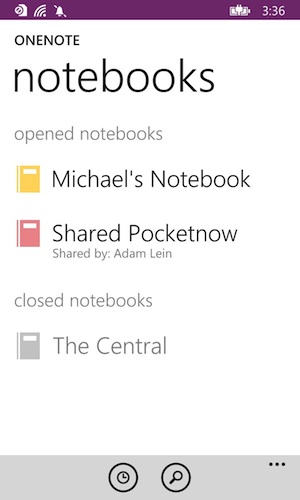 Evernote is one of my favorite app finds of all time. Ever since downloading it to my original-recipe Palm Pre in 2010, I’ve used it to take notes on everything from classes to press events to hard-boiled egg recipes (I’m not that great a chef). But Evernote’s Windows Phone app … well, isn’t very good. So despite the fact that I run screaming from most Microsoft Office software out of a reflexive hatred of all things straitlaced and corporate … I use OneNote a whole lot. And thanks to its clean interface, instant syncing, cross-platform functionality and simple folder structure, I just adore it.

The financial apps I use for my various bank accounts have been better than others at staying updated on Windows Phone, possibly due to the endless security refreshes banks need to implement in order to combat the constant threat of the hax0rs. Whenever I see a TV commercial telling me about the latest mobile app benefits of banking with the Bank of Orion (or whoever), I hop over to my Lumia expecting to be disappointed … and then find myself grinning like an idiot when I realize that yes, I too can scan a check and deposit it wirelessly. 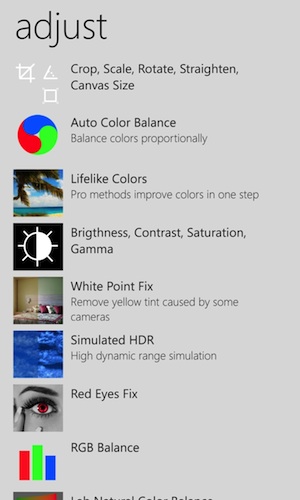 I’m not sure if you’d call photo editing “getting things done,” but considering that you could use the Lumia 1020’s 41MP camera as a stand-in for a professional shooter (as I sometimes do), I’m going to put these apps into this category anyway.

In brief: these are some of the best photo editing titles I’ve ever seen for bridging the gulf between capability and user friendliness. Whether it’s filters, effects, frames, layers, or color manipulation you’re looking for, these programs have got it in about twenty different flavors. And while they take some time to get used to, they’re by no means complicated; it took me much longer to learn how to work Adobe Photoship Express than it did to learn either of these. Best of all: they run very well even on the 1020’s aging Snapdragon S4 Pro, so trying them out on a more modern Windows Phone should give you no trouble at all.

The most undercelebrated manufacturer software around is probably Microsoft’s Bing suite, which provides much more functionality –in a much more beautiful wrapper– than you’d expect from a search-engine brand that’s been so maligned over the years. Bing News is great (I actually prefer it to BlinkFeed on the new HTC One M8 for Windows), but Bing Travel, which I first used extensively on the Lumia 2520 some months back, really takes the cake for utility and layout. You can track flight status and search for hotels, get trip ideas from various sources, see news tailored for specific regions, and –my favorite– get recommendations for activities in specific cities, complete with both professional and crowdsourced photos from the user community. It’s a great example of what’s possible when a great idea is implemented with care, and it’s something Microsoft should be advertising more when it comes to the undervalued platform that is Windows Phone. 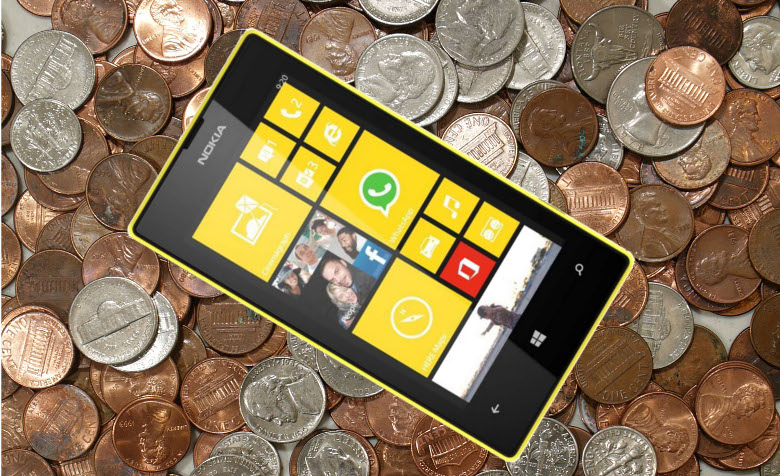 I’ve got other apps on my Lumia (including some games like Sparkle 2, Implode and Rise of Glory that you’ve seen me pimp again and again on video reviews) but it’s been 1800 words and I’ve gotta get to work on that IFA preview piece I promised you on this week’s podcast. While I go handle that: hop on down to the comments to tell me and everyone else what apps you’re rocking on Windows Phone. We’ve got a few months till After The Buzz time for this HTC One M8, and I want to have some sweet new apps on there by the time it’s ripe for filming!