MediaTek is definitely not a popular name for flagship smartphones, but this is the company that has enabled one of the best “performance-to-price” ratios that’s currently powering a ton of phones in Asia. Even so, we do see companies like HTC choosing MediaTek processors for some flagships lately, so it does seem that the company is focused on gaining trust in the flagship smartphone market, and today’s product launch says a lot.

MediaTek just held a press event to announce its new Helio X20 MT6797 processor. What makes this new product hot is that it takes a step into the 64-bit deci-core arena. We’ve got four ARM 1.4GHz Cortex-A53 cores for basic processing, four 2GHz ARM Cortex-A57 cores for middle to heavy usage cases, and two 2.5GHz ARM Cortex A72 cores for maximum power. Sadly this new processor is made under the now old 20nm process, and it only seems to support 993MHz LPDDR3 RAM, at a time when Qualcomm and Samsung support the latest 1600MHz LPDDR4 RAM modules. It’s also limited to LTE Cat-6, something that competitors already better with LTE RAMCat-9 support.

It does incorporate an ARM Mali-T880 MP4 GPU clocked to 700MHz, which is good for encoding & decoding H.265 4K/2K video at 30FPS, while powering up to 2560×1600 resolution displays. The chip is also certified for up to 25 megapixel camera sensors, and it can also support Native3D 2.0, which allows you to take 3D photos.

We should see the first smartphones supporting this new processor later this year. The slide below portrays how it compares to the Qualcomm Snapdragon 810. 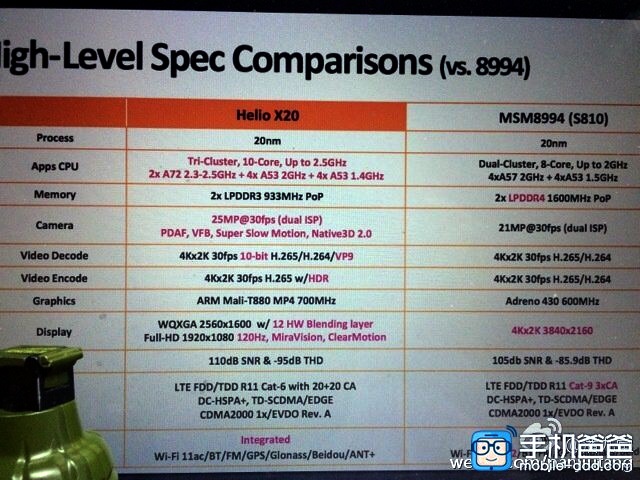