The new Huawei MateBook and Samsung Galaxy TabPro S seem very similar in a lot of ways. Find out how they’re different and which one might be more likely to replace your laptop.
Published 28 June 2016, 08:00 EDT

Huawei’s press conference launching their new MateBook 2-in-1 tablet PC sounded a lot like the press conference where Samsung launched their 2-in-1 Galaxy Tab Pro S tablet PC, so we think these two non-Microsoft-made Windows 10 tablets deserve a little comparison. Both are very close to the same size, both are very thin at less than 7mm, and both are very light. Both use Intel Core m processors with HD 515 GPU chips. Both have only a USB-C port and 3.5 mm headset jack for peripherals… except for a proprietary keyboard connector on the bottom edge for the detachable keyboards… which both tablets are designed for.

At both Huawei’s and Samsung’s press conferences announcing these tablets, points were made about how this 2-in-1 tablet PC market is a high-growth area. Samsung said that it had a 40% yoy increase, while Huawei said that this market had a 73% yoy increase. These announcements were a few months apart, so maybe the data changed a bit, but either way, we’re talking about a market that has some good potential for growth where as the consumer iOS and Android tablet market is in decline.

Let’s start with looking at the differences in specifications:

Huawei’s lowest cost model matches the processor, RAM, and SSD configuration of Samsung’s only model for $200 less, but Samsung includes the keyboard cover while Huawei’s keyboard cover is an extra $129. That still puts Huawei ahead by about $70. Huawei also wins on weight with just a little bit less mass than Samsung. The screens are the same size and resolution, but Samsung uses SuperAMOLED while Huawei uses IPS, and you’ll see the difference up close below. Huawei also has much better optional accessories. The Huawei MatePen supports hover actions, 2048 pressure levels, wireless presentation controls, and it even has a laser pointer for only $59, while Samsung’s stylus is a Bluetooth capacitive model that costs more and has less functionality. Huawei’s MateDock port expander has far more options and utility than Samsung’s Multiport adapter for the same price. Samsung does beat Huawei in battery capacity and battery life though. 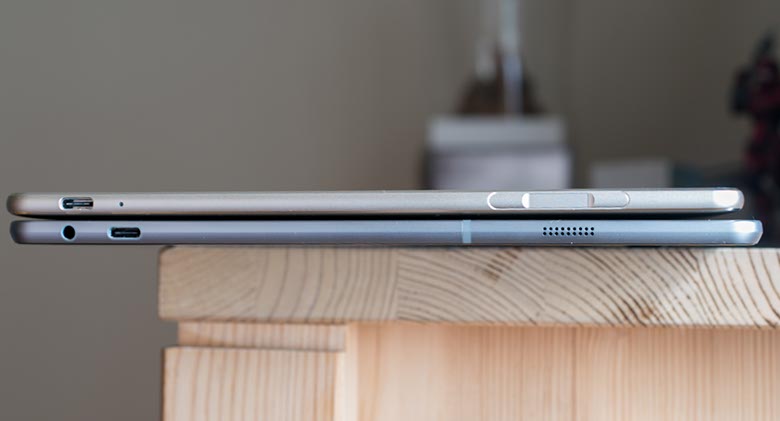 When it comes to thickness, the Huawei MateBook and Samsung Galaxy TabPro S are a few 10ths of a mm different. 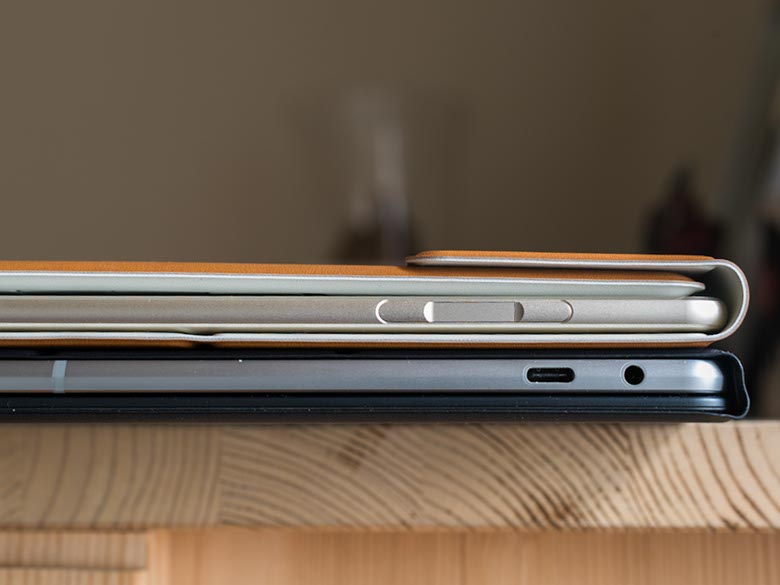 Adding the keyboard covers to both devices changes the thickness difference drastically. Samsung’s cheap plastic keyboard is certainly thinner, but we kind of prefer the gorgeous leather of Huawei’s keyboard. 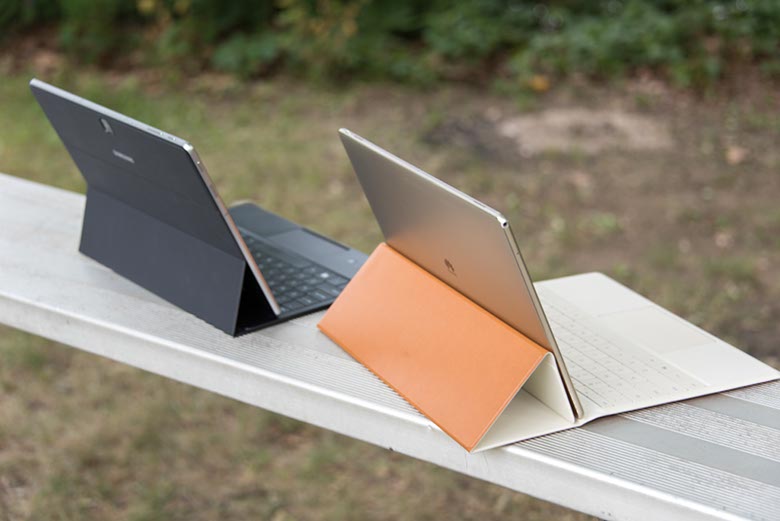 Both keyboard stands offer two display angles for holding the tablet. Samsung’s cover depends on the camera hole and magnets to stay attached. That’s not very secure if you tap the touch screen just a little too hard. Samsung’s second display angle is practically flat though and that is great for use on your lap. Huawei’s keyboard configuration has a wider base when set up as a stand. This makes it more stable and since the leather flap is folded under the tablet, it would accidentally slip if you’re using the stylus or your fingers on the touch screen. The 2nd display angle moves this flap up along the back of the tablet and adheres using magnets, which are going to be less secure. 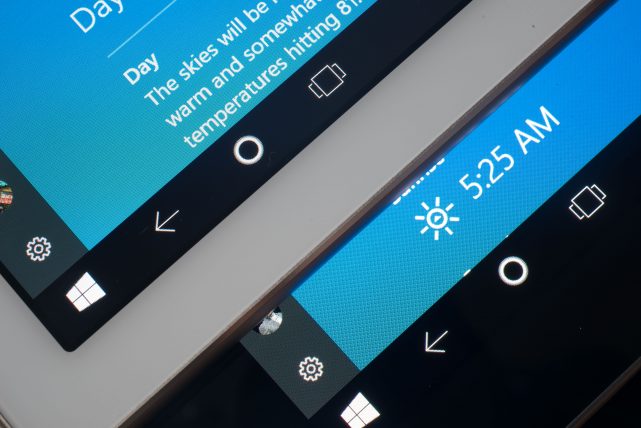 The differences in screen tech are certainly noticeable when both tablet PCs are placed side by side. Samsung’s Galaxy Tab Pro S has much more saturation, but both are very great looking displays. If you click the photo above, you can see the full resolution version where you’ll see the difference in pixel structure of the two displays; Samsung’s on the bottom right and Huawei’s on the upper left.

What do you think? Which of these new 2-in-1 Windows 10 tablets do you think could win a bigger piece of that fast-growing tablet PC market? Let us know in the comments below.