When Huawei announced its new smartphone lineup at CES earlier this month, it followed up the hoopla with its usual generosity. That is: it gave everyone in attendance a review sample of either its new Mate 8 phablet, or a gold-colored refresh of the Nexus 6P. My colleague Jaime Rivera, perhaps anticipating an After The Buzz video in his future, went for the 6P. But despite my deep respect for the newest Nexus, I sprung for the weirder of the cousins for two reasons: I knew Pocketnow would have to post a Mate 8 review, and I wanted to write that review.

The last Huawei smartphone I reviewed (besides the Google-designed 6P) wasn’t even a flagship; it was the mid-tier Ascend Mate 2 released in the summer of 2014. But this was no ordinary midranger. The otherwise-unassuming Ascend Mate 2 was to almost single-handedly ruin my expectations for smartphone battery life going forward. By integrating a then-massive 3900 mAh power pack and keeping the screen limited to 720p resolution, Huawei managed to create a smartphone that could last a full weekend of even heavy use. After seeing figures like 9.1 hours of screen-on time over a 44-hour period, I hoped we were on the cusp of a new era – one where “smartphone” didn’t have to be synonymous with “where’s the closest outlet?”

Those hopes were dashed pretty quickly once I realized that manufacturers were much keener to build thinner phones with higher-resolution displays than they were to focus on endurance. While there are compelling arguments to be made that super-dense screens aren’t to blame for our current battery-life crisis, it’s also tough to completely absolve the Quad-HD revolution. I’ve reviewed over 33 smartphones since my time with the Ascend Mate 2, none of which have even come close in endurance.

So it seems only right that it’s another Huawei phone that finally comes close to impressing me in the battery life department – and this time it’s anything but mid-tier. At prices ranging from €599 to €699 with an all-metal build, 16MP camera and the one-two punch of a Kirin 950 chipset and an available 4GB of RAM, the Mate 8 is very definitely a flagship smartphone. My overall conclusions will have to wait for the full review, but on the spec sheet alone the Mate 8 is a very capable device – and in the hand it feels every bit the halo product it is.

The lone hardware concessions –and you know where this is going– are in thickness and the display. At 1080p, the Mate 8 packs a pixel density of “only” 368ppi, and we may as well round up its 7.9mm thickness to a solid 8mm. And, folks, if we’re calling those “concessions,” we’re having ourselves a good day. Again at the peril of spoiling the review, the Mate 8’s dimensions feel just right for the class of device it is: too big for some, absolutely, but in the depth dimension it’s just about perfect. And as for the display: well, the first few days I used the Mate 8, I couldn’t remember what the screen resolution even was. I assumed that it was a Quad HD panel because of how sharp it looked and because Huawei opted for a dpi setting that allowed a lot of information to be crammed into its 6-inch diagonal. It was only after examining the endurance figures that I started to wonder if this might be a “mere” Full HD display. In short: it was the battery life, not an overly visible pixel mat, that made me question the screen resolution.

And how is that battery life, anyway? In a word: glorious. While it hasn’t lived up to the crazy numbers of the Ascend Mate 2 (or other mid- to low-end devices built specifically for endurance above all), the Mate 8 has given me the best battery life of any high-end smartphone I’ve used, apart from LG’s first G Flex. On my first charge-discharge cycle, during which I was on a vacation and used the phone only moderately, the Mate 8 lasted so long I lost track of the number of days it had been since I charged it. When I got my wits about me and started tracking the phone’s power consumption, I found that the Mate 8 would last me two solid days of moderate to heavy use, including extended periods serving as a mobile hotspot. On the most recent cycle (which lasted from 12pm on the 16th to just before 9am on the 18th – about 45 hours) the phone made it through 7 hours and 24 minutes of screen-on time.

That’s plenty impressive on its own, and it only gets more notable when you take into account that I wasn’t being even the slightest bit careful about my power consumption. When the phone warned me that the battery was getting low and offered a variety of power-saving options, I declined. When it alerted me that various apps were consuming power in the background (looking at you, Facebook/Twitter), I let them keep running. Even tiny steps like reducing the brightness a little, I left un-done. I abused the hell out of the Mate 8’s battery and it gave me almost 7.5 hours of screen-on time over the course of two days. That alone puts it in the running for Longest-Lasting Flagship certificate – not to mention the far-more-prestigious Phone I Might Use At A Trade Show award. 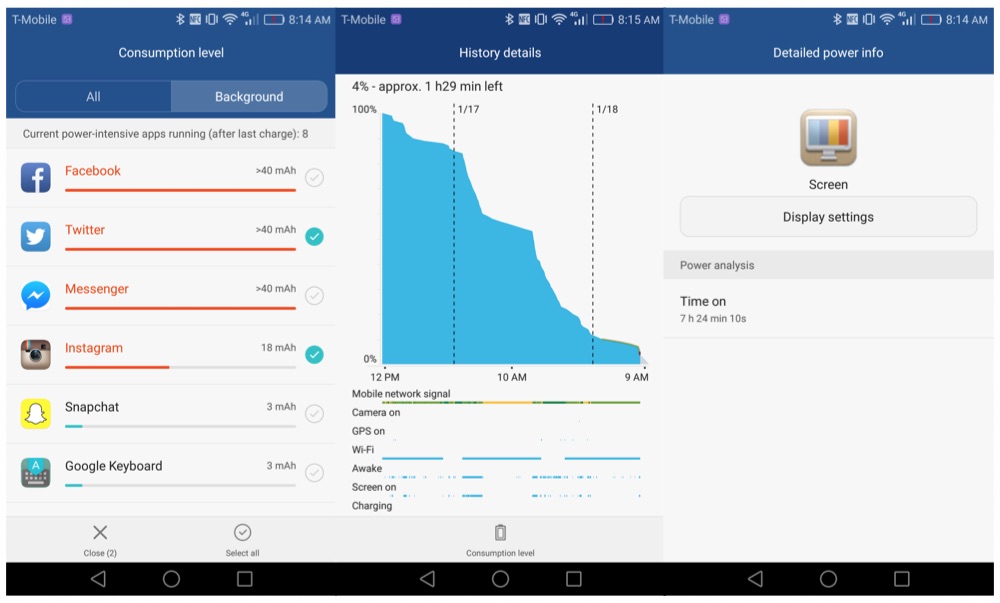 Variables? Yeah: I used the phone on T-Mobile US in a well-covered area (Greater Boston), without a wearable connected (which is not my usual custom) and in the post-CES, pre-MWC slump, I guess I’m getting slightly fewer emails than usual. Plus, this is my first time using a phone with this software build running on this particular chipset. There’s plenty of “your mileage may vary” to go around – and anyway, I’m sure you’ll be telling me down in the comments all about how you somehow got 14 hours of SoT on your Galaxy S6 by only using it in Ultra Power Saving Mode or whatever. (Actually, I look forward to hearing about that; please do chime in with your own accounts of awesome battery life.)

But before the full Mate 8 review drops and before we move on to talking about other phones, it’s valuable to take a step back and observe what can happen when a manufacturer decides that 8mm is thin enough. That Full HD, even at 6 inches, is sharp enough. That what matters is being able to use your phone without constantly sweating about where the closest wall plug is. And from what I can see, no one in today’s upper echelon of smartphone makers is doing that better than Huawei is with the Mate 8.

A new video shows off a possible dummy unit of the Huawei P50 Pro. The video reveals some of the ports, display, and circular rear camera setup.

Check out the latest rumors about the upcoming Samsung Galaxy Z Fold 3 and the Galaxy Z Flip 3 that could launch on the next Galaxy Unpacked
YouTube 1.8M
Facebook 570K
Twitter 197K
Instagram 133K
RSS