It may have taken a whopping six months, during which time the vast majority of Android users weren’t even allowed to dream of Marshmallow goodies, but at long last, it seems the newest OS iteration is making real headway.

Stuck below the one-percent mark as recently as January, version 6.0 has managed to double its share in the past 30 days, according to official data collected in Google Play in the 7-day period ending on April 4.

That week, it appears 4.6 percent of all Android devices dropping by the Play Store were running Android 6.0 Marshmallow, up from 2.3 percent in early March, but still well behind Lollipop, KitKat and even Jelly Bean’s usage numbers.

The good news is there are finally other desserts decidedly in Marshmallow’s rear view mirror besides archaic Froyo, with Gingerbread somehow able to cling on to a 2.6 percent slice of the pie, and Ice Cream Sandwich marginally on the decline, to 2.2 percent. 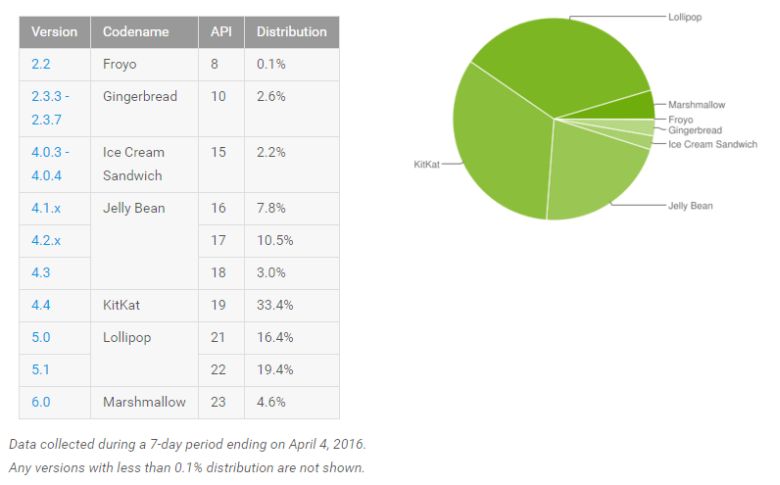 Cold comfort for fans of the world’s most popular mobile platform, which should be well aware of the fact 6.0 will have great trouble surpassing 5.1, 5.0 or 4.4 before 6.1 or 7.0… Nutella (?) enters the picture.

Ironically, 5.1 Lollipop is stronger than ever, surging from 19.2 percent last month to 19.4 now, trailed by 5.0, at 16.4 percent, and obviously eclipsed by 4.4, at over 33 percentage points. When considering the two Lollipop derivations together though, KitKat drops to second place by a margin of more than 2 percent. This fragmentation problem isn’t getting any less ridiculous, it seems.