Welcome to the Touch Bar on the new MacBook Pro (2016)

Big Force Touch trackpad. An OLED Retina Display. And a completely new interaction method that can do way more than a set of function keys ever could.

With a shiny new macOS name and platform with features like Siri integration and Apple Pay, Apple really ought to provide some new hardware to partner with it. Well, in time for the 25th anniversary of the Macintosh PowerBook 170, the company’s first notebook ever, CEO Tim Cook decided to tie that Easter egg to the development of the new MacBook Pro.

Apple’s SVP of Worldwide Marketing, Phil Schiller, described the all-aluminium laptop as “the new gold standard in notebook computers” that comes in 13.3-inch and 15.6-inch sizes. Whether it’s in Silver or Space Gray, the two are the thinnest (14.9mm/15.5mm), smallest (23 percent/20 percent less voluminous) and lightest (3 lbs/4 lbs) MacBook Pro of their class. The OLED Retina Display is 67 percent brighter, has higher contrast ratio and more color. Both units have four Thunderbolt 3.0 ports using the USB-C standard and all can be used to charge the MacBook Pro or go for DisplayPort or any display output with an adapter.

A typical 15-incher will have an 6th-gen Intel Core i7, an AMD Radeon Polaris graphics chip with a 14nm architecture and faster SSD of up to 2TB and transfer rates of 3.1GB per second. Two fairly quiet fans are on-board as well as two stereo speakers with more dynamic range than previous-gen MacBooks.  A 13-inch will get a dual-core i5 or i7 with Intel Iris graphics and the same SSD with the same speeds. Both are touted with 10 hours of battery life.

The new Force Touch trackpad is twice as large as others. Second-gen butterfly switch keys can light up as you press on them (including a new, dedicated Siri key). The top right corner of the board features a Touch ID fingerprint sensor integrated into the power button — supported by its own chip, the T1  — to make it good for Apple Pay on the desktop. If you share a MacBook Pro with someone else, you can instantly switch over to your account with a Touch ID press. 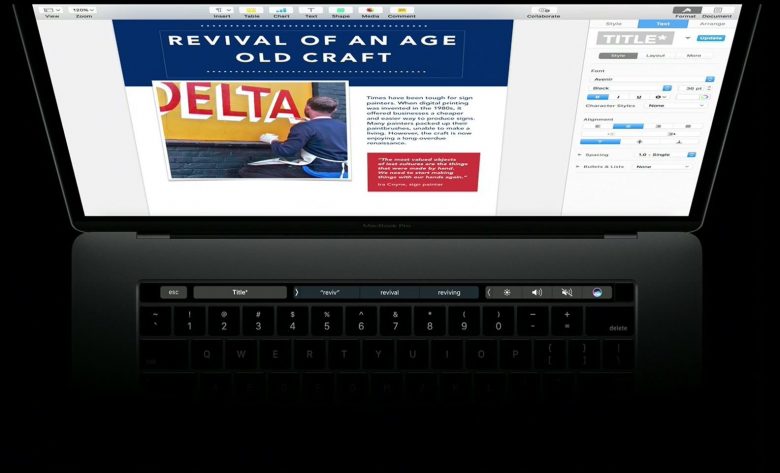 And as the company itself has accidentally leaked earlier, the row of function keys are no more — instead, a thin, Retina Display “Touch Bar” replaces it. Why leave the function keys? Schiller said that the company shouldn’t keep 45-year-old technology around — perhaps also mustering the “Courage” .

On web browsers, you can scroll through bookmarks or even look at the URL bar as you’re typing one in. Quick Type suggestions also appear as you’re typing. Volume, brightness, media playback, file navigation, text color, email contacts, any sort of contextual, learning controls or options for whatever program that can support them, they’ll be on the Touch Bar. And you can bet that Terminal and XCode supports this thing. 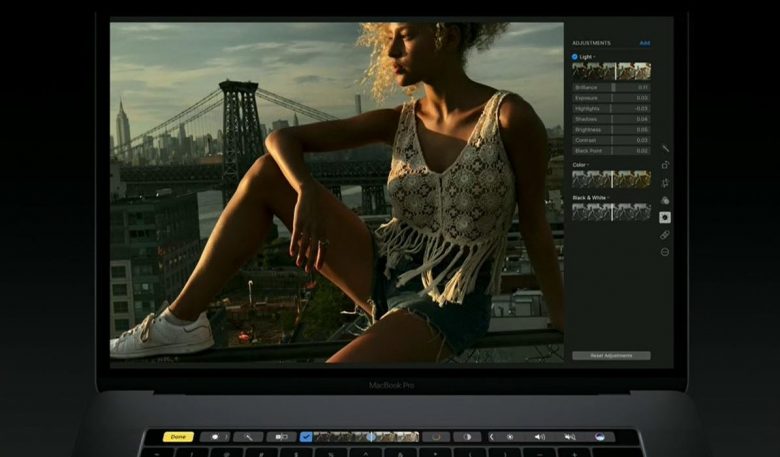 One benefit is that depending on the use case, you’ll end up with just that extra bit of main screen. Extra controls on the native Touch Bar can be dragged from a menu on the main screen down to the Touch Bar. The second benefit, as described by Bradee Evans, design manager for Adobe Photoshop, is that you can use both hands to work on your projects instead of mousing around to small buttons and even smaller pixels.

Speaking of programs that can support Touch Bar, Adobe hopes to integrate Photoshop before 2017. DJ Pro may do the same. Microsoft Office has its own plans, too.

Apple has also worked with LG to make a SuperFine 5K display, priced $599, with integrated audio that can charge the MacBook Pro with its three Thunderbolt ports. 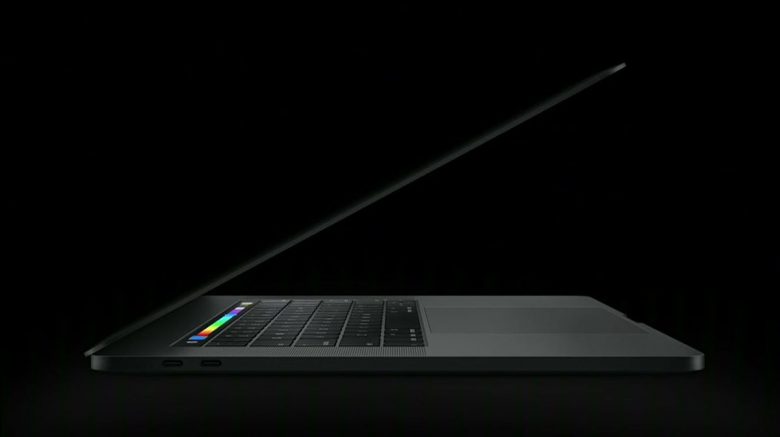 There’s also a “lighter” MacBook Pro version designed for people still on the MacBook Air (though it will still continue to be sold). The function keys remain in place of the Touch Bar and there will only be two Thunderbolt ports. A dual-core Intel i5 will only clock up to 2.0GHz as opposed to the heavier-duty MacBook Pro’s i5 at 2.9GHz.

Configurations will vary, but entry versions will feature 8GB of RAM for the 12-inchers and 16GB for the 15-incher. All will start with a base 256GB SSD. The lighter 13-incher is priced starting at $1,499 while the Touch Bar-equipped one starts at $1,799. The 15-inch MacBook Pro starts at $2,399. Pre-orders start today for all MacBook Pros. The “lighter” one ships today. The others will in two to three weeks.