Lumsing 13400mAh power bank: a reliable solution on the go

Nomophobic much? If you’re commuting, or just away from a charger for long periods of time, check out this Lumsing power bank.
Published 23 November 2015, 09:33 EST

Let’s face it: the sexier (read thinner) our smartphones get, the more battery life becomes an issue. Interestingly, smartphone users (and future, potential owners) would prefer a slightly thicker build if that resulted in longer battery life (or even “functional bulk“), but this appears to be valuable feedback smartphone manufacturers are not taking into consideration (props to the exceptions). There’s a trend for thin and light, and, while many don’t care, more and more are hoping it will go away, soon.

If your daily routine allows you to constantly be within reach of a charger (wall outlet, computer, etc.), you’re lucky. However, if you find yourself commuting, you don’t work in an office (but spend most of your time in the field, or outdoors), or you just keep forgetting or misplacing your charger, a portable battery can be a lifesaver in many occasions. After all, we’re all nomophobic to a certain degree.

We’re familiar with Lumsing’s line of products as we’ve used them in the past as well. Now Lumsing has a new line-up of power banks, and we’re looking at the 13400mAh Most Compact Grand A1 Plus. 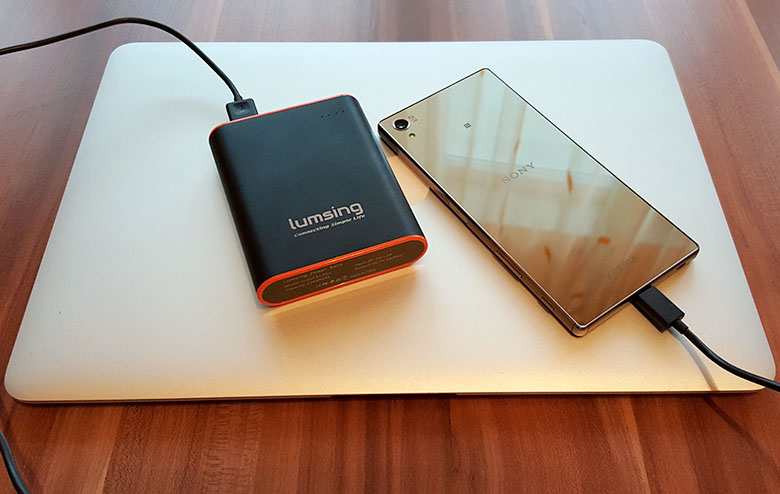 That not so friendly name however, does indeed describe a compact battery pack with a relatively small footprint, considering its 13400mAh power rating. It measures 98mm x 79mm x 21mm, and weighs 260 grams. Yes, it is a little bit bulkier than other offerings out there, but you have to consider the amount of top-ups this battery will offer. At 13400mAh, and, with a charge efficiency of more than 90%, you can easily rely on this battery for two or even three days of being away from a charger. 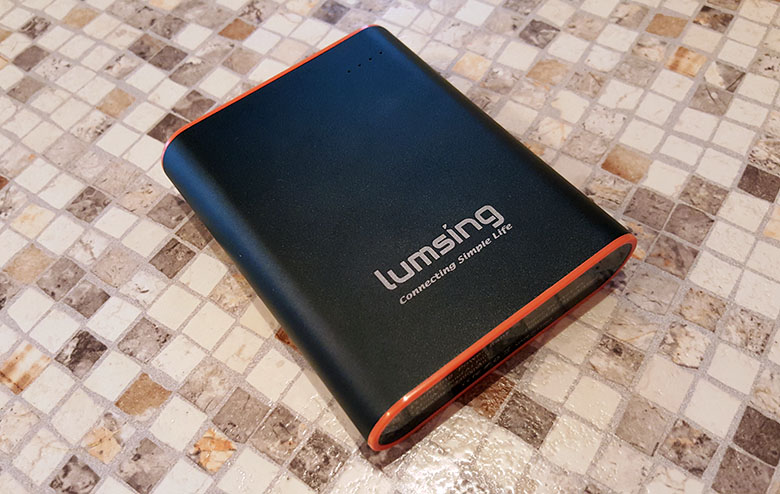 While there’s not much going on inside the box (you get the power bank, a micro USB cable, and some literature), there’s quite some action on the side of the battery. From left to right, there are two USB ports for output (output rated at max 3A), one micro USB port for input, and an LED that serves as a flashlight should you hold the side-mounted power button for about a second. Next to this power button, but on the front, there are four tiny LEDs that show how much juice there’s left inside the Most Compact Grand A1 Plus. 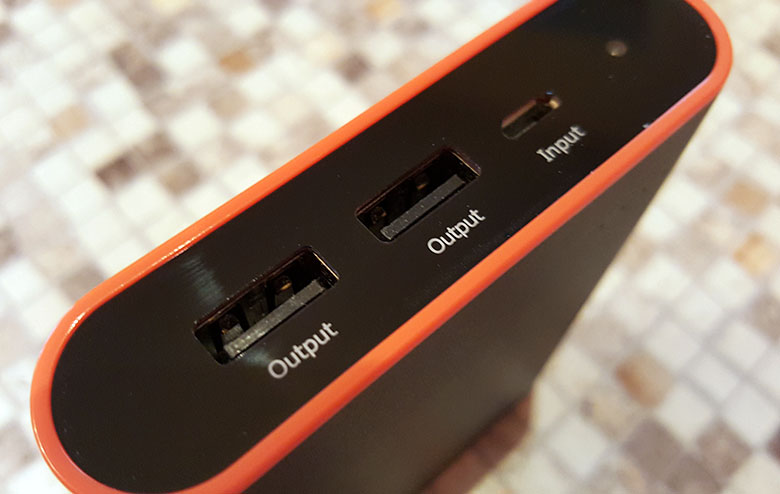 Regardless if you choose black, silver, or gold, you’re getting a product that’s solid, and feels premium. The main case is made out of metal (which is a breath of fresh air in the sea of plastic accessories), it is ergonomically curved, with plastic trims and sides (bottom and top). The LEDs are well aligned with their respective holes, and so are the ports; plugging in cables is effortless. 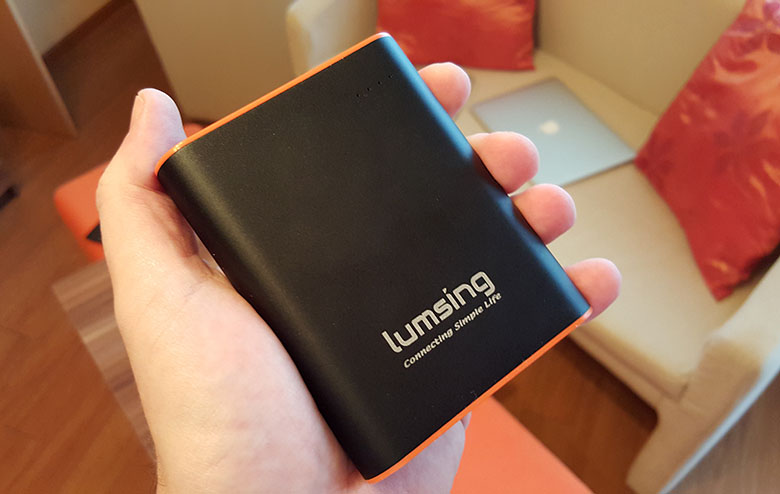 We’ve completely depleted the Most Compact Grand A1 Plus’ 13400mAh battery (rated) three times, resulting in three full cycles, over the course of two weeks. The power bank improved after the first cycle, and, while we were not able to measure the actual charge on the bank itself, we could, however, compare (and add up) the amount of times we were able to charge several different devices.

Whether you’re using it to charge a single device, or two simultaneously, it doesn’t really matter. Consistency is the proper word we’re going to use, in conjunction with reliability. 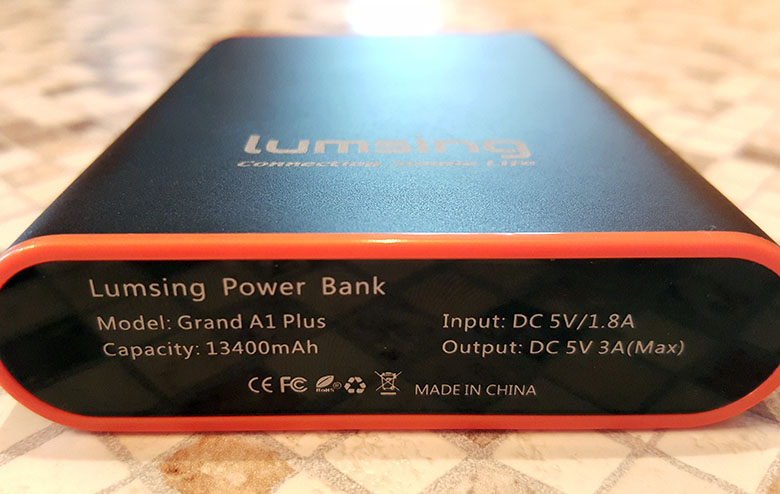 On our second run we managed to charge both smartphones twice each, and we were left with some juice, as the last LED testified (though blinking). For our third run we added a little diversity. In addition to the iPhone 6s and LG V10, we charged the Sony Xperia Z5 Premium (3430mAh), and the new OPPO R7s (3070mAh). We managed to effortlessly charge all four, granted, the battery pack died on us shortly after the last device got charged. 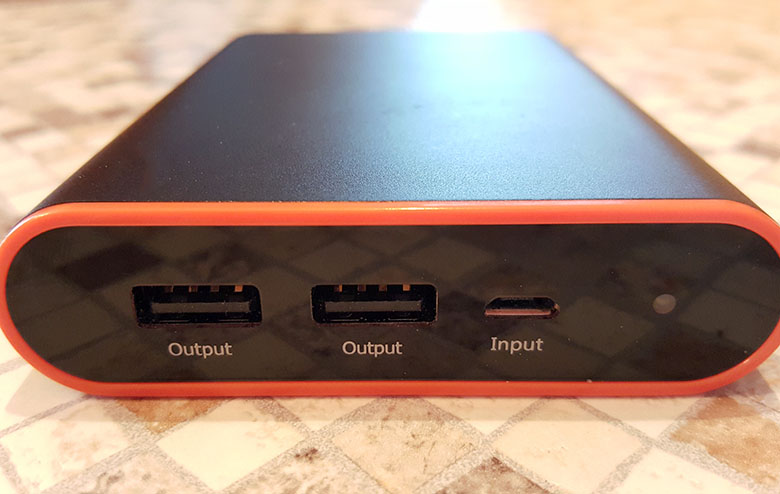 Lumsing is not the only manufacturer of portable power banks, and the Most Compact Grand A1 Plus isn’t the company’s only product. However, if you’re either a power user, or someone that relies more on portable power sources rather than wall outlets or computers, it offers the perfect balance between portability and power.

Adding to all of the above is the great price you’re able to grab this at. Listed at the initial price of $59.99 on Amazon, it now goes for $26.99. However, if you’re a Pocketnow reader, or just stumbled upon this post by accident, you can use the following promotion code (VHUR6WOL) to shave off some more dollars, for a final price of $18.99, which is, the lowest sale price ever, only for Pocketnow readers. If this is something you’d like to have in your accessory bag, you’d better hurry, as promotion ends November 30, just in time for Black Friday and Cyber Monday. 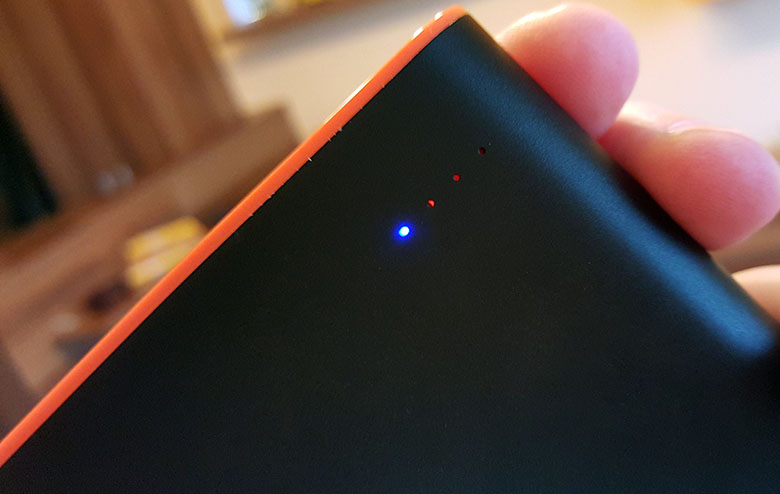