The Microsoft Lumia 950 is the highest-end Windows Phone in years, and we’re enjoying test driving it on the way to our full review. But while its Quad HD display, integrated wireless charging, Continuum technology and feature-packed camera are all very impressive, the cladding surrounding those features is … somewhat less so. In a sea of hefty metal and glass phones, the Lumia 950’s lightweight polycarbonate casing seems like a holdover from the Nokia days (which of course it is). But the Lumias of yore shone in playful shades of yellow, green and orange that hinted at something fun, something alive. Such frivolity is nowhere to be found on the Lumia 950, whose matte black and white covers better reflect the new boardroom focus of Windows 10.

Microsoft built the Lumia 950 for more than the enterprise customer, though; in an interview last week the company told me the phone is also aimed at the Windows Phone fanbase, a small but devoted group of which I still occasionally count myself a part. If you’re one of those fans who, like me, finds something lacking in the 950’s construction compared to older phones like the Lumia 930 and 1520, there’s a solution: the Lumia 950 back cover lineup from Helsinki-based accessory maker Mozo.

The Lumia 950 Mozo covers were on display alongside the phones at the Windows 10 unveiling last month, but our own Adam Lein had to order a couple at retail for us to get a proper long-term feel for them. I’ve been using the brown leather cover for nearly a week at this point, and if I were buying a Lumia 950 of my own, I’d absolutely pick up one of these to go with it.

Given my appreciation for other leatherbound smartphones like the Moto X and LG G4, maybe that’s a predictable stance to take. I think leather is a fantastic choice for a smartphone backing material: it’s soft without being too slippery; it stands out in a crowd; and it usually ages beautifully. And the question is academic anyway, since Mozo currently only offers leather options on its website. 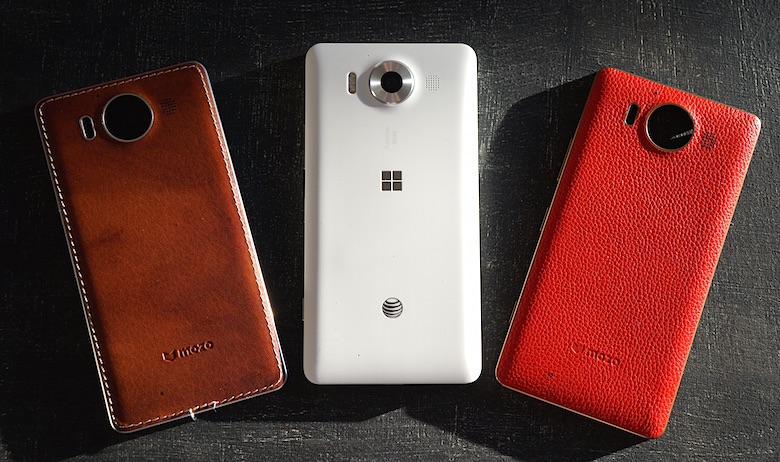 Because the Lumia 950 includes a removable back cover, installation is as easy as it gets: you just pop off the stock cover and snap on the new one. The Moto covers were built specifically for the Lumia 950 and meet all the accessory requirements of Microsoft’s “Made for Lumia” certification program, so it snaps into place easily and feels like a part of the phone when it’s on there. The covers come in black, white, brown and “spicy red.”

I’ve spent most of my time with the brown version, and every time I pull the Lumia 950 from my pocket, I’m glad the Mozo cover is on there. For one thing, the leather is much grippier than the matte polycarbonate of the stock cover, and for another it’s just nicer to look at, with real stitching at the sides and a tastefully minimal “Mozo” stamp in place of the plastic version’s AT&T silkscreen. None of this interferes with the Qi charging, by the way, which works just as well as ever. Interestingly, one of my favorite features has nothing to do with the leather: the faux metallic midplate gives the phone’s sides a touch of distinction –silver on the brown, gold on the red– that’s missing from the polycarbonate version. All the buttons continue to work just as well, and NFC should be unaffected too (though I haven’t yet put that claim to the test).

Lest this become a puff piece, there are some negatives I need to hit. First off, the backplates (and the flip covers that accompany them) aren’t cheap: ordering them from Mozo will cost you between €48.50 and €59.90 (about $51-$63) depending on which you choose, and you may be waiting a few weeks for your order to come in. That’s a lot of money for a backplate, especially when you consider the already-high cost of the Lumia 950 itself. Then there’s the inevitable fraying of the stitching, which you can see on our brown model in the photos above. That seems to happen to every stitched-leather smartphone and tablet, but it still gives us pause. And only time will tell how well the painted-plastic siderails hold up; we have hope the paint won’t rub off over the months, but hope hasn’t always been successful at saving our accessories from self-destruction. 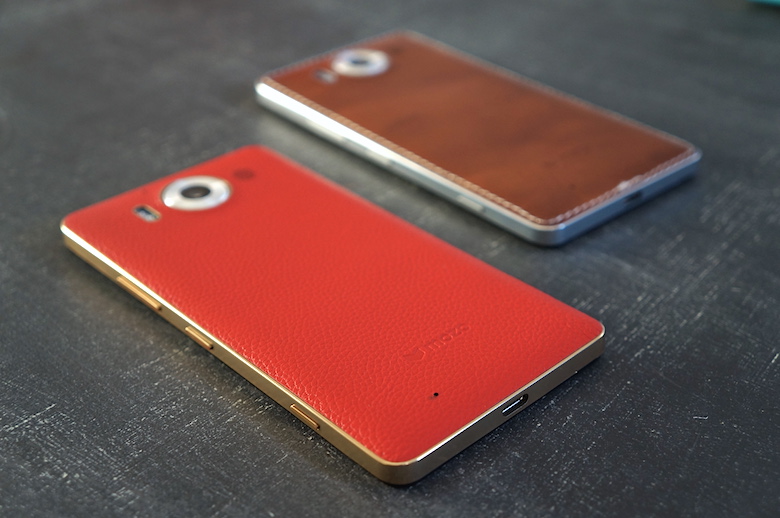 Compromises aside, the Mozo leather case would probably top my list of must-have accessories for the Lumia 950. It’s expensive, but if you’re planning on spending $600 on this phone anyway, you might as well go the distance and make it into a phone that looks the part. As for whether the 950 itself will be on my holiday shopping list this season … stay tuned for Pocketnow’s full review coming next week, and check out last week’s installment of the Pocketnow Weekly podcast for some early thoughts.

Here are the best MagSafe case options for the iPhone 13 Pro!