We’ve got near zero confidence in this source, but it’s still hard to ignore what these apparent Lumia 940 specs are saying about the phone.

You know that grain of salt we sometimes advise you to take things with? Well, consider yourself on a low sodium diet, because we’re going to need you to set that grain of salt down, crush it up into some even tinier bits of microscopic salt dust, and take this new leak with one of those infinitesimal specs; we’ve got a leak to check out that claims to offer some insight into an upcoming Microsoft Lumia flagship, but is this one just too good to be true?

The Lumia 930 launched last spring, and here we see a document attempt to assign some specs to a supposed successor, the Lumia 940. While we’re certainly getting into the timeframe where we might hope to see some early info on such a model arrive, the sourcing on these specs is a bit of a mystery, leaving us unsure of how much faith to place in their provenance.

As for the hardware details themselves, this describes the 940 as keeping the 930’s 1080p panel, while moving from Gorilla Glass 3 to GG4 – something that Corning’s yet to launch. Early access or evidence that this is a fake, we can’t say. And this “Windows Phone10” is similarly something that sounds wrong, but that may be some degree of sloppiness or uncertainty over the final name (Windows 10? Windows 10 for phones?).

The doc shows the 940’s RAM growing to 3GB, the introduction of new 64GB and 128GB storage options, and the move to a Snapdragon 805 SoC.

We also see big news for PureView fans, with mention of a 24MP main camera; the 5MP front facer doesn’t sound half-bad, either.

This all sounds very good, yes, but can we trust any of it? Right now, we just can’t find ourselves placing much faith in these figures. Could they be accurate? Sure, and we’ll be keeping an eye out for any corroboration that might arrive. But this leak on its own just isn’t doing a lot to convince us – not yet. 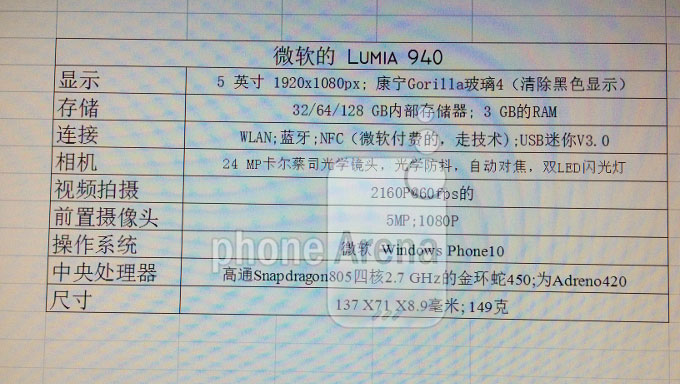