Check out the evidence for the arrival of Lumia 830 end-of-life status, and see what it means for the Windows Phone family of handsets.
Published 11 August 2015, 17:31 EDT

Microsoft’s got new Lumia hardware on the way – and to hear the latest rumors, we could be less than a month away from the debut of some new flagship-level handsets. And while Microsoft’s certainly not forgetting about its Windows Phone 8.1 lineup as the first pure Windows 10 phones emerge, with plans to release software upgrades that will bring those older models the company’s new mobile platform, the company still has to make important decisions about which phones it wants to highlight as these new flagships arrive. That looks like it means one model not quite making it to its one-year birthday before hitting end-of-life status, as Microsoft starts closing the book on the Lumia 830.

A retail leak shows instructions for transitioning company stores away from the 830, replacing it with alternate models on the showroom floor and updating signage to stop referring to the phone. While software support will continue, 830 sales (at least for the phone’s unlocked edition) will likely dry up as available stock is consumed.

Considering the 830 is coming up on a year old by now, it’s not so surprising that it’s reaching EOL, but it’s a little notable that in certain markets – Puerto Rico, at least, according to this leak – it’s being replaced in-store by an even older model, the HTC One M8. In any case, we’re probably going to see a big shift in Microsoft stores as new Lumia models start launching over the next few months, and the 830’s retirement is only go to be the first of many changes. 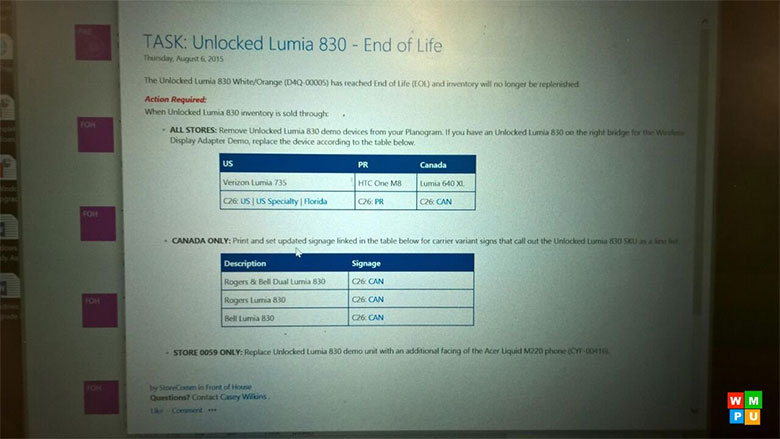