Get the latest details on the Lumia 1520 release plans, as well as those for the Lumia 2520 tablet.

What the heck is going on with Nokia’s Lumia 1520 and the phone’s retail availability? We just saw pre-orders open, apparently with the intent to make the handset available on November 15, only to have Microsoft subsequently do an about-face, insisting that the orders went live prematurely, and putting a halt to them. So where does that leave us? Well, if we’re to believe the latest leak, the 1520 is still on its way, but just a little later than expected, and should be showing up arm-in-arm with the Lumia 2520.

Leaks identify the retail launch date for the 1520 at AT&T as Friday, November 22. Verizon should get its 2520 the very same day, and AT&T could even see its tablets arrive a day earlier, getting the black 2520 on November 21.

We also get a little pricing update, thanks to a separate leak out of Verizon. It appears that the carrier will be putting the 2520 on sale right from the start, using it as part of its Black Friday promotions. That means making it available for about $400 on-contract. We’re not sure if that’s a good deal or not, though, as the leak also names Verizon’s non-sale yet still on-contract price as $500 – which is what we thought the free-and-clear no-subsidy, no-contract 2520 would sell for.

While a little outside our wheelhouse, November 22 is also when the Xbox One is set to arrive, giving Microsoft the ammo it needs for a real cross-platform retail blitz. 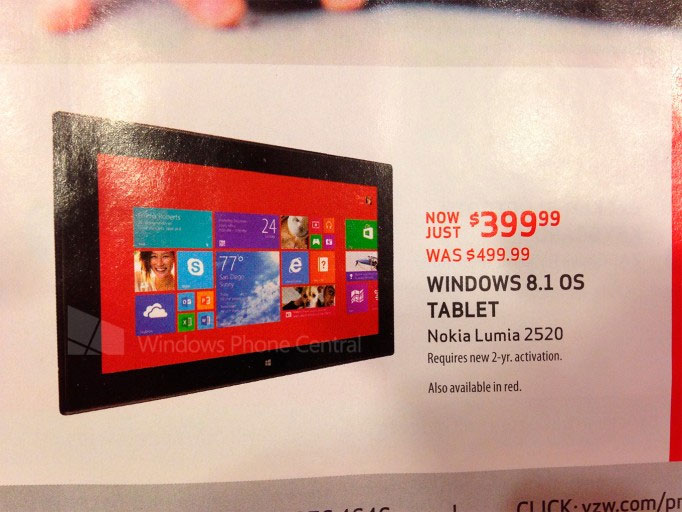