Livescribe 3 review rebuttal: the past meets the future

In our Livescribe 3 review, we look at the smartpen that is trying to bridge the gap between pen and paper and the digital age.
Published 02 April 2016, 10:21 EDT

Regardless of how much technology has advanced, nothing is as comfortable and familiar an input device as the pen and paper. It’s something we’ve been doing since we were kids and it feels so natural, it has never been adequately replaced. Microsoft, Apple, and a virtual cornucopia of other stylus manufacturers have tried to replicate this experience on mobile devices for years. Some have come close, but haven’t crossed that last hurdle. And yet, there remains a strong demand for the ability to write things down but still have them stored digitally for later review. This is the gap that the Livescribe 3 Smartpen is trying to close. We have been trying one out for a few weeks and here is what we found.

The philosophy behind the Livescribe 3 Smartpen is to take what you’ve been doing all your life, but combine it with the technology of today to fulfill the goal of the digital age. The build of the pen is large, like a high-quality pen. It’s not bulky, and its soft-touch grip is very comfortable to hold and to use. The tip of the pen is seated next to an infrared camera that we will discuss later. The middle of the pen rotates to open and retract the pen tip and also turn the pen itself on and off. An LED indicator on the clip of the pen indicates power, connection status, and the like. Finally, the end of the pen is a removable cap that covers the microUSB port for charging. The cap itself is also equipped with a rubber stylus tip, so you can use the back of the pen on your phone or tablet. 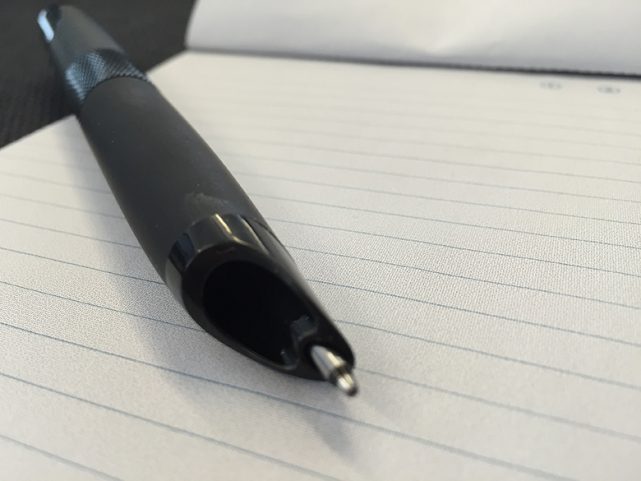 So, let’s talk about that camera. The infrared camera scans the paper on which the Livescribe 3 is writing. Livescribe paper is printed with tiny dots which tell the pen its location on the paper. What this means is, yes you do need to use a special kind of paper to use the Livescribe pen. The paper is readily available at office supply stores and online, and the price is comparable to normal paper. This is a small change in your work flow, so don’t panic, the pen won’t break you.

The magic happens when you pair the Livescribe with a phone or tablet. When you have the app open, anything you write on the paper gets transcribed digitally to the Livescribe app. The app sorts your notes into Notebooks and Feeds. Plus, handwriting recognition software allows you to search your notes. It even recognized our chicken-scratch handwriting, so you should be fine. What this means is that you can kick it old school and use pen and paper, but retain those notes you take digitally and securely in the app. 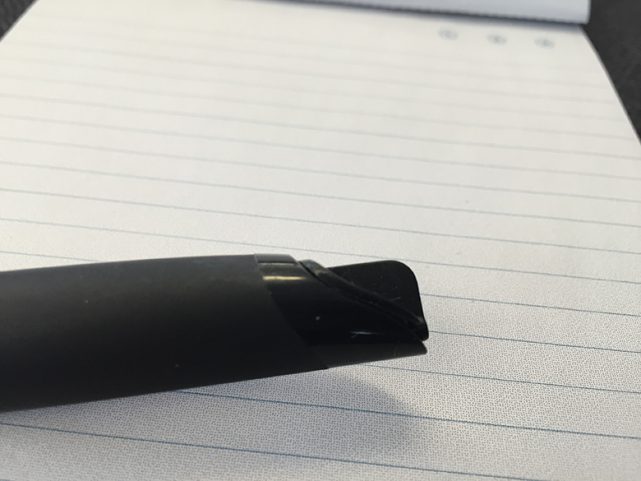 Plus, the Livescribe 3 offers even more, such as Pencasts. Pencasts are digital recordings of notes and audio. If you’re attending a lecture or a meeting, you can record audio and play back that audio with your notes so you can see the context of why you took a note when you did. This can be particularly valuable to ensure you don’t miss any points, or clarify what exactly you were thinking when you wrote, “Holy crow, Roy. That’s an amazing hamster!”
There are a couple of questions marks in the Livescribe’s design that we are not fond of. On both ends, removable caps expose other parts of the pen. On the pen tip side, is a rubber stopper which caps the pen and the camera. As mentioned before on the end of the pen is a stylus tip that is removed to reveal the charging port. We’re not fans of removable (read: easily lost) parts on any mobile device or accessory. The pen tip stopper also has an odd design going against it which actually makes it a bit of a challenge to put in properly. Neither of these are deal breakers, but they are sub-optimal design choices nonetheless.

The past and the future

Beyond that though, the benefit of this “best of both worlds” concept far outweighs any downside. Taking notes and having them digitized, indexed, and searchable is borderline ground breaking. Input, especially one-handed input is a problem that has yet to be solved. In the meantime, the Livescribe 3 SmartPen can bridge the gap between yesterday and tomorrow.

You can directly open the suggested webpage or even check out the full Google Search results page, all within the YouTube app.

It will also feature a headphone jack.