Lithium-sulfur promises to either double our battery capacity or cut their size in half! Either way it’s what battery technology desperately needs!
Published 26 September 2014, 10:06 EDT

Every time a new smartphone or tablet comes out we ache to see more cores, faster frequencies, better graphics, more RAM, and increased storage space. All this comes at a cost: run time. For years we’ve been asking for improvements in battery life to better meet the needs of our always-on, media-intensive lifestyles. Why can’t battery technology improve at the same pace as other electronics? If the science holds true, we might be poised to see such an advancement thanks to a special formulation of lithium and sulfur.

The batteries in our smartwatches have around 300 mAh capacity and our smartphone have a little more than 2,000 mAh. Neither are enough for us to stray too far from a charger for very long. That’s using lithium polymer (LiPo) batteries, which feature energy densities of around 150 to 200 W·h/kg. Lithium-sulfur batteries, on the other hand, have reached up to 500 W·h/kg. Put another way, lithium-sulfur can pack twice as much energy in the same space as LiPo.

Researchers at the Lawrence Berkeley National Laboratory have been working on an advanced lithium-sulfur (Li-S) cell that offers a compelling combination of energy storage, recharge speed, and survivability – all of which are necessary for any battery technology to be successful.

Most of the time we focus on how much power can be stuffed into a battery. That’s great, but you’ve also got to consider how much time a battery can hold its charge without “phantom discharging” – losing power without anything using it. Capacitors are famous for this sort of behavior, they charge up quickly, but they discharge almost as fast, even if you’re not “using” them in the traditional sense. 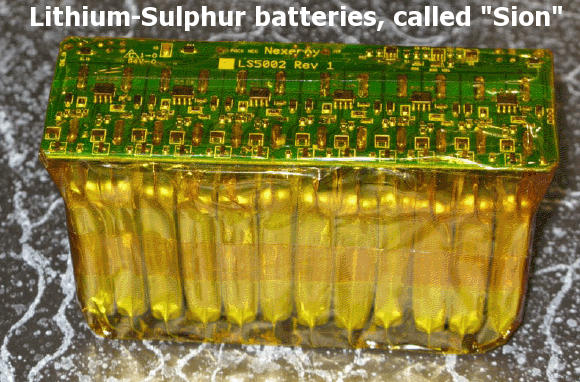 Lithium-sulfur batteries essentially double the power capacity over other lithium ion type batteries because two electrons are produced each time a molecule is processed through the lithium-sulfur technology.

Another factor to consider is recharge speed. A battery that takes a very long time to charge can be quite frustrating, so batteries that power our mobile devices need to be able to recharge relatively quickly.

Because lithium-sulfur deals with two electrons at a time, rather than just one, recharge times can theoretically be halved as well.

Sometimes called “durability”, survivability in a battery refers to how many times it can be charged and discharged before it loses its ability to store energy. Some battery technologies are better at this than others, and it’s a challenge that lithium-sulfur still has to overcome.

The first challenge for lithium-sulfur is the way that sulfur combines with lithium. When it does so, it forms several different compounds that crystallize and effectively “gum up” the battery’s insides. As you can imagine, this prevents energy from flowing, and a battery without energy flow isn’t very useful.

The second challenge for lithium-sulfur is a nasty tendency to crack due to the stress of repeated cycling. Initial lithium-sulfur batteries couldn’t survive much more than a few dozen charge/discharge cycles – far too few to be considered a viable alternative in our smartphones.

To address these issues scientists are working on various ways to construct cathodes to prevent them from cracking and to keep the lithium-sulfur compounds from crystallizing. The research is paying off. Charge/discharge cycles have reached into the 500s before the carrying capacity of the battery is halved.

Sure, lithium-sulfur still has a way to go, but hopefully we’ll start seeing sulfur in our batteries before too long!