A liquid cooled smartphone: an inevitable, and very smart move

Every processor on the planet creates heat. More precisely, computer chips convert electrical energy into thermal energy. Even the most simple circuit has some amount of resistance, and that resistance is manifest in heat. It’s the nature of the beast. Electronics don’t particularly like heat – in fact, a circuit that runs too hot will eventually burn itself out. That’s where the genius of a liquid cooled smartphone comes in to play. First, let’s lay some groundwork.y 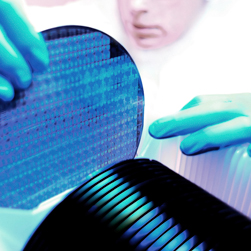 When designing computerized components, the challenge has been to create smaller circuitry that requires less power to accomplish the same tasks. This has been one of the driving factors behind what I’ll call “the nanometer push”. When you talk about computer chips, you’ve probably heard the term “nanometers” mentioned (or nm, for short). A nanometer is a unit of measurement that is 10–9 meter (or one billionth of a meter).

The Qualcomm Snapdragon 810, for example, is built on a process technology of 20nm. What that means, exactly, is a bit complicated, so for this article, suffice it to say that a process technology of 20nm is really small. Chips built on a smaller process size generally consume less power than an equivalent chip built on a larger process size. Less power consumption not only means longer run-times but also means less of that power is converted into heat.

The other reason manufacturers opt to “go small” is to fit more chips on a single silicon wafer, thereby reducing the costs of raw materials – but, since that doesn’t have anything to do with heat, we’ll leave it at that.

Never let them see you sweat

So far we’ve talked about how all circuits (no matter how basic) emit heat; to help make things run cooler, one leading strategy has been to reduce the process size used to fabricate integrated circuits; and that if chips run too hot, they burn themselves out. With me so far?

We’re going to skip mechanical ways to dissipate heat for the time being, and instead talk about how heat can be managed with software. I know, crazy!

Since chips run hottest when they’re under load, another means of managing their heat has been by dynamically scaling the speed at which the chip processes data. Sometimes this is done by under-volting (supplying less voltage to the chip), other times it’s done by reducing the clock-speed of the chip (from 2,000MHz to 300MHz, for example). Recently ARM has introduced us to the big.LITTLE technique, where the system hands off low-demand/low-complexity instructions to a set of more power-friendly cores, and high-end/high-power cores handle the work of high-demand/high-complexity instructions. Although this is designed to mitigate power consumption more than regulate thermal conditions, the cause and effect go hand-in-hand.

The faster your SoC runs, the hotter it gets. Eventually the system will need to slow down the chip to keep it from burning itself out. This thermal throttling isn’t all that popular, and illustrates one of the drawbacks of “going small” that we mentioned in the previous section: smaller chips have a smaller surface area over which to spread the heat that’s generated. Heat from the chips is now concentrated in one relatively small area. That one area can get super-hot – even with thermal throttling. 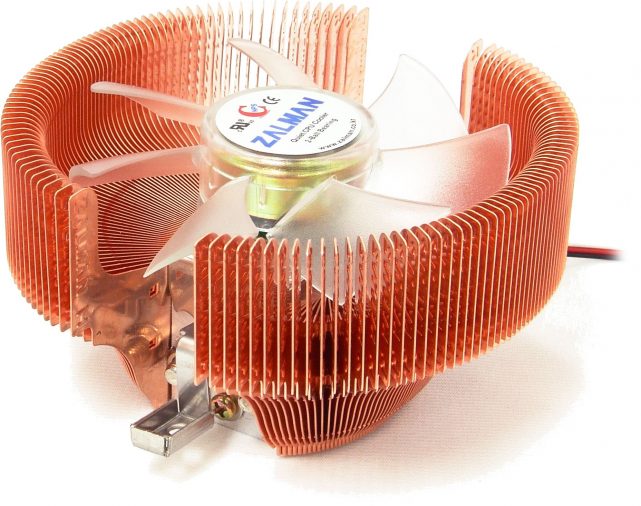 Okay, back to the mechanical ways to dissipate heat that we skipped over. The easiest way to pull heat off a chip is to slap a chunk of metal on it. Copper and aluminum do a fairly good job of absorbing heat from the chip and then exhausting that heat to the surrounding air.

These heat sinks typically have a solid base that’s married to the chip with a thermally conductive paste or glue, and have “fins” on the opposite side to maximize the surface area of the heat sink exposed to the air. You might need a big heatsink to dissipate a lot of heat, or even a fan to push air across those fins. Chances are the computer or laptop that you’re using has exactly that setup.

The downsides to heat sinks (or “HSFs”, in the indusry) are cost, weight, bulk, and the typical need for a fairly noisy fan. When inside a PC or server chassis, this might be an acceptable thing, but as we go smaller, traditional HSFs become less and less desirable. 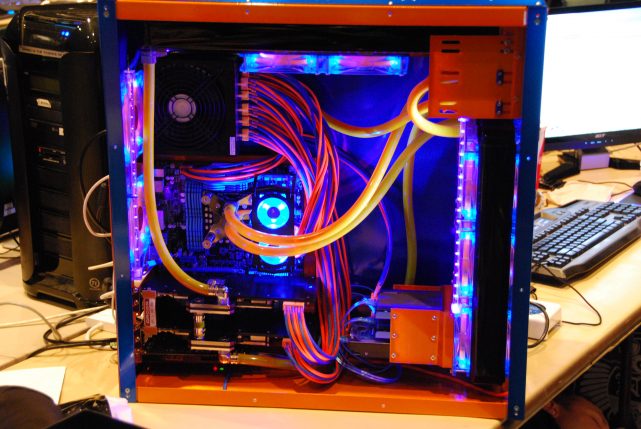 What’s even better at dissipating heat than air? Water! Don’t believe me? If you stand outside with an ambient temperature of 50° F (10° C) you’ll probably think it’s pretty chilly, but you could probably stay out there for hours without complication. Now, do the same thing submerged in a 50° F lake. Big difference, right? The latter is even life-threatening if you stay there too long. Why? Water does a much better job at carrying away heat than does air. That’s why gamers like to install water cooling rigs on their gaming computers.

In this configuration, “blocks” are attached to the CPU and GPU and hoses connect those blocks to a reservoir and pump. Some people even liquid-cool their RAM and hard disks. In this configuration, heat is pulled off the chips and transferred to the water. The water (and some proprietary chemicals to help it flow better and to keep it from building up static electricity) circulates through a radiator that has a fan blowing across it to dump the heat from the water into the air. The advantages to this setup are space savings at the point where the heat is generated, better efficiency of dissipating the heat, and a significantly quieter system. Not to mention the coolness factor of having a liquid cooled rig, amirite?!

That’s not the sort of “liquid cooling” we’re talking about here, although the concepts are the same.

Liquid cooling keeps the thermal “block” but replaces the flexible tubes filled with water with rigid copper pipes filled with a special “substance” that can flow freely through the sealed pipe. This technology is most often referred to as a “heat pipe”. 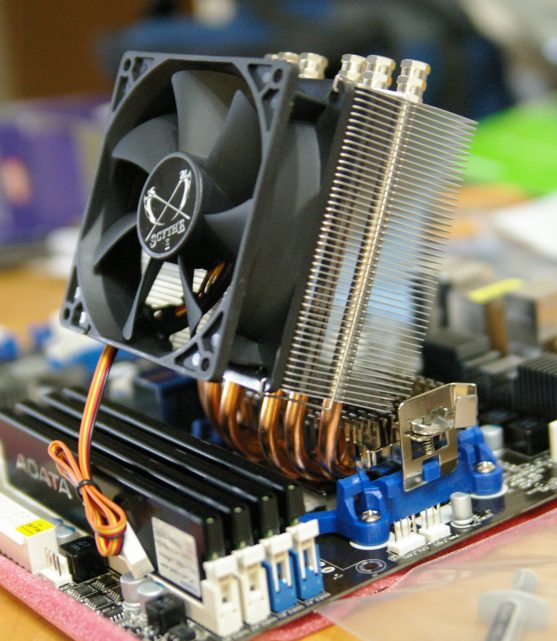 The basic concept is that the substance in the heat pipe is a liquid at ambient temperatures, but is vaporized by the intense heat of a modern SoC (or GPU for that matter, but more on that in a bit). The vapor then travels to the cool end of the heat pipe where the heat is dissipated, returning the vapor to liquid, which then returns to repeat the process all over again. Unlike water cooling systems, heat pipes don’t require a pump to circulate the liquid.

Heat pipes are nothing new. The video card in your computer probably already has at least a couple heat pipes on it, and if you’re using a laptop computer, its CPU probably has a heat pipe system installed to carry heat from the chip to the fan. What is new is the use of a heat pipe in a smartphone – or is it?

Earlier today, Microsoft showed off the new Lumia 950XL, which runs Windows 10 Phone and uses a heat pipe to carry heat from the SoC to its magnesium chassis, where it’s dissipated. Some were quick to demonize Microsoft for making a phone that needs to be liquid cooled. Others jumped on the “Snapdragon 810 runs too hot” bandwagon. If that’s you, you’re missing the point.

Computers and graphics cards already employ this technology. Laptops and tablets already employ this technology. Now we have a phone that can do the things that a tablet, laptop, and even desktop computer can do, and they’re arguing that the same technology used to cool those systems is somehow “inappropriate” when the device doing all that is in an even smaller package? Not only that, Microsoft isn’t alone here, Sony’s Xperia Z5 has a pair of heat pipes tucked neatly inside its shell, and we’re sure other phones have employed heat pipe technology at various points in the past.

@zpower No way dude! It’s efficient and it gets you PERFORMANCE. It doesn’t take power, it doesn’t add weight.

Based on our hands-on experience with the Lumia 950XL, this liquid cooling system does not seem to add any significant mass to the phone – it is light and thin as ever. And thanks to its liquid cooled heat pipe system, this phone will probably run cooler and faster than any other smartphone in its class. Well done, Microsoft. Well done.

Apple’s flagship shines with its camera prowess. Protect it by picking one from this list of the best iPhone 12 Pro Max camera lens protectors.

Today, OnePlus has announced its latest and one of most affordable devices,…