The LG V50 ThinQ 5G is LG’s first 5G smartphone. It will come to Sprint in the US, but without the dual display cover available elsewhere.
Published 24 February 2019, 13:45 EST

The LG G8 ThinQ and the G8s are not the only phones the Korean company brought to MWC 2019. It is for the first time that LG is launching a new G and V model at the same time. The LG V50 ThinQ 5G, as its name implies, is LG’s first 5G-capable smartphone, with speeds up to20 times the speed of 4G. Being a 5G phone, it is all about content consumption and multimedia, and LG focused on boosting the display and audio performance of the device.

That starts with the 6.4-inch OLED FullVision display with 19.5:9 aspect ratio and QHD+ resolution. In the audio department, DTS:X enables surround sound for an immersive experience, in addition to Qualcomm aptX and aptX HD support. The cameras are also improved, with a trio of 16MP Wide (F1.9 / 1.0μm / 107 degrees), 12MP Standard (F1.5 / 1.4μm / 78 degrees), and 12MP Telephoto (F2.4 / 1.0μm / 47 degrees) shooters. Just like on the LG G8 ThinQ, the V50 ThinQ 5G is capable of Potrait Video, which is basically applying bokeh effects and depth of field to videos too, not only stills.

The phone is powered by the Snapdragon 855 chip, and has 6GB of RAM, and 128GB of expandable storage. Because it’s a 5G phone, power consumption and heat generated by high speeds pose real challenges. The V50 ThinQ 5G packs a 4,000mAh battery, “and a new Vapor Chamber heat-dissi- pation system which is more effective than conventional heat pipes at keeping internal tem- peratures low – even when multitasking“. 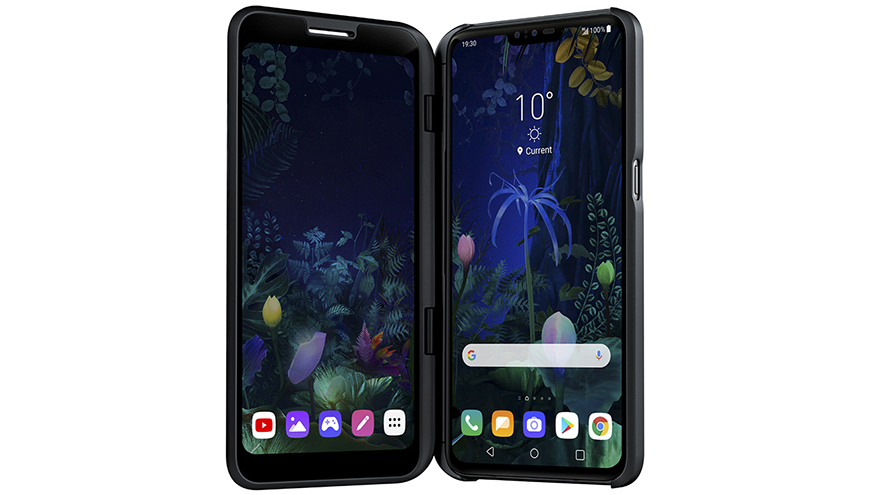 You’re not going to see this next part in the U.S.: LG is taking a different approach to foldable smartphones, as it has prepared a dual-screen accessory for the V50 ThinQ. It’s basically a cover case that features a 6.2-inch OLED display that can be turned on or off on demand to save power. It has FHD+ resolution at 2160 x 1080 pixels, and runs off of the main phone’s battery. When the case is flipped open, the phone offers a dual display experience for multimedia and multitasking.

While we know the LG V50 ThinQ 5G will be Sprint’s choice for a 5G smartphone, details about pricing and availability, both for the U.S. and globally, are not yet available.

ENGLEWOOD CLIFFS, N.J., Feb. 24, 2019 — LG Electronics (LG) has captured the imaginations of consumers the world over at Mobile World Congress 2019 with the simultaneous unveiling of its newest G and V series flagship smartphones. At the Center de Convencions Internacional de Barcelona (CCIB) in Barcelona, LG introduced the new LG G8 ThinQ, alongside its first 5G phone, LG V50 ThinQ 5G for a double dose of excitement.

The Perfect Smartphone for the 5G Generation

LG has gone all out to boost the display and audio performance of LG V50 ThinQ 5G so consumers can enjoy more immersive content as they watch more and play more on 5G. A 6.4-inch QHD+ OLED FullVision Display with 19.5:9 aspect ratio offers users a heightened sense of immersion whether they’re viewing a video or enjoying a game. Plus, with DTS:X technology onboard, LG V50 ThinQ 5G provides a surround sound experience that enhances the content quality to create a realistic soundscape with suburb clarity and depth.

LG’s 5G smartphone features optical innovations that enable users to take extraordinary pictures and videos of the highest quality. Looking beyond still images, LG implemented Portrait Video in both the front and rear cameras, building on video bokeh effect found on the rear camera of the LG G8 ThinQ.

LG’s first 5G device is powered by the newest Qualcomm® Snapdragon 855 Mobile Platform, and LG’s optimized software delivers the advanced processing power required for 5G. The phone is also equipped with a 4,000mAh battery and a new Vapor Chamber heat-dissipation system which is more effective than conventional heat pipes at keeping internal temperatures low – even when multitasking.

Inheriting the V series’ thin, stylish design, the LG V50 ThinQ 5G is just 8.3 millimeters thin and weighs only 183 grams. To maintain its sleek profile with uninterrupted lines, the rear lens housing is completely flush with the back of the phone. This engineering is achieved without sacrificing durability as LG V50 ThinQ is compliant with U.S. military MIL-STD 810G standards.

MWC 2018 attendees are encouraged to visit LG’s booth in Hall 3 of Fira Gran Via from February 25-28 for more information on LG’s newest smartphones as well as other exciting mobile innovations.