The LG Rolly Keyboard is a compact, portable, and very functional bluetooth keyboard that makes it possible to leave our laptops at home.

One of the biggest obstacles to actually getting things done on a tablet is a lack of a keyboard. Sure the software keyboard is large enough you can actually get pretty good at banging things out, but for many of us, nothing beats the feel of a physical keyboard for tablet computing. This is why the Surface Pro is sold with a keyboard. This is why the iPad Pro is sold with a keyboard. But sometimes, you don’t want a keyboard, or it adds unnecessary bulk to your bag – not good for anyone. Enter the LG Rolly keyboard.

The Rolly keyboard is exactly what it sounds like: it’s a keyboard that rolls up. This is not a brand new concept, not by any stretch of the imagination. But the Rolly hits quite a few high points (along with a few inevitable lows) in its quest to solve the tablet/keyboard problem.

The Rolly keyboard does indeed roll up into a long rectangular prism – which is the correct mathematical term for it, by the way. We just call it a rectangular wand. Unrolled, the Rolly has four rows of keys flanked by magnets on either end (which keep the Rolly rolled). A function button serves the purpose of adding numbers and other functionality to the Rolly, but essentially you have a full QWERTY keyboard, minus the number row.

The middle of the unit (which becomes the top once unrolled) holds the single AAA battery that powers it, plus two plastic legs into which you can insert a tablet – even one as large as an iPad 4. The Rolly connects to your tablet via Bluetooth, and typing is swift and responsive. It turns on when the keyboard is unrolled and turns off when it is rolled up again or after an idle timeout. 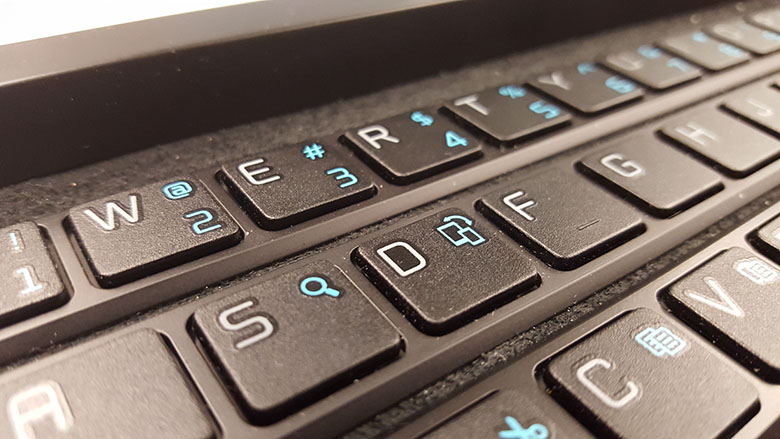 The Rolly is quite comfortable to use. Indeed, eight editorials and this review were all written on the Rolly paired with a Nexus 9. Prior to this, the Bluetooth keyboard with which we had the most experience was the HP TouchPad keyboard (which is also great, by the way). We found it relatively easy to adapt to the layout of the Rolly, though we never quite figured out the apostrophe, which required a “FN” + “;” combination. We kept pressing enter instead. But that’s what autocorrect is for, right?

Lending to that comfort is the key pitch on this keyboard. Key pitch is the distance between the center of each key. In the case of the Rolly, the key pitch is 17mm, which according to LG is not far off from most desktop keyboards – 18mm. What a millimeter or two between friends, right? This key pitch is exactly what makes the LG Rolly so comfortable to use. It is not cramped, which is just how we like it.

Overall, we had very few complaints about the hardware itself. The keys feel solid and responsive with great travel. They are clearly labeled, especially the function keys. There’s very little searching involved when trying to find a function character. It’s laid out in a very intuitive way. 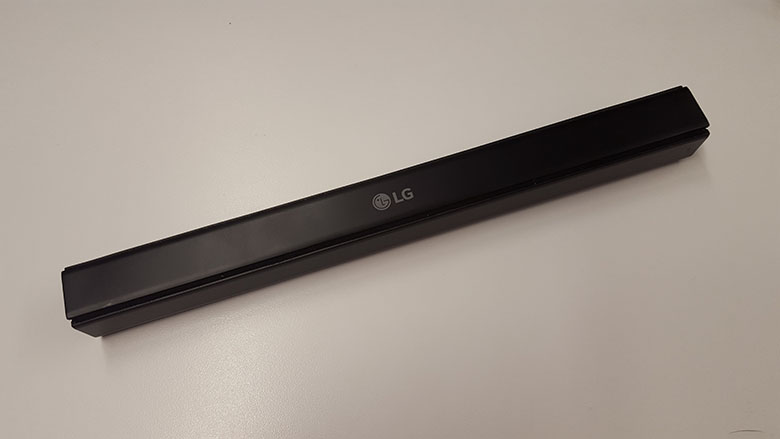 One benefit that we loved about the Rolly stands out above the others: suddenly, we could leave our laptop at home. If we were on our way out and wanted to write a quick editorial while out, all we had to do was grab the Nexus 9 and the Rolly and our Macbook Air could stay home. This was a really nice thing for us, since we take our laptop almost everywhere. Having the freedom to leave that at home and just toss the Rolly in our bag was invaluable while out and about.

Of course, the nature of the Rolly is that you pretty much can’t type with this device unless you have a table. The Rolly simply isn’t designed to work on a lap, or really anywhere but a hard flat surface.

The keyboard is designed to hold a tablet along with it. It can be used in conjunction with a tablet that is standing up on its own, like with a case for example. But doing so makes this keyboard a little cumbersome to use because the weight of the tablet helps hold the keyboard in place. Four rubber feet are placed along the length on the Rolly which grip the surface upon which you are typing to keep it from moving all over the place. The weight of the Rolly itself is insufficient to keep the keyboard in place. This really becomes a major pain when you want to type but also want to leave your tablet in the case. LG lost some design points on that count. 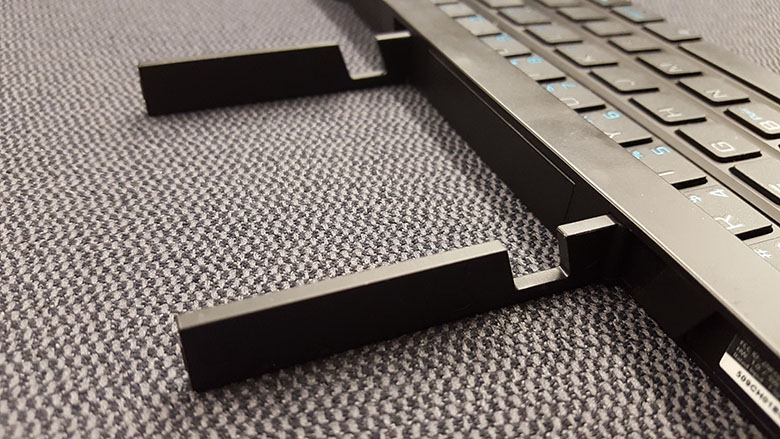 Also, the legs that extend to hold a tablet up have a cheap plastic feel, rather than a premium feel that you’d expect from a keyboard like this. Much of the rest of the keyboard is also plastic, but you don’t get that same cheap impression you get from those legs, especially for the price. And, speaking of …

We’d have expected a device like the LG Rolly to retail for somewhere in the fifty to seventy dollar range. But the Rolly’s actual price of $110 seems awfully high for an accessory which isn’t technically needed for a tablet to work. Then again, Apple and Microsoft are selling their tablet keyboards for $150, so why not, right? Still, that doesn’t mean it’s cheap. Honestly, in our humble opinion, any keyboard priced in the triple digits is priced too high.

The bottom line here is LG made a really slick and really compact keyboard that, when paired with a tablet can virtually replace a laptop as a writing machine – that is saying a lot. The price is on the steep side, but if you have some holiday gift cards to spend, and you often find yourself frustrated by having to grab your laptop, while wishing that your tablet could do the job, then this is a great keyboard to own.