NTT DoCoMo has confirmed the LG Optimus G Pro though the manufacturer hasn’t unveiled anything officially yet. Check out the details!
Published 22 January 2013, 03:24 EST

A Japanese forum was the place for the latest LG Optimus G Pro leak and Japan is the country from where we get more details about the device. Apparently carrier NTT DoCoMo, as part of its 2013 line-up unveiling event, has confirmed the phone, alongside some specs and the renders above and below.

The LG Optimus G Pro packs a faster, 1.7GHz Snapdragon S4 Pro SoC, five-inch Full HD screen, 2GB of RAM, 32GB of Internal Storage expandable via microSD slot, 13-megapixel main shooter, 3,000mAh battery and Android 4.1 Jelly Bean out of the box. LTE functionality is also present and those in Japan who want to grab this device will have to wait until Q2 (April). Since there is no official word from LG yet regarding the phone (maybe coming at MWC), we don’t have any information regarding availability in other regions. 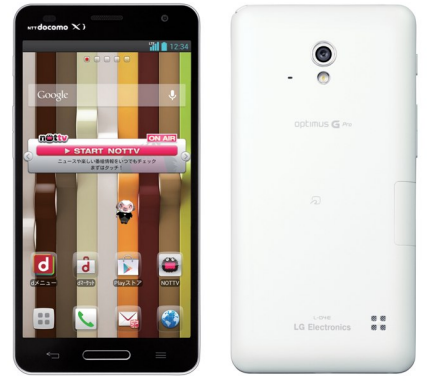 Conferencing app Zoom was having some issues this morning, and it may have helped Google Meet get more users as a safer and more reliable alternative
YouTube 1.8M
Facebook 569K
Twitter 196K
Instagram 133K
RSS