With competition that includes Samsung’s Galaxy S III and HTC’s One X, LG is fighting an uphill battle with their newest smartphone. LG all but snuck into the high-end race with their the Optimus 4X HD. Its specs are impressive, but how does it stack up when put through real-world tests? Keep reading and we’ll let you know if this quad-core, HD smartphone can give Samsung and HTC a run for their money.

The LG 4X HD is a powerhouse by every definition of the term. In case it wasn’t clear enough, the “4X” means it’s got a quad-core CPU in it, the “HD” means it’s got an HD display. The CPU is an Nvidia Tegra 3 Cortex-A9 clocked at 1.5GHz with ULP GeForce video powering a 4.7-inch Type True HD-IPS LCD capacitive touchscreen, with 16M colors, and 720 by 1280 pixels (giving it a pixel density of ≈312), all tucked neatly behind a flat sheet of super-strong Corning Gorilla Glass. If that screen isn’t big enough for you don’t worry, the microUSB port doubles as an MHL HDMI port, and it’s got DNLA built-in.

When it comes to RAM, you’ve got 1GB. Internal storage is 16GB, and you’ve got an empty microSD slot ready to accept up to an additional 32GB of storage should you need it. Wireless is plentiful as well, with radios capable of 21 Mbps HSDPA (down) and 5.76 HSUPA (up), Wi-Fi is dual-band, covers 802.11 a/b/g/n, and includes DLNA, Wi-Fi Direct, and Wi-Fi hotspot.

Something uncommon to most smartphones today is Bluetooth v4.0, this phone’s got it, so not only is the Optimus ready for your current Bluetooth accessories, it can handle the new, low-power profiles that we’re slowly starting to see. No modern smartphone would be complete without NFC. Unlike Samsung, that puts the antenna for the NFC chip in their batteries, LG put their antenna in the the back cover, and they threw in a couple NFC tags for you to get started playing around with some of the cool things you can do with NFC. The battery is Li-Ion with 2150 mAh of power, which in our tests was plenty enough to get you through an entire day with normal use, and easily lasted the day and through the night with light use. 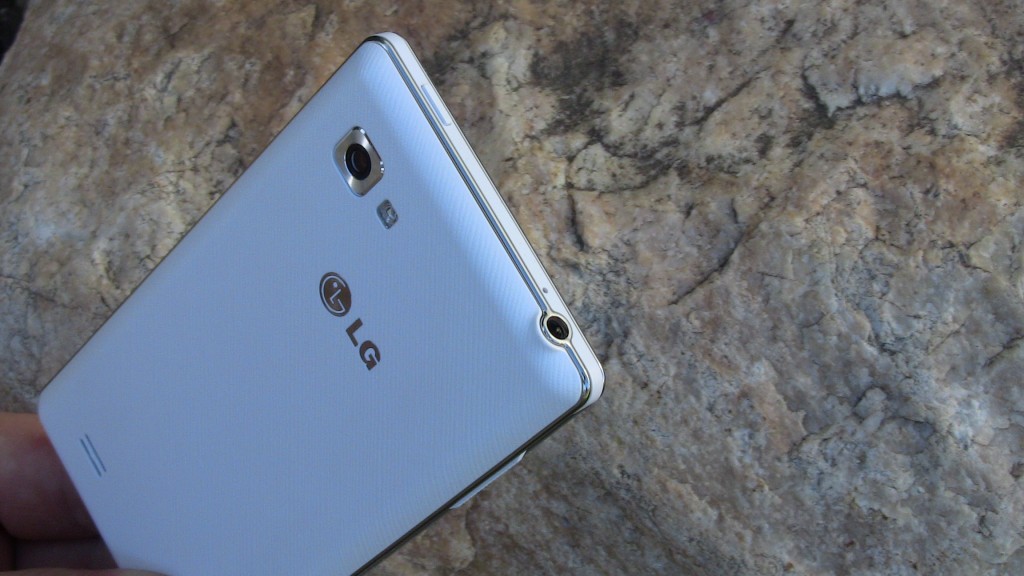 At the top is the noise-cancelling microphone, 3.55mm headset/headphone hack, and an HTC-style power button. 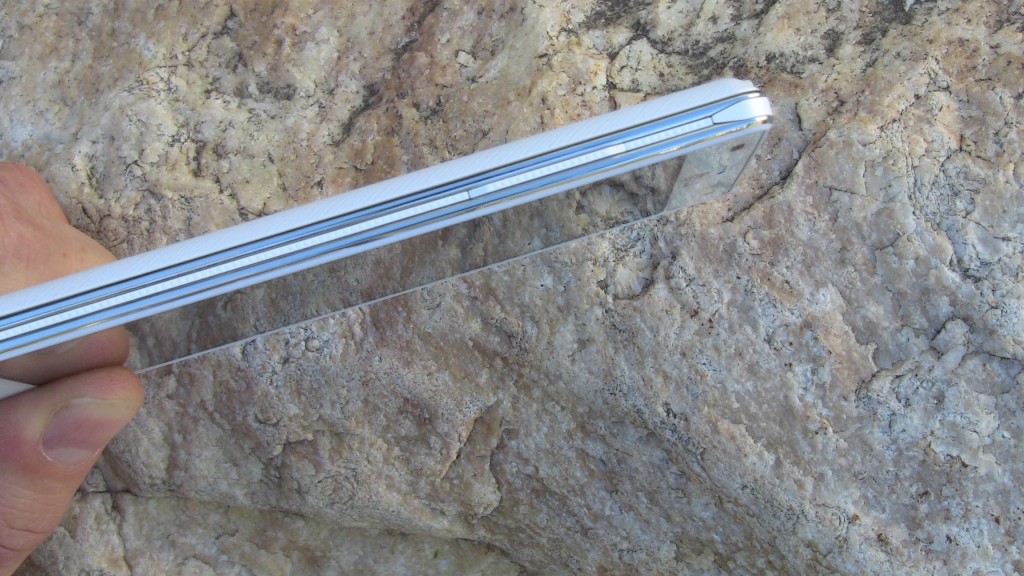 On the left-side you’ll find the almost invisible volume rocker nestled inside the double-chrome band that runs around the entire phone. This feature creates a recessed area that helps tremendously with gripping the phone. 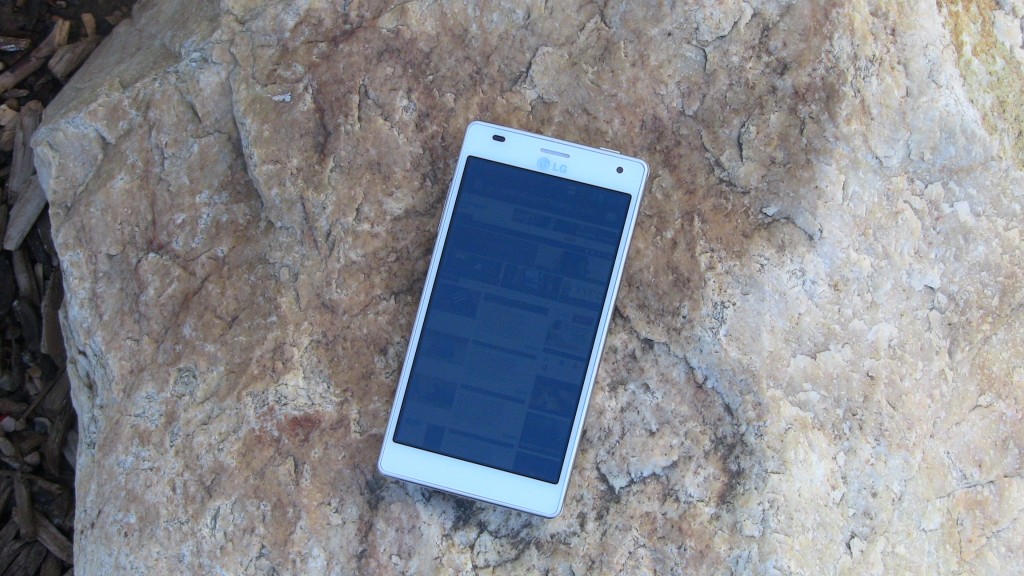 The front of the phone features some very subtle LG branding, a few sensors, the speaker, and front-facing camera. The HD screen takes center-stage, and three back-lit, capacitive buttons occupy the space beneath the screen. This reminds us of the old Samsung Galaxy phones with their “invisible buttons” that you couldn’t see until after you’d pressed them. Apparently LG didn’t get the memo. Luckily, they did include a setting that lets you turn on the front key light and set it to “always on” when the screen is on. Unfortunately, that’s now how it’s set by default.

The screen itself is an IPS LCD RGB display (as compared the the Super LCD2 on the HTC One X). Both screens are very high quality and present colors very well, though colors on the Optimus are a bit more “neutral” and less “warm” than those on the One X. We weren’t able to discern any objectionable pixelation during day to day use, and it’s bright enough to use comfortably outdoors. 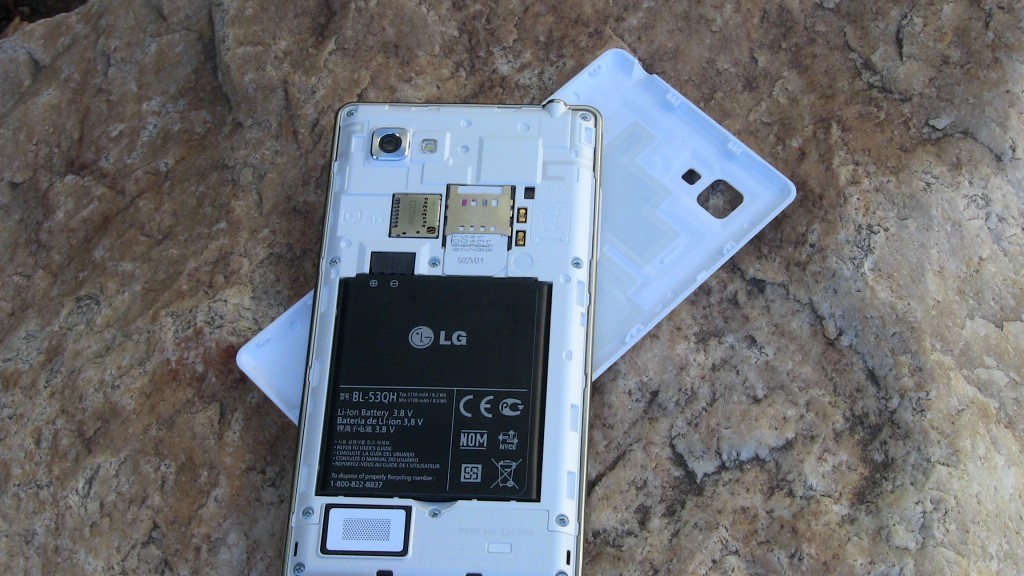 The back of the phone holds the 8MP camera and LED flash (more on that later), and the main speaker. The back panel itself is textured and helps you keep a firm hold on the phone. Inside the back cover you’ll find the NFC antenna, which is a bit unusual since we’re used to most NFC antennae being built into the battery. At the top you’ve got your standard-sized GSM SIM and microSD slot. 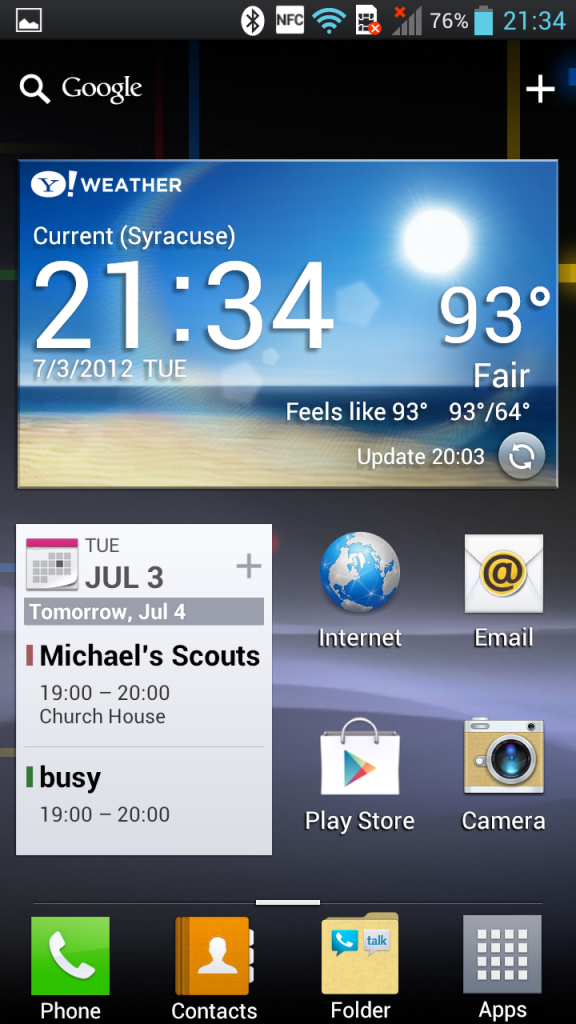 Although the Optimus comes with Android Ice Cream Sandwich 4.0.3, the user interface is LG’s own Optimus UI v3.0 which looks very similar to Samsung’s TouchWiz UI and is much more colorful than stock ICS. 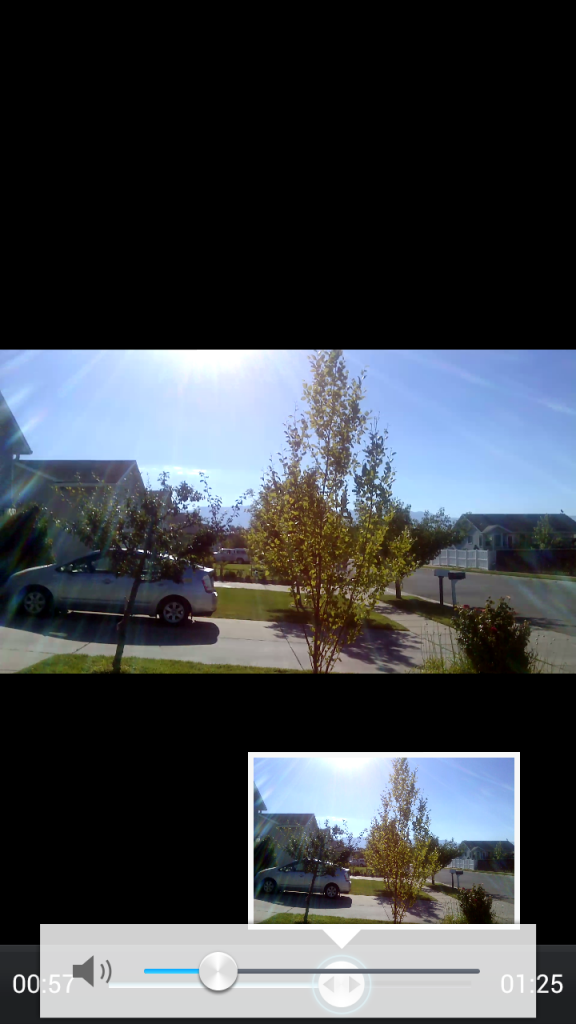 Video playback is where the “HD” in the Optimus 4X HD  really shines! With out-of-the box support for DivX/Xvid and MKV video files with a resolution up to 1080P, the results are nothing short of astounding — as long as your video source supports higher resolutions (don’t expect titles from Netflix to be as pretty as local, HD video files).

The video goodies don’t stop with the screen and codecs. The player includes new Media Plex features that let you zoom in the video, a functional fast-forward slider with frame previews, and more. Video playback is with the Optimus 4X HD was designed for, and it does very, very well.

The 2150 mAh isn’t the biggest battery, but it’s better than many. The battery is big enough to get you through your day without worries. I was able to get almost two light-use days out of one charge which surprised me. As soon as you fire up video, however, your battery life drops dramatically. Playing videos or video intensive games will cut your battery down to around 5 hours. It’s worth noting that LG is using a new SiO+ battery technology, rather than the standard Li-Ion tech that we’ve seen in most other phones. It’s still a Li-Ion technology, but SiO+ allows more lithium ions to be stored in a smaller space, resulting in a smaller battery, or longer runtime, however you’d like to look at it. In standby, devices based on the Tegra 3 aren’t as frugal with your battery as Snapdragons are, so the extra juice helps.

While we’re talking about batteries, unlike Samsung, LG opted to put their NFC antenna in the back-cover, not in the battery. Both locations seem to work equally well.

The rear-facing camera is an 8 MP shooter with autofocus and LED flash. Still shots were fair, though a bit saturated and with a more lens-flair that we’ve come to accept in most phones.

The video recording capability of the Optimus comes set at 720P, though it’s capable of 1080P. We ran it through our regular test, paying attention to close-ups, detail, and color contrast. What we saw wasn’t great. The autofocus on the camera is hyperactive causing blurring every few seconds as the camera tried to re-focus over and over. Comments on the YouTube video were brutal with many thinking this was caused by a dirty lens. Rest assured, we cleaned the lens very well before shooting. Other reviews have mentioned “blurring” every few seconds when filming video on the Optimus, ours was more pronounced, we think, because we had more macro shots. Hopefully this is something that will be addressed and fixed in a software/firmware update. In the meantime, don’t record video too close-up.

The front-facing camera is 1.3 MP and works great with Android’s Face Unlock and video calling.

Overall, the phone is snappy with hardly any notable lag. Honestly, if you want to find any lag you’re going to have to be specifically looking for it. Ironically, however, the Optimus doesn’t blow you away with its speed, but it’s quick where it needs to be. Browser performance is very good, but again, it’s not terribly noteworthy, it just works and doesn’t leave much room to complain.

The Optimus comes pre-loaded with Ice Cream Sandwich, so it’s no where near as “buttery smooth” as the Galaxy Nexus is when running Jelly Bean. That’s not really a fair comparison, but after having used Jelly Bean for a little while, any phone not running it doesn’t seem as fast. As far as phones running Ice Cream Sandwich, however, the Optimus probably quicker than most, and on-par with the high-end devices that we’ve seen recently.

Here’s a look at how the Optimus did in the benchmarks, as compared with HTC’s One X which also has a Tegra 3 quad-core CPU (and scores are mentioned in parenthesis), and the international version of the Samsung Galaxy SIII {with scores noted in braces}.

With a removable battery and a microSD slot, the Optimus has some obvious advantages over high-end phones from other manufacturers. If you want a fast smartphone geared toward high-definition video (watching, not shooting), the LG Optimus 4X HD should be considered near the very top of your list.

It’s light-weight, high-powered, has a big enough battery to get you through your day, and runs Android Ice Cream Sandwich out of the box. This isn’t a low-end or budget phone, and the price-tag reflects that. 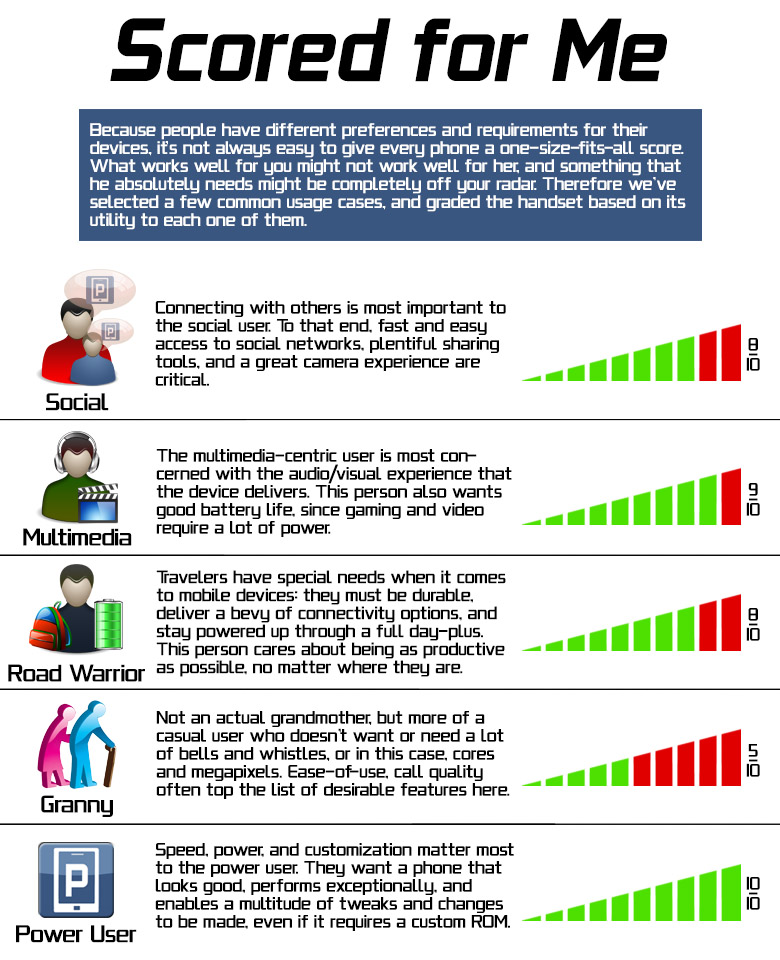