Thanks to a careless, premature Amazon India listing, we’re one step closer from having the full picture on the specifications of the LG Nexus 5X.

Google may have serious trouble getting anyone the least bit caught up with the news interested in its “big” September 29 Nexus introductory event, as everything from market names to designs, storage options, paint jobs, general specifications, and release dates has come to light of late via various rock-solid inside sources.

We even know a wholly redesigned Chromecast will probably join the LG N5X and Huawei N6P on the San Francisco stage, and a second-gen Nexus Player might be on the menu also.

But in case you’re not yet convinced the smaller of the two new vanilla Android phones shall fall below the flagship mark in both features and prices, Amazon India prematurely lists the Nexus 5X, aka LG-H791, with a thorough inventory of specs.

Power users, now would be a good time to look away, maybe refresh your memory as to what we expect and hope to see the Nexus 6P bring to the table. We’re afraid the 5.2-inch 2015 LG Nexus is decidedly mid-range, with a Full HD display on offer, as well as a hexa-core Snapdragon 808 chip, 2GB RAM, 12.3 and 5MP cameras, 16GB internal storage space, and 2,700 mAh battery. 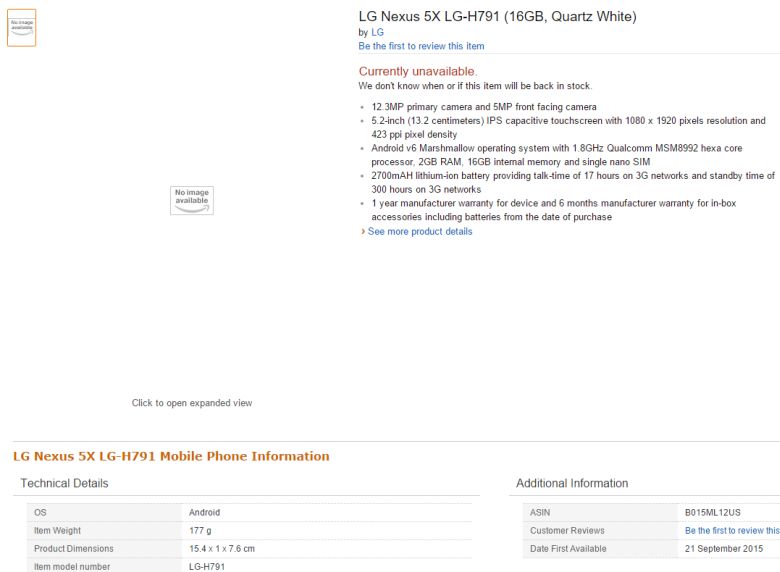 Given there’s no chance in hell Google will reconsider its stance on microSD support, a more hoarder-friendly 32GB configuration is a given. Still, it pains us to see this Marshmallow soldier match the RAM count of the two year-old original N5, and barely enhance cell capacity by 400 mAh, allegedly providing 17 hours of continuous talk time, and a 300-hour standby autonomy.

Another vexing detail is the item weight, listed at 175 or 177 grams, which would be a whopping 45 grams or so north of the first-gen Nexus 5. Obligatory camera hump bulk hike, or innocent typo on Amazon’s end? We’re less than a week away from knowing the full, official story, including the retail cost nitty-gritty.