Some of the LG G8 rumors and leaks we’ve been hearing recently were spot on, while others were a bit off. No need to wonder any more, as the LG G8 ThinQ has now officially been introduced at MWC 2019. The Korean manufacturer emphasizes on advanced optics and audio capabilities for the phone, making this obviously geared towards multimedia consumption.

There are three innovations on the LG G8 ThinQ. First is the Crystal Sound OLED, which LG officially confirmed prior to the show, but not before the leaks and rumors suggested it. The technology uses the smartphone’s display as a speaker diaphragm. Basically, the screen is emitting sounds, eliminating the need for a front speaker.

The second innovation is what LG is calling Hand ID. The advanced palm vein authentication is possible thanks to the Z Camera, backed up by ToF technology. The system is basically looking for, and identifying users based on the shape, thickness and other individual characteristics of the veins in the palms. Unlocking the phone is possible simply by placing the hand in front of the front-facer. Together with the Fingerprint Scanner and Face unlock (ToF), the Hand ID makes the LG G8 ThinQ the phone with the most security options at the moment. 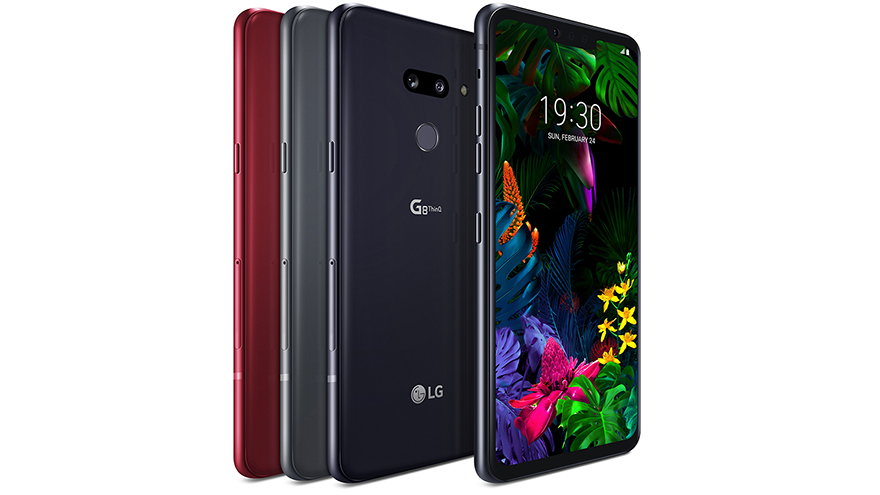 The Z Camera enables Air Motion gesture control, for the third innovation on the phone. Waving your hand in front of the phone allows the user to accomplish easy tasks, like changing the volume or switching apps.

Under the hood the LG G8 ThinQ is powered by the Snapdragon 855 chip, paired with 6GB of RAM, and 128GB of storage that’s expandable. The display is a 6.1-inch OLED panel with 19.5:9 aspect ratio and QHD+ resolution at 3120 x 1440 pixels and 564ppi. It also emits sounds, together with the Boombox Speaker (LG introduced on the G7 ThinQ) which turns the entire phone’s housing into a resonance chamber.

The LG G8 ThinQ will be available “in the coming weeks” in the U.S., but exact pricing and availability details will be announced by carriers and retailers. Color options include Carmine Red, New Aurora Black, and New Platinum Gray.

ENGLEWOOD CLIFFS, N.J., Feb. 24, 2019 — LG Electronics (LG) has captured the imaginations of consumers the world over at Mobile World Congress 2019 with the simultaneous unveiling of its newest G and V series flagship smartphones. At the Center de Convencions Internacional de Barcelona (CCIB) in Barcelona, LG introduced the new LG G8 ThinQ, alongside its first 5G phone, LG V50 ThinQ 5G for a double dose of excitement.

LG G8 ThinQ carries the tradition of offering consumers worldwide a palette of convenience-enhancing features with a focus on delivering advanced optics and audio capabilities. What’s more, the subtle, understated design philosophy that discards all nonessential design elements gives the LG G8 ThinQ an undeniably stylish appearance. Flawless aesthetics are not limited to the front of the device as its zero-protrusion rear camera creates a satisfyingly smooth surface. Crystal Sound OLED, an audio advancement that uses the smartphone’s display as a speaker diaphragm, eliminates the need for a front speaker, adding to the minimalist aesthetic.

LG G8 ThinQ is the world’s first smartphone with advanced palm vein authentication, made possible by the combination of the Z Camera backed up by ToF technology. LG’s Hand ID identifies owners by recognizing the shape, thickness and other individual characteristics of the veins in the palms of their hands. Simply placing a pre-registered hand in front of the front-facing camera for a split second is all it takes to unlock the LG G8 ThinQ and all its content. Since ToF technology in LG’s Z Camera sees objects in 3D and is not affected by ambient light, accuracy is unaffected by light from external sources. Further, Face Unlock cannot be fooled by two dimensional images of a face as photographs have no depth. With multiple forms of biometric authentication, LG is delivering more options for smartphone security than any other manufacturer, allowing consumers to choose which option is most convenient for them.

The Z Camera is also implemented to advance the user experience with Air Motion gesture recognition. Without ever touching the phone – useful in scenarios like cooking or cleaning – users can answer or end calls, take screenshots, switch between applications or adjust the volume. Controlling the LG G8 ThinQ is as simple as waving a hand or swiping the air, adding convenience to consumers who are increasingly doing more at home and on-the-go.

Video Portrait makes its debut on the LG G8 ThinQ, giving users control of bokeh while filming video in Portrait Mode with the rear camera. By analyzing distance and depth with Dual FOV technology, users can capture exactly what they see making it possible to produce videos that look incredibly polished and professional.

Beyond optics, LG G8 ThinQ excels when it comes to multimedia performance as the first G series device from LG to feature OLED display technology. The large QHD+ FullVision Display measures 6.1-inches with 564 pixels per inch, allowing for an incredible amount of detail, while the AI display engine optimizes color and brightness for different environments, helping to reduce eye fatigue.

The LG G8 ThinQ will be available in the coming weeks in the United States. Pricing and availability will be announced by major carriers and national retailers. For more information, please visit www.lg.com/us/mobile-phones/g8-thinq.

Google Pixel 6 Pro might feature up to 12GB of RAM.