So factor in your most common complaints with smartphones today. Your phone is either too big or slippery for regular sized hands, or some companies ignore design efficiency with large bezels, or my least favorite, which is a beautiful phone that doesn’t sport software optimized to make it feel that way.

This is one of the main reasons why I’ve spent nearly half a decade carrying two phones. The small one has always been my communicator, since large phones can be uncomfortable to handle in one hand, and the large one is my media powerhouse, since consuming content is best on a large display. I can’t say this is the best solution, but you end up getting used to it.

Now, what if a company decided to offer just one product that could serve both needs? A device small enough to be used in one hand, but also large enough to be comfortable for media consumption? We’ve dreamed about the ideal of bezels taking a step back in order for displays to get larger on regular smartphones, but the Sharp Aquos didn’t really find a massive launch in 2015, and then the Xiaomi Mi Mix that we saw in 2016 still remains a concept. It seems that 2017 is the year for this to actually happen, and LG has begun the trend with its new G6.

Is it really bold enough to be the only smartphone you need? Read on for our full LG G6 review below to find out. 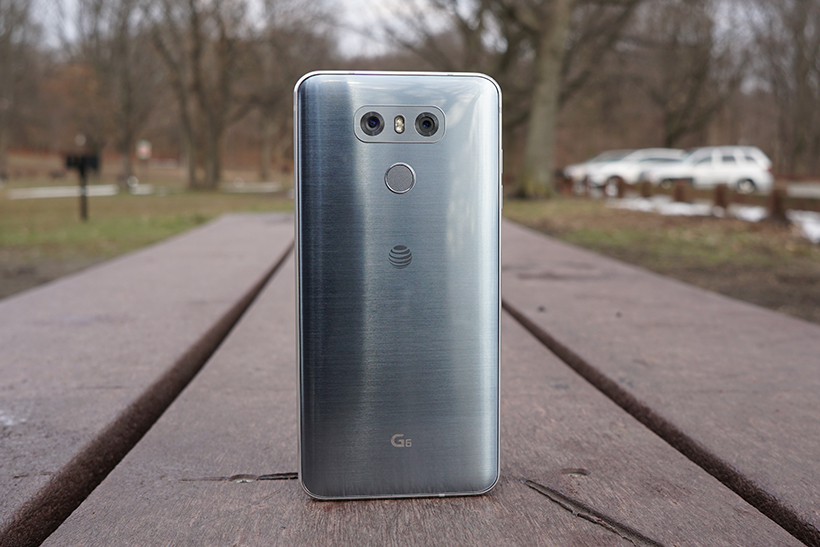 To describe the LG G6 in a word, I think “Versatile” would be the most fit. I mean seriously, what else do you call a product that’s designed to solve specific needs without affecting core experiences? At least for me, these needs are practical communication, without affecting my ability to enjoy content consumption, though obviously your needs may vary. 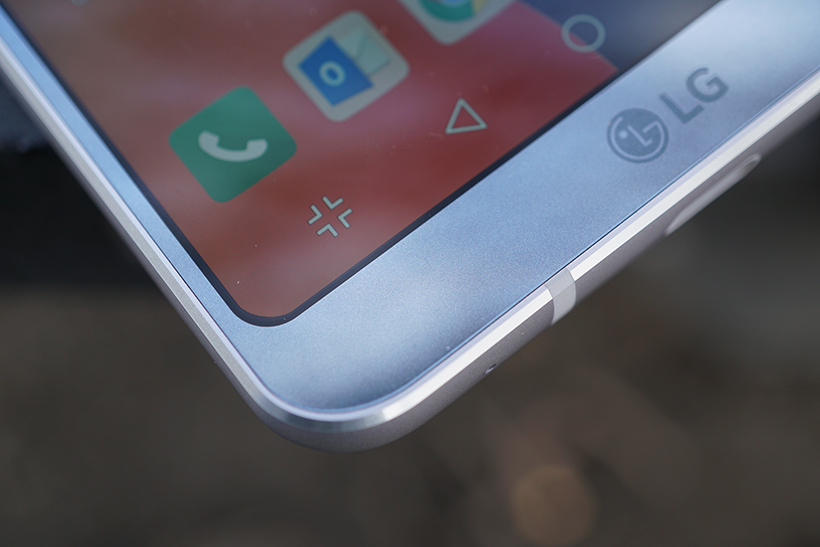 To achieve this new approach, LG came up with a few genius design moves. The bezels got reduced significantly, providing an insane near 80% screen to body ratio. The display became taller, now of 2 x 1 aspect ratio. And since they went fancy, we even have curves on the corners of the display in order to make it stronger in case of a fall. 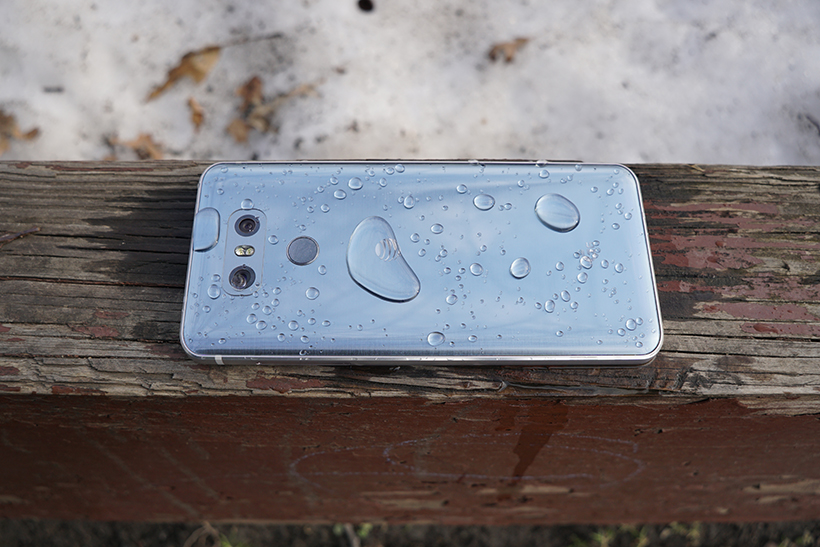 Now fancy is about more than just the curves. The aluminum trim is actually slimmer than it seems, but it provides an amazing sense of grip when holding the phone. The back, now made of glass, has managed to fit a sizeable 3300 mAh battery, in addition to the dual cameras. Oh, and did you notice that it’s all flush on the chassis, and also including IP68 water and dust resistance? 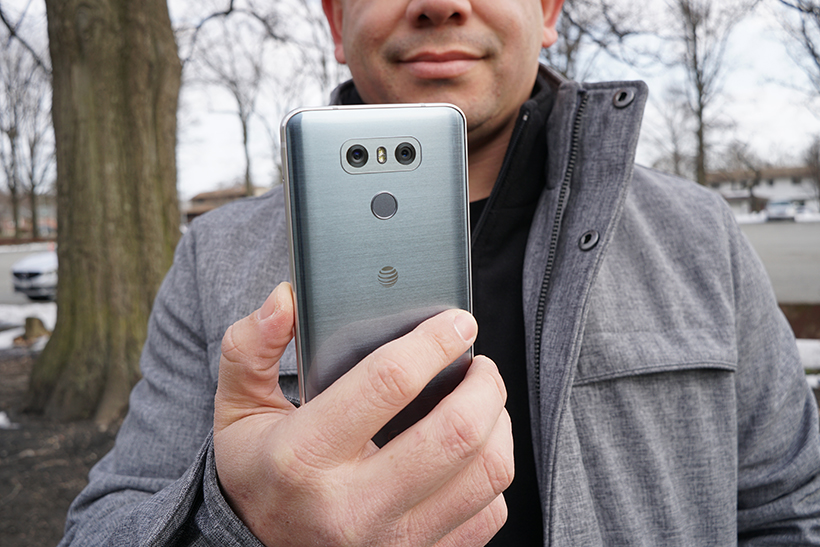 Seriously, the effect is surreal. On a table, and in the hand, this phone feels small, but it actually isn’t, which is both a good and a bad thing.

What hasn’t been so surreal at least in the opinion of some is the choice for internals. We have a Snapdragon 821 with 4 gigs of RAM and 32 gigs of expandable storage, all either steps back or adjacent to the OnePlus 3T, which costs a lot less than this phone. If you ask me, I haven’t complained one bit about performance after nearly a month of going from the demo unit to the final product. Whether it’s your standard daily usage or the most demanding of games, I have yet to find this phone stutter with anything, so I think waiting for the Snapdragon 835 would’ve been a waste of time.

My favorite thing about this phone is honestly the display. We have a 5.7-inch QuadHD+ panel at 2880 x 1440 that LG is dubbing its “Full Vision Display.” This is still IPS technology, but now capable of Dolby Vision and HDR10, which you can enjoy on certain Netflix content at the moment of this review. Color accuracy is top notch, and if your content is of the new 18:9 aspect ratio, you’ll feel right at home. It’s only flaw at the moment is being ahead of its time, as apps are still not enhanced for this new resolution. The result is pillar boxing on key apps like YouTube, which can be annoying. LG does offer a new app scaling feature, but it can result in content not fully shown on the display, and it sadly still doesn’t work with YouTube. We have a feeling apps will scale soon, but at the moment, you will deal with this problem. 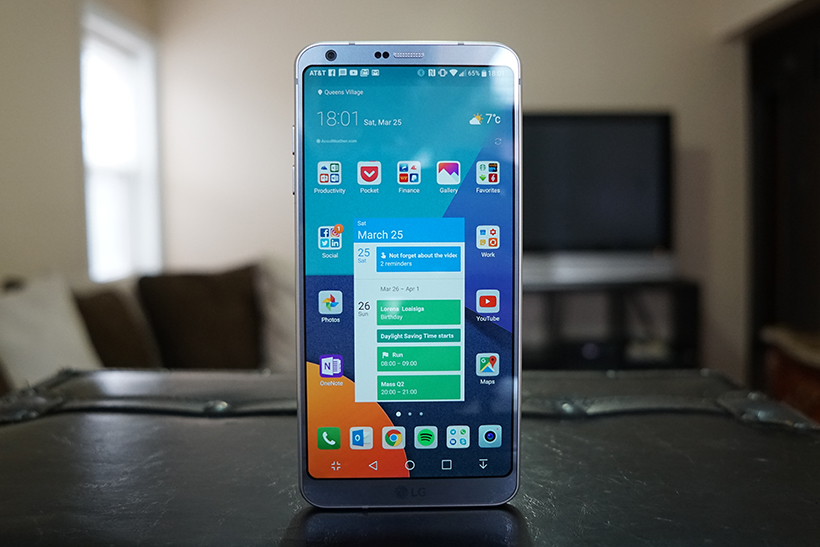 This 18:9 or 2:1 aspect ratio is actually quite practical for LG’s new UX 6.0, which takes advantage of the fact that you’ve got perfect squares at the top and bottom. 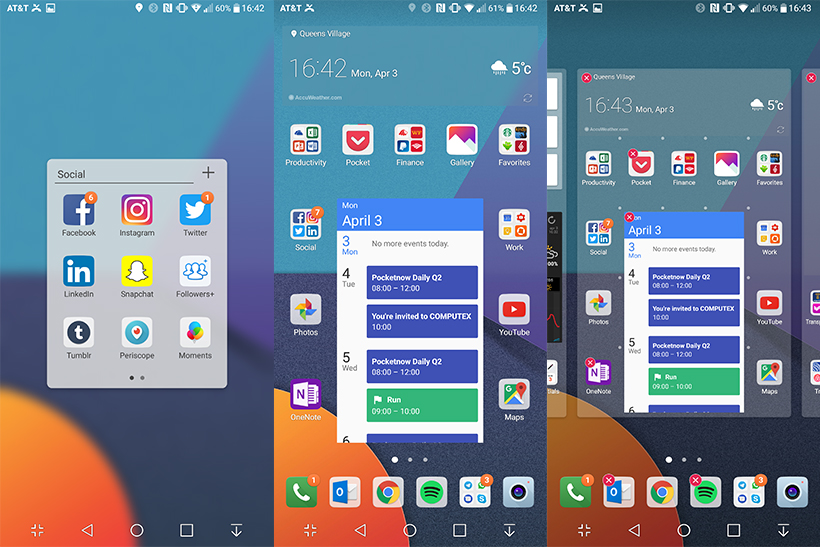 Most of the user interface is design as a split of areas as a result. Since this phone runs on Android 7.0 nougat, split window multi-tasking seems far more like if every display should be of this aspect ratio. I can’t say that I’m a fan of LG’s design choices for its user interface when it comes to iconography, but your taste may vary. 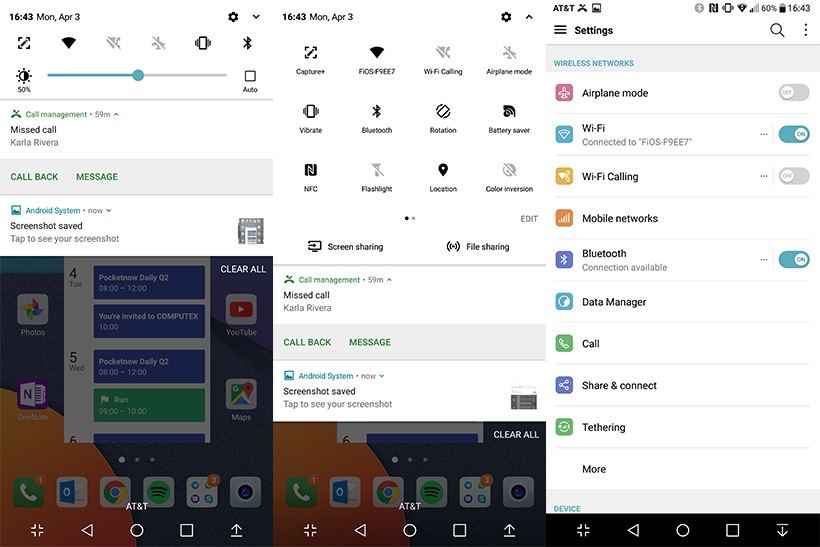 Things I applaud are the fact that LG continues to push for extra functionality with navigation buttons by adding the option to include up to two extra buttons. I’m a big fan of the notification shade button, but sadly the other options available are kind of useless. Q-Slide, which lets you launch certain native apps as windows over your UI is something I rarely use, and Capture is really only for those rare occasions when you need a screen shot. I would love it if LG would create an extra button that becomes context aware, and that helps navigate through hamburger menus at the top left, or become the arrow button, or menu button when needed. Yes, we know you can slide from the left to activate hamburger menus, but it doesn’t make selecting options at the top any easier. Sadly the biggest problem about using a display this tall is that one handed use goes down the drain if items are at the top. 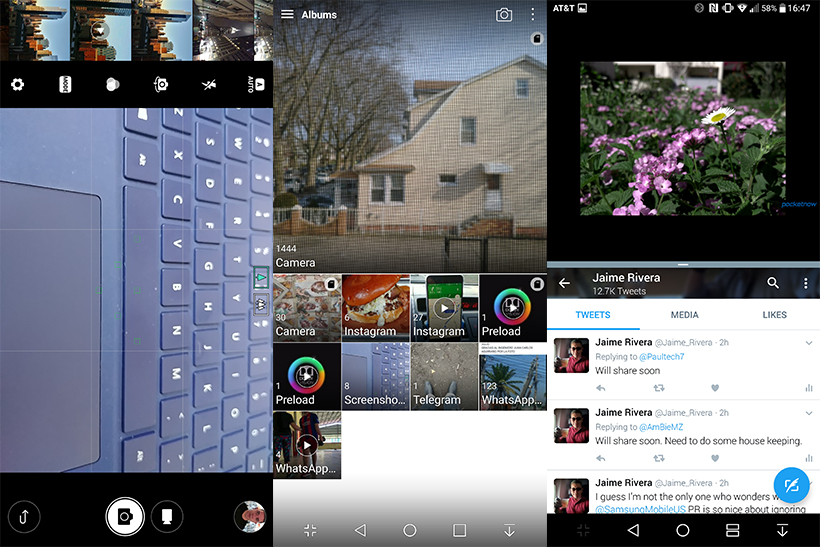 In about everything else, I love how dense the LG launcher has become, and yes, if you’d prefer the option for the App Tray, it’s here as well. 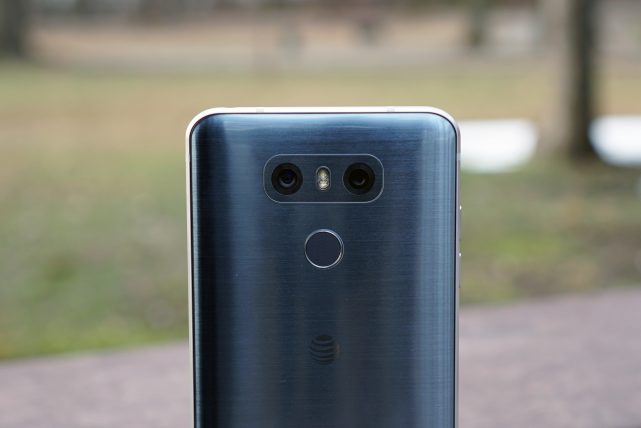 Where I’d give this phone a solid A+, and even add an extra plus if I could, would be the camera experience. LG has spent the last two years impressing with their camera performance, and the G6 has taken what was already good to a great level. This year we have dual 13 megapixel cameras, both sporting the same sensor, the primary with f1.8 aperture and 71 degrees of field of view, the secondary at f2.4 aperture and 125 degrees. This creates the illusion of optical zoom, but instead of getting closer to your subject, it allows you go farther.

It became really convenient in my recent trip to the Vatican, and later Barcelona, where certain areas would require you to step away, and where the G6 solved the need brilliantly. The added megapixels on the wide angle and reduction in field of view have allowed me to trust it just as much as I’d trust the primary camera with great color, saturation, detail, and very little barrel distortion.

The selfie camera can also be used in a wide angle 100 degree mode, or in the standard crop, depending on your needs. There are manual controls for both photos and video as well.

And since we already started talking about video, this is another spot where having a secondary wide angel lens makes filming anything far more practical, even if stability is mixed depending on what camera you use. 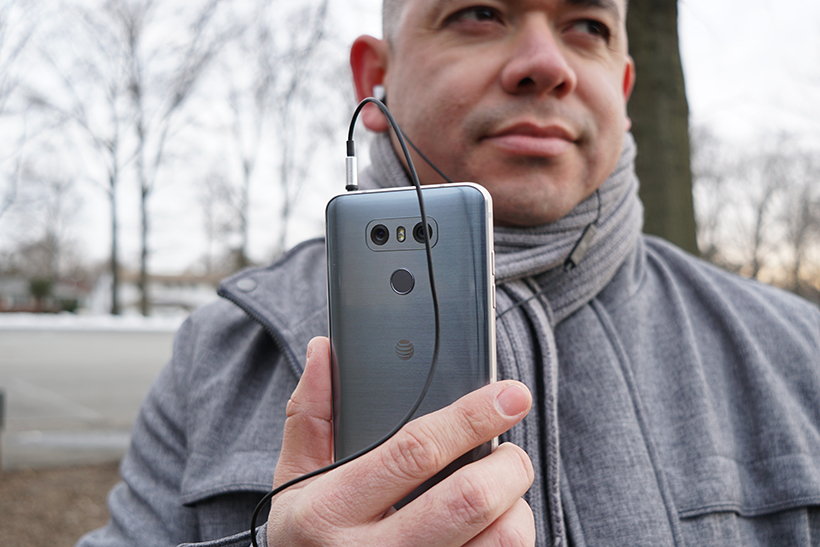 When it comes to the experience of using the G6 as a daily driver, I’d rate this phone on an A-. Phone calls are loud, callers said I sound clear, and Juan is very optimistic on the audio quality of this phone, even without the quad DAC. Sadly for me, I just can’t get over the lack of stereo speakers. Yes, it is probably the loudest single firing speaker I’ve heard, but that’s until you muffle it.

The same goes for things like battery life. Our final review units still run on Android 7.0, and since it still lack the battery enhancements of 7.1, the device barely reaches a day of moderate use. Quick Charge 3.0 does come to the rescue for a quick top up, and if you’re in the US, you can always count on wireless charging. 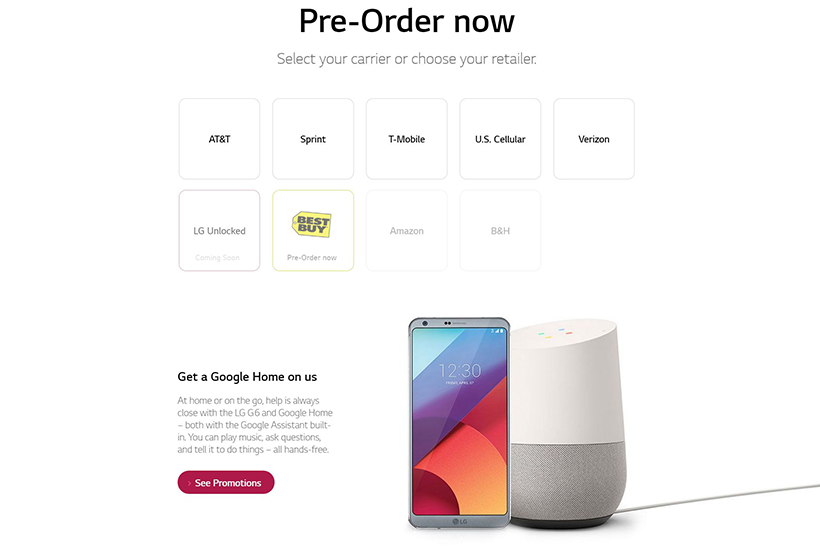 At the time of this review, pricing on the LG G6 really depended on the carrier. We have cases like Verizon, which is selling the device out right for $672, or $28 a month. AT&T is offering for a little less monthly at $24, but if you want to buy it out right, the price is higher at $719. Sprint has it for $708, or $29 a month, and then in the case of T-Mobile, you have the lowest out right price of $650, or a moderate $26 a month compared to the rest. Pre-orders will also land you a free Google Home, so it drops the cost of the phone by another $100 if you do the math. 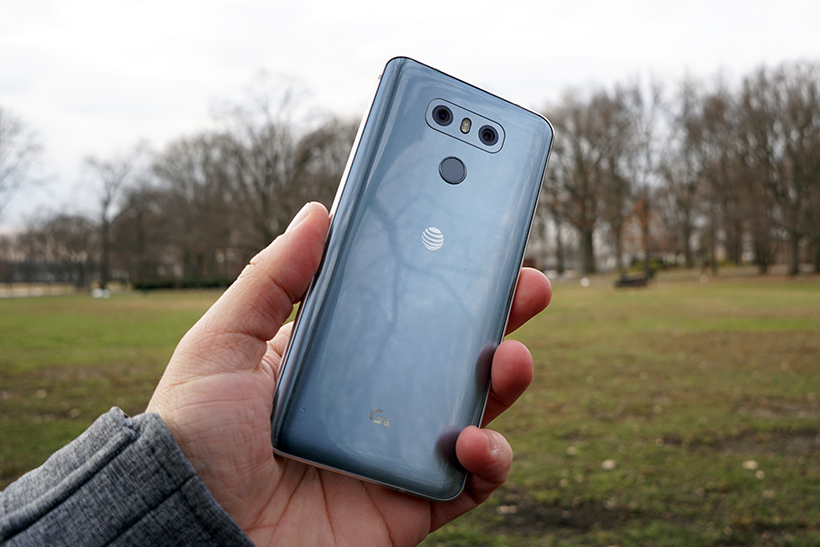 Overall, the versatility of the LG G6 is unquestioned. This is a phablet, that feels like a standard phone. It has a set of cameras that adapts to your surroundings like no other dual-camera combo in the market. Best of all, it sports a design that will turn heads no matter where you go.

I wouldn’t call it perfect. It brings the hardware that I need in order to actually drop my second phone, and use just one device for both communicating and content consumption, but the software still needs work. The battery could sure use Android 7.1 for better longevity, and LG also needs to re-think its user interface if it truly wants to push ergonomics to the next level. Most of the presentation we received from LG focused on how well it would be to use this phone with one hand, but reaching menu items at the top of such a tall display is truly a challenge, even for hands as large as mine. What´s funny is that LG did have features like these in previous G flagships, so all it needs is to bring them back.

For everything else, I’m going to close this review by inviting you to go to a store and hold one for yourself. This is really a product that’s hard to describe on a video, or through a text review. Try it out. I’m sure that’ll help you understand why this product is worth your money. Welcome back LG!

Today’s best deals come from Samsung and OnePlus, where we have the Galaxy Z Fold 3, Galaxy S21 series, and more on sale

Along with the MagicBook V 14 and MagicBook 16 series, HONOR also…