LG definitely did an amazing job with its launch of the LG G4. Not only does it have one of the best cameras in the industry, but really the whole experience of using a G4, from the expandable storage, to the replaceable battery, to that display, to the replaceable backs, all leads to no reasons for complaints from this new flagship. Surely no device is perfect, but this is one we highly recommended in our review, and if you’re looking out for one, T-Mobile might be your best way to go.

T-Mobile’s LG G4 promo twitter account has just confirmed that we should expect the device as early June 2, which is really great news. T-Mobile also has a giveaway of the LG G4 for a couple of lucky winners to test out the device before it becomes public, and yes, there’s even a US tour to show the phone off. Just keep in mind that T-Mobile’s LG G4 Promo twitter account is not really T-Mobile’s official account, so we’re not really confirming that this is the date. That said, we highly doubt that it’s not, as yes, the account is controlled by T-Mobile. The tweet seems to no longer exist though, so it could mean a lot of things. 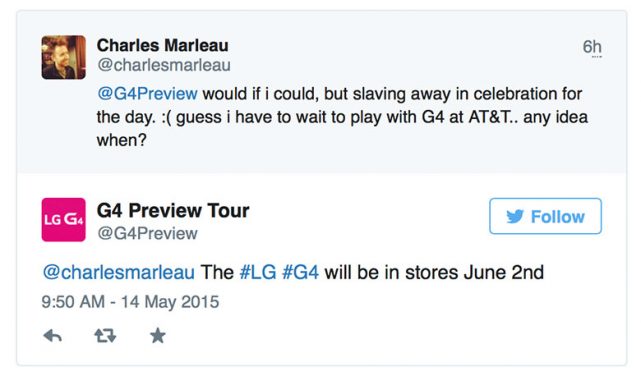 What are your thoughts on the LG G4? Are you getting one when it launches on your carrier of choice?