“A stunning shooter and a beautiful leather-bound chassis come together to make this flagship shine in spite of its software.” That’s how Michael Fisher summed up the LG G4 when he scored it an 8.5/10 in our full review nearly three months ago. Not all of you agreed with his assessment – some thought he was too hard, others, too soft. Now that the G4 has had a little time to age, we thought we’d put it in the hands of another member of the team and see how it stacks up through another set of eyes.

Other the years I’ve been quite impressed with LG. I purchased the LG-built Nexus 4 out of my own pocket (and two members of my family use them as their daily drivers). I was enamoured with the Nexus 5 (also built by LG), which I had paired with an LG Bluetooth headset and the LG G Watch. (The Nexus 5 is currently my my wife’s daily driver.) I then moved on to the Motorola-built Nexus 6 and Moto 360 for my daily use, but my admiration of LG’s products hadn’t waned.

That said, I’m an “Android Purist” – OEM skins (or whatever you want to call them) drive me nuts. The G4 doesn’t run “stock Android”, instead, like virtually every other major OEM, LG has customized and “branded” the experience. How has the LG G4 has fared as my daily driver? Let’s jump right in!

Let’s start with what’s under the hood. LG opted for a Qualcomm Snapdragon 808 inside the G4 – sidestepping the 810 controversy (or adding to it, depending on your perspective). LG confirmed to us that its decision to go with the 808 rather than the 810 came long before the 810’s “thermal performance issues” made the headlines. The 808 is a 6-core processor, with a pair of A57 cores running at 1.82GHz, teamed up with a quad-core A53 cluster at 1.44GHz, backed up by an Adreno 418 GPU. 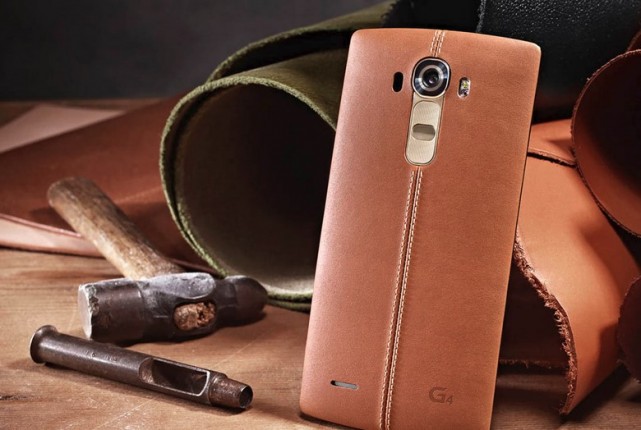 Next we’ve got storage and RAM. LG packed 3GB RAM into this leather-clad beast. Our review unit was equipped with 32GB internal storage but LG also included a microsd card slot – something that’s sadly missing for many other flagship phones. Though I only populated the slot with a 32GB card, it’s capable of accepting cards up to 2TB in size – even though it seems like 200GB is the biggest you can get today (with 512GB reportedly coming sometime this month).

After spending time with the Nexus 6 – a phablet by any definition – I was hesitant to go back to a “regular” smartphone. Thankfully, the G4’s 5.5-inch screen isn’t significantly smaller than that of the Nexus 6, though the resolution did made everything look like it was in “large print for the vision impaired” – which wasn’t necessarily a bad thing. It was crisp, clear, and easy to read.

The phone is much easier to hold and operate in one hand than larger phablets and it’s leather back not only feels great, but adds a level of professional flair when it’s tucked in a breast pocket – which is where I normally carry my phones. Yes, over time the back has shown minor scuffs and nicks, but it’s leather, that’s what it’s supposed to do. If you think the inevitable wear marks don’t add a certain depth and character to the phone, simply pop off the back and replace it with a new one once you feel it has too many battle wounds. That’s something few other phones let you do.

How does the LG G4 perform? It’s currently running Android 5.1 Lollipop and, coming from the Nexus 6, to me the G4 seems a little “hesitant” in spots, but overall, it runs quite well. Apps are quick, scrolling is smooth, and I never ran across a single task that seemed to bog the system down.

Like Michael Fisher opined in our full review, “this is still an Android phone running a very heavy skin” and its performance reflects that. To remedy that, many of the “heavier” aspects can be lightened up by running Google’s own apps. Running the Google Now launcher, supplemented with the Gmail, Google Calendar, and Google Keyboard instead of LG’s own apps seemed to breathe new life into the phone, eliminating much of the observed lag.

The biggest downfall to the software on the G4 – at least on our T-Mobile review unit – is all the bloatware that comes pre-packaged from both LG and T-Mobile:

Each of these apps occupies space on the device and there are (at least) two upgrade mechanisms to keep all those apps up-to-date. Though the apps themselves can be disabled, they can’t be uninstalled.

Hopefully someday we’ll be able to charge rent for every app that carriers and OEMs insist on pre-packaging on our phones – or uninstall them if we so desire.

Hardware and software impact battery life, that’s for sure, but we’ve already covered those aspects separately. Once everything is slapped together, how much time can you get from each charge? Before we answer that, let’s talk about charging, shall we? 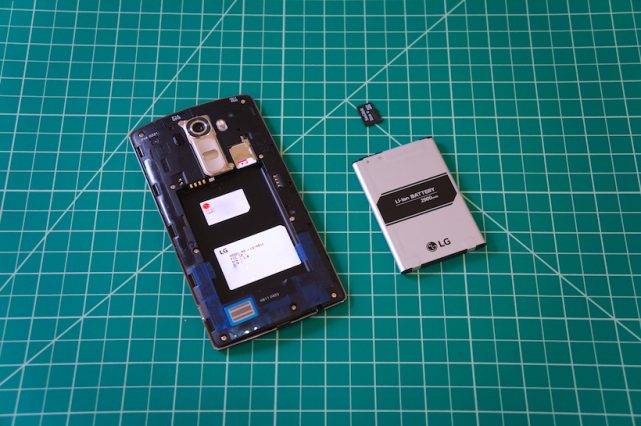 Another omission from the LG G4 is Qi wireless charging support. Though you can buy a case with Qi built-in, and can even hack Qi support into your backplate for under $15 (I’m still waiting on parts to apply this hack to my review device), Qi is showing up in more places and it would have been nice for LG to include support out of the box.

The remedy for both of these concerns is the removable battery that ships inside the phone. Our review unit even included a spare battery and compact battery charger. When you phone runs dry, simply swap the battery and you’re immediately up to 100% – no waiting. Of course you’ll have to reboot after the swap, and you’ll have to recharge the first battery, but the convenience of a removable battery is something that’s being selectively bred out of our phones, and it was refreshing to have that option again.

In my very unscientific tests I was able to go all day long and into the late evening without requiring a recharge. The G4 even comes with a “Game optimizer” in its “Battery & power savings” settings which promises to adjust video quality in games to help save battery. I generally ended the day well into the bottom 15% of the battery – which triggers battery saving mode to help extend its use-time at the cost of performance – but I almost always made it through the day before plugging in. Screen on time contributed to around 4.5 hours of my daily use, depending on brightness settings and what kind of stuff I pushed to the screen. In practical use the 3,000 mAh battery (which ships with all retail versions of the device) will last you all day long – no question there.

Like we said on our original review, no smartphone ever gets everything right, and the LG G4 is no exception to that rule. However, we noted that the software was the phone’s biggest shortcoming, despite all the updates that have been pushed to the phone and its apps that still holds true today. However, Google’s own apps have gotten so good, and integrate so seamlessly with the Android operating system (despite OEM overlays and customizations), much of the complaints we had about software can be easily remedied simply by replacing the stock apps with Google’s versions.

Removable batteries and microsd slots are features which are quickly dying out. The fact that a top-tier OEM managed to include both, and did so on one of the best looking smartphones on the market today is proof that they can be included without hurting the size or aesthetic of the device.

The specs tell us the camera in the G4 is a 16MP sensor with an f/1.8 aperture and a 1/2.6-inch sensor size, optically stabilized across three axes to correct for up to two degrees of motion and fitted out with a Color Spectrum Sensor for improved white balance, among other things. All that lingo means the camera in the G4 is still one of the best smartphones cameras you can buy today – and the pictures back that up.

Speaking of buying, T-Mobile just knocked $120 off the LG G4 when you buy it through them – and for a limited time (and while supplies last) you’ll get a second battery with a charging cradle and limited-edition leather back cover for no extra cost.

The bottom line, given all my options, would I actually use the LG G4 as my daily driver. With the exception of the Nexus S (which was awful), from the Nexus One all the way up through the Nexus 6 I’ve been a Nexus fan. I still am. However, if you see me walking the streets in Utah, take a look in my shirt pocket. You’ll see an LG G4 – not a Nexus 6. That’s saying a lot.