The elusive LG G4 Pro is very much real, a benchmark listing suggests, and it’s likely coming soon with a Snapdragon 808 chip and 4GB RAM in tow.

Wait, wasn’t the G4 Pro or Premium supposed to be canceled in favor of a more unique V10 device with an auxiliary “ticker” display located just above the standard, primary 5.7-inch panel? Well, yeah, but somewhat similarly, the metal-clad Class was only expected out on Korean shores, and now it’s reportedly headed for the US too.

Bottom line, a thick cloud of confusion hovers around LG’s flagship release plans for the remainder of the year, and a GFXBench visit from an H900 prototype doesn’t clear everything up. The phablet is listed as G4 Pro by the benchmarking authority, yet it could always go official under the V10 name. Or perhaps it’ll be called one way in certain markets, and the other outside those.

Whatever the final branding decision, this H900 will not stray very far from the hardware direction set by the non-Pro G4. The touchscreen is ever so slightly larger, at 5.7, not 5.5 inches, while the pixel count is identical: 2,560 x 1,440, aka 2K or Quad HD. 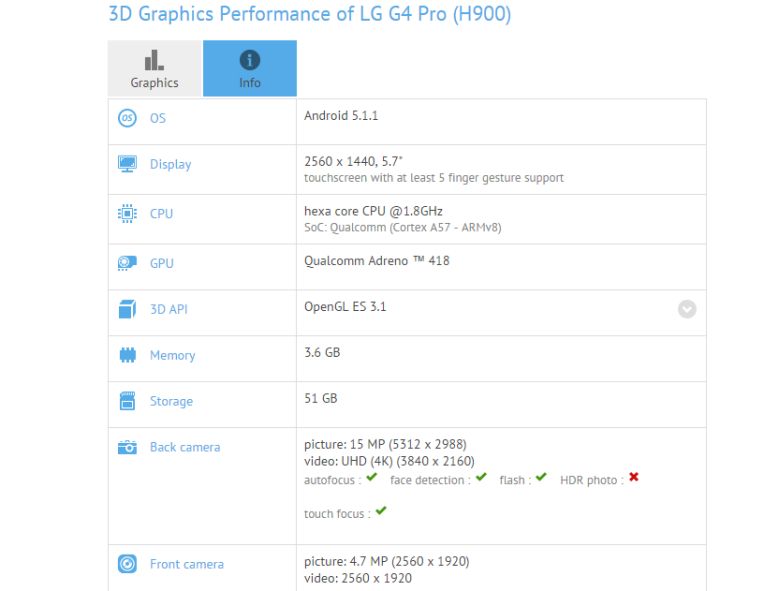 Beneath the hood, since the Snapdragon 820 processor shall barely be ready for primetime early next year, it makes sense to go the hexa-core but stable 808 path rather than the octa but fiery hot 810. The biggest upgrade concerns the memory department, where the G4 Pro adds a fourth gig in the equation, with internal storage space also bumped up to 64GB. Hopefully, not at the expense of microSD expansion.

Running Android 5.1 Lollipop on the software side of things, the unannounced giant will apparently retain the base G4’s 16MP rear camera, downgrading the selfie-friendly megapixel tally for some reason to 5. All in all, that’s hardly a remarkable spec sheet, so the secondary display is truly the make-or-break element.