LG G2 review rebuttal – I really like this phone

Michael, Brandon and Tony had this really cool idea that we’re dubbing “Review Rebuttal”. Instead of loading you with five reviews of the same phone in different carrier variants, the idea is that a second editor of the team is given the chance to test a smartphone for an extended period of time in order to provide his second opinion. This is not a second review, but instead more of an editorial that intends to provide some additional context of what it feels like to use a phone over an extra week, or two after we’ve reviewed it. So yes, I get to be the guinea pig of this concept, and we’ll start this off with the LG G2.

LG’s new flagship is definitely a phablet in smartphone dimensions, and as such, it has been the subject of much debate lately. You’ll even notice that Michael boosted his review score from 7.7 to 8.4 recently, and that mainly has to do with how much we want to love this phone, even if some of us just can’t. Please make sure you read Michael’s full review of the G2 for details.

I’m going to start this off with a little disclaimer: I didn’t want to review this phone. Actually, I’ve never been interested in reviewing any LG smartphones in the past. If you watch our live coverage of LG’s launch event of the G2, I’m sure you’ll notice that I was anything but excited about the launch of this device. Surely I wanted to see the device that’ll inspire Google’s next smartphone, but for me it was more a Nexus thing than an LG thing.

Yes, I do own and love other LG products. I’d recommend their Plasma TVs to anyone, but my impression of their smartphones has always been very negative. Before using the G2, my opinion was that LG built pretty phones with terrible build quality, and cheap components. I’d deliberately skip their booth in trade shows, I would never recommend their phones to my friends, and logically, I would’ve never spent one dime on them either.

Guess what though: I’ve changed my mind.

I know I should never judge a book by its cover, and if there’s one thing I’ve learned about LG during the past two weeks, is that at least one of their departments is working hard in making this phone stand apart. That would be the hardware team, and here are my thoughts as to why: 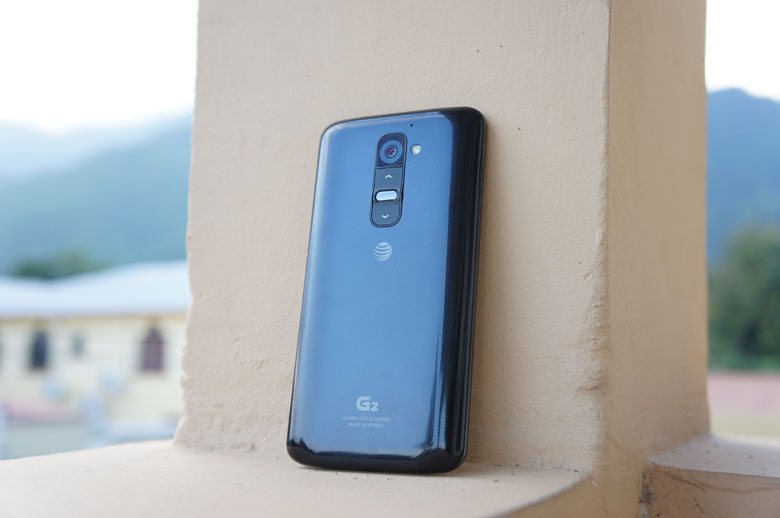 Michael expressed his disappointment about LG’s decision to ditch the glass-on-glass design of the Optimus G in favor of plastic for the G2, and I partially agree. Surely glass or aluminum are better-quality materials when compared to plastic, but I’m one of the few that actually likes plastic phones. I’m not a fan of using cases, and avoiding this with a glass or aluminum phone is asking for trouble. Scratching and chipping aluminum is easy, and smashing a glass-back is also common. I’ve alway felt that plastic phones age better, and once you hold the G2, you’ll notice that there is a level of heft to this phone that gives it a premium feel.

I feel there’s a reason for this plastic though. Some of you may have not noticed this, but the G2 sports a gorgeous 5.2-inch IPS display that’s almost the exact same size that we saw on the monstrous first-generation Galaxy Note. Still, when you stack it beside a Galaxy S 4, you’ll also notice that both devices are almost identical in size. To pull this off, the display has almost no bezels, and if LG had to use plastic to make this design possible, I’m willing to forgive them. The design looks futuristic and elegant all around, and the color accuracy and viewing angles of the display are captivating. Yes, having the power and volume buttons at the back is awkward at the beginning, but I’d say I became used to them after the second or third day, and if you don’t like this, you can simply double tap the display to wake the device from standby.

The internals chosen for this phone are among the best you can buy for any Android smartphone. This was one of the first devices to launch with Qualcomm’s Snapdragon 800 processor, which is both powerful and efficient, and the celebration continues with its 2GB of RAM, and all the rest of the 2013 bells and whistles like an IR blaster, Wi-Fi 802.11 ac, etc. We’ll talk about performance soon, but overall, I’d call this the most future-proof phone of 2013 when it comes to specs and build quality. 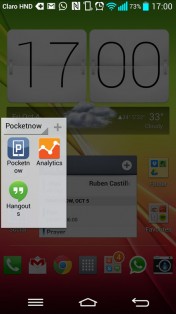 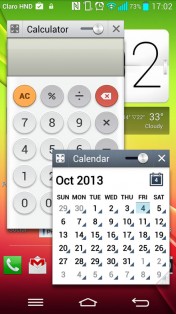 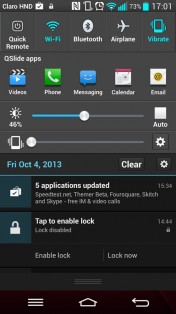 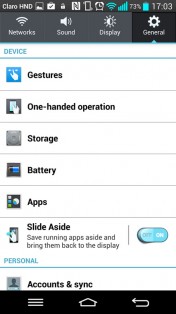 Sadly, it seems that the hardware department doesn’t have the best relationship with the software team. LG’s futuristic design of the G2 is just trashed by LG’s custom UI. The experience is so bad that I wonder why LG didn’t just launch this phone with stock Android and leave that job to the experts. Honestly, I feel Michael was just too generous in calling LG’s UI tacky.

My disappointments are mainly because of two things: First, the visual aspect of the UI is both cheap-looking and sloppy. If Samsung’s TouchWiz was a toy, this would be its cheap knock-off. I find spelling mistakes here and there, and the fact that the names of apps are overlapped in folders, just makes everything look bad. Now don’t get me wrong, many of the ideas are actually cool, like in the case of the QSlide apps, which provide you with hovering windows that allow you to take advantage of the big display. The problem is their visual aspect, which is so poorly designed that I personally decided to just turn them off.

My second disappointment is that the UI even manages to bog down the phone. Yes, imagine lag and sluggishness in launching apps on-top of all this powerful hardware. Seriously, some things that aren’t broken, don’t need to be fixed. At first I thought it could be a problem with my review unit, but once I loaded the free version of Nova Launcher, and noticed that all the sluggishness went away, I actually began to enjoy using this phone.

I’ll admit that Nova launcher rescued this phone for me, but internally, all of us in Pocketnow debate if it’s fair to give LG points for something they could’ve clearly done better. Yes, we know that Android’s biggest benefits lie in its customizability, but you shouldn’t be forced to do it either. Most of the great third-party launchers are not free, and it’s not like if LG gave you a discount for buying this phone with lesser-quality software that you’ll have to pay to replace. At times when HTC has done such an amazing job with Sense 5, LG has no excuse, they need to try harder.

LG’s rip-off of Samsung continues in the camera UI, which provides you with an identical copy of all the shooting modes you’ll find on a Galaxy S 4. I know that LG came-up with things like the Dual Shot first, but overall the UI is a direct copy of what Samsung. This is actually a good thing, and Michael praised it in his review, but take my word for it, you won’t need them. This is the Android camera to beat in 2013. I can’t believe it’s taken this long, but I can finally recommend an Android smartphone for its camera. The resulting photos provide great color reproduction and saturation, and the Optical Image Stabilization provides night shots that will give most Lumias a run for their money. I never needed to use any shooting modes for these photos. Simply set the camera to Normal, allow it to focus, and let the camera do the rest. I’ll admit the phone is slow in getting those night-shots, and specially after I compared it with the iPhone 5S recently. Still, the results pay off. 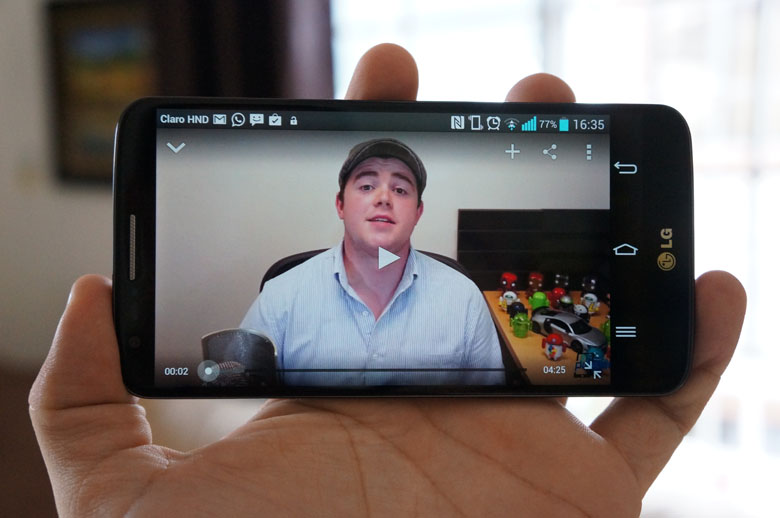 Probably one of the things that has shocked me the most about this device is battery life. You simply can’t kill this phone. The Snapdragon 800 proves that it was worth waiting for. I get two solid days of use with this phone, and that’s without mercy. I used this phone significantly for phone calls, and since I love the display, videos and games were also part of my daily usage, and those two days were guaranteed every single time. It also chargers significantly faster than even the Galaxy S 4, so not having a replaceable battery is not a problem, really.

Sadly, I can’t recommend that you stick to the 16GB model of this device. There’s no expandable storage here, and my review unit came with just 24GB out of the 32GB of storage, so I’m sure that those with a 16GB phone will barely get 8GB available. This can be the perfect multi-media and gaming machine for all of you, as long as storage doesn’t become a problem.

As in the case of Michael, phone calls were good, but not amazing, and you’ll also want to play your videos with headphones since the speaker on this device is just not loud enough to be heard over a crowded place. 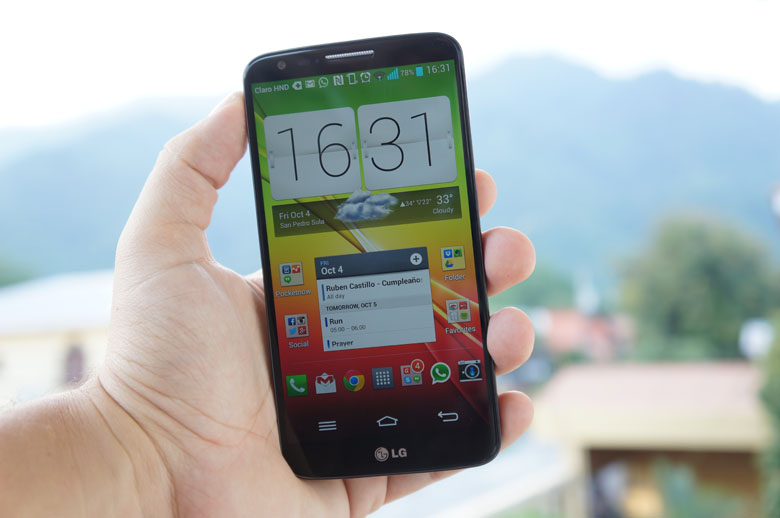 Overall, I’ll admit that I love this phone. I never thought I’d ever say this about an LG phone, but this phone deserves my respect. It’s a powerful and reliable machine that will make the toughest of users happy. If you choose the 32GB model, you’ll have the perfect gaming device, or the perfect camera phone as well. And even if you’re not a gamer, and you just want a phone that handles the basics well, the fact that you’ll get more than 2 days of battery life will also suit your needs well.

Sadly, it’s those basics that I want to talk to you about. I’ll have to agree with Michael’s score of 8.4, and here’s why:

Even though he called the hardware “uninspired”, I’d give it a solid 10 for how LG pushed the limits of design with this phone. Sadly there are two things about this device that disappoint me enough to drop that 10 to an 8.4. First is the software, which is sloppy and just not suitable for such flagship hardware. Second is the lack of expandable storage and a replaceable battery in all the US variants of this phone, which is even more disappointing when you learn that the Korean variant does include these features out of the box, so this was clearly not a design limitation. This multimedia monster deserves to be set free, and I just can’t understand why LG locked it down for the US.

I guess the main reason why I’m willing to continue loving this device, and using it as my daily driver, is because it runs Android, and I don’t have to put-up with any of its software limitations. Again, solutions like Nova Launcher and Swiftkey saved this phone for me, but as I explained earlier, we can’t give the phone any additional points over what LG was responsible for doing right. This device is priced as a flagship, and as such, you deserve a good experience out of the box for your money.

Make sure you share your thoughts and impressions on the LG G2 in the comments. 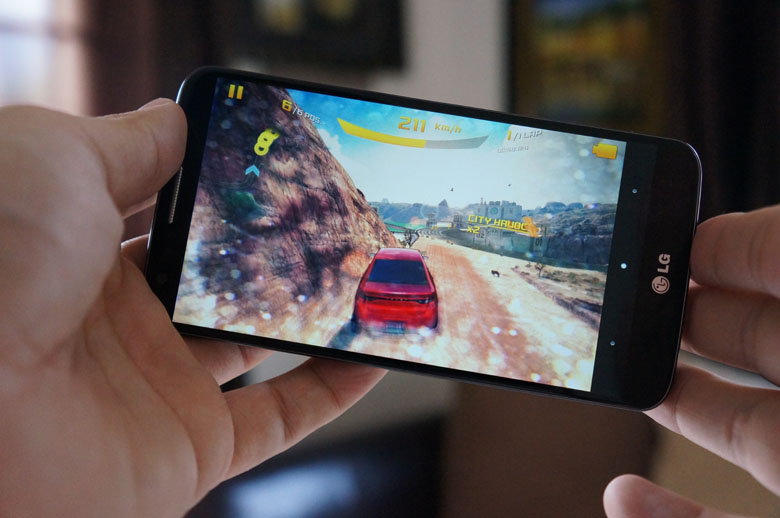