Our full LG G Flex review landed a while back, but the arrival of the AT&T variant demands we take a second look at the world’s most curvaceous smartphone.
Published 04 February 2014, 13:36 EST

Sometimes when we get a carrier-specific version of an already-released smartphone, we’ll go ahead and do a separate full review on it – like we did for the Galaxy Note 3, whose AT&T version got a full review just two weeks after the initial review landed for the international version. Other times we’ll do what’s called a “review rebuttal,” where another Pocketnow team member takes a second look at the same device; that happened for the LG G2, HTC One max, and the South Korean version of the LG G Flex.

For the AT&T version of the G Flex, though, the device has come to me – the guy who spent the most time getting to know the SK-Telecom version, who flew out to San Francisco to be briefed on it, who spent 3100 words covering its high and low points in an extensive review. So a rebuttal is inappropriate; there’s nothing to rebut. A second full review is equally improper; not enough here is different. And it’s too early for an After The Buzz.

The solution: an editorial-style mini-review taking you through everything we’ve learned in our week or so with AT&T’s variant of the LG G Flex. We won’t touch on things which haven’t changed – only on aspects detectably worse or better than on the South Korean version. Sound good? Let’s go!

Prying the G Flex from its utilitarian AT&T packaging was nothing like unboxing the SK Telecom version. Gone were the sleek lines of the curved LG box and the complimentary set of QuadBeat 2 earbuds; in their place was a thoroughly typical first-look experience, with none of the luxurious touches that came before. It seems a curious point to harp on, but come on, AT&T: for a device that costs $299 on a two-year contract (or $695 full price), the user deserves something more than the usual orange-and-white corrugated cardboard. 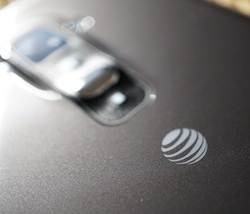 Fortunately, the negative side of the carrier modifications largely stops there. For the LG-D950 version of the G Flex, LG has removed the DMB-TV antenna and its accompanying silo, which is a shame if you enjoyed faux-fencing with rival G Flex owners, but it does a nice job of further streamlining the phone’s already-smooth lines. The remainder of the hardware remains largely identical: front and back LED notifiers, 13MP camera lens on the back, small LG insignia below the mammoth display – it all stands largely as it did on the device we remember from last year. The “Titan Silver” finish now bears a small AT&T logo beneath the button collective on the back cover, but it’s not too imposing – and the paint job seems just as ready to self-repair as it did on the LG-F340.

AT&T’s G Flex is also up to the challenge of endurance; it easily lasts a full day – and then some. And then some more. The 13.3Wh (3500 mAh) power pack, in concert with the Snapdragon 800 processor and reduced display resolution, routinely delivers over 6 hours of screen-on time even with heavy use. Given my personal habits, that translates to significantly more than two days of moderate use on a single charge. Those are excellent numbers, and they make the G Flex one of the only smartphones I feel comfortable taking on an overnight trip without the charger, or forgetting to plug in while I sleep – even while passing most data over LTE.

Speaking of LTE: having access to true 4G performance on a media-centric device like this makes a huge difference, as you might expect. The first thing I did after initial sync was disable the G Flex’s WiFi, so I could accurately judge the phone’s performance over America’s second-largest network. With speeds averaging 15-20Mbps down and 4-7Mbps up, I never had to fall back on my home or office WiFi connections for anything: from Spotify on Extreme Quality to Netflix HD on the data side, to phone calls in the blowing wind of the subway platform on the voice end of the equation, AT&T’s network performed as well as it usually does in Greater Boston, which is to say: excellently. 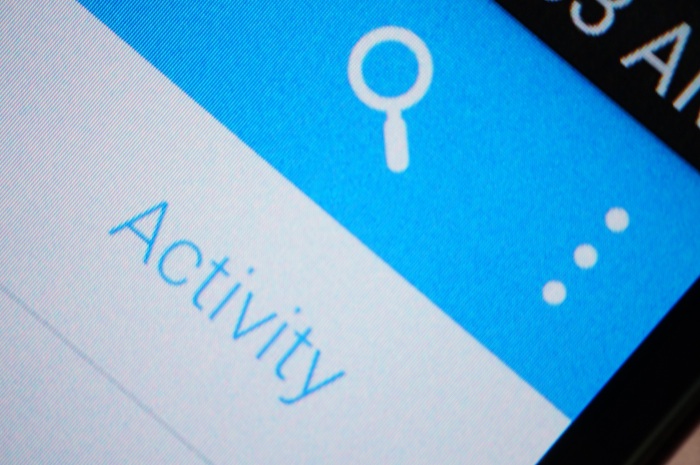 To be sure, it hasn’t all been a cake walk. The 700R curve of the G Flex’s screen is still quite comfortable, but the P-OLED display itself was never a show pony: at six inches, 720p resolution is a little hazy, and the AT&T device’s panel is significantly worse than the one I encountered on the SK Telecom version. There’s a subtle blue “stain” on the right side of the screen that’s not mirrored on the left, and there’s also a big problem with temporary burn-in. At the very least this is indicative of quality control problems across batches – and it all conspires with the display’s mottled, wet-newspaper look to produce a picture that’s almost always detectably grainy. Colors are vibrant, of course, and blacks are their usual bottomless inkwells, but that won’t be enough to save this screen for those looking for a sharp viewing experience. 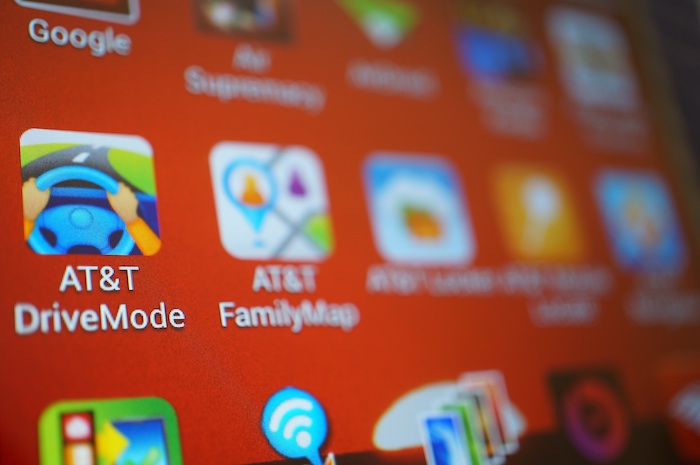 Fortunately (or not, depending on your priorities) the display is the G Flex’s low point. Other shortcomings more appropriately belong in the nuisance category – as in the case of the stock keyboard, whose autocorrect still hasn’t been properly calibrated for U.S. English. There’s also the usual shortfalls of carrier customization: Ma Bell’s bloatware pops up at the least opportune moments, like when all you want to do is find a name in your contact list, but you’re forced to wait for the “value-add” of the AT&T Address Book to load. (Still, we have to give American carriers some credit: the bloat on the U.S. version is nothing compared to the pages worth of crapware on the SK Telecom device.) 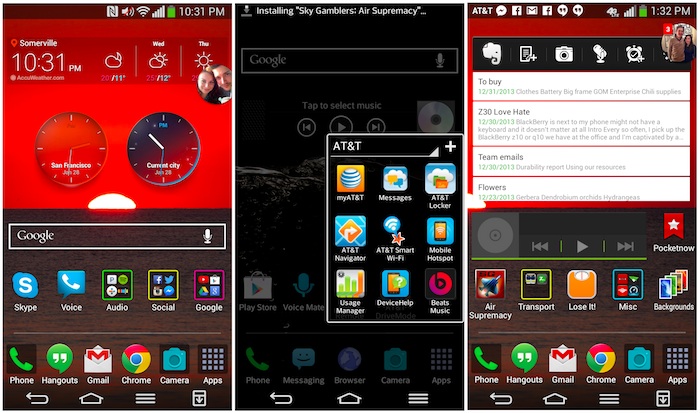 Finally, yes: the LG UI is still as extensive as ever, but counterbalancing its gaudy neons and occasional unwieldiness are real multitasking features and intelligent use of screen space – the same compelling add-ons that caused us to take such a shine to the G Flex in the first place. 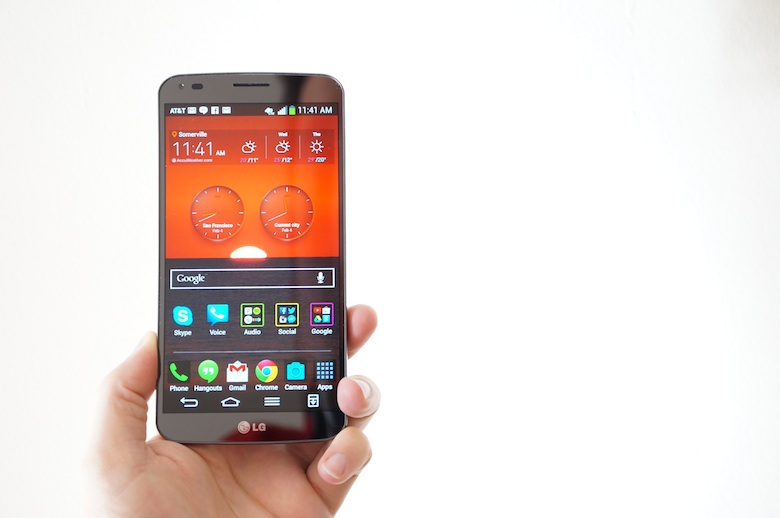 Overall, there’s very little you’ll discover in the AT&T version of the G Flex that you wouldn’t have found in the previous incarnation. If you’re not a fan of large smartphones or you place a high priority on ultra-sharp displays (or you have a genuine need to have the latest software version at all times) this device still isn’t for you. But if you’re the type of person who likes the idea of a long-lasting Android smartphone with customization options galore, a self-healing paint job, and a comfortable curve that offers practical benefits as well – rejoice! The G Flex has finally made it to American shores. Sprint and T-Mobile have their own versions of the device, of course, and if those are the carriers that function best where you live and work, then by all means: seek out the yellow and magenta variants. If they work even half as well as the AT&T version does, you’ll be well matched – assuming the G Flex is the right fit for you.

To find out if that’s the case, check out our full G Flex review, containing sample photos and video, gaming performance analysis, and an in-depth tour of LG’s user interface – or just tune in to the video review embedded below. Then click over to our G Flex review rebuttal to see Taylor Martin’s thoughts on the world’s curviest smartphone!