Is LG’s curviest smartphone a match for 2014’s flagship beast? We take a spec sheet-level look in our LG G Flex 2 vs LG G3 specs comparison.

We’ve already explored in an initial comparison video what the differences between the LG G Flex 2 and LG G3 are in everyday usability, but what are the cold hard facts? On paper, which is the better phone? That’s what this LG G Flex 2 vs LG G3 specs comparison looks to decide.

Unsurprisingly, the newer phone comes out on top, with four spec wins to the G3’s two. But the G3 does earn those two – this isn’t exactly a runaway victory. One of those two G3 victories is the display, and that one’s easy to explain; the G Flex 2 has to sacrifice display performance for the curve, as it uses an entirely different technology.

The second loss is processor clock speed, and that one’s also quite simple to understand. The G Flex 2 not only steps up to an octa-core chip, but one with a different instruction set and microarchitecture from the Krait-based 801 in the G3. As such, direct cycle-to-cycle comparisons become quite meaningless.

The point here is, the G Flex 2 is an all-around better smartphone. You can’t really go wrong buying it over the G3 unless you’re looking for a cheaper phone or one without the bendy display. Or at least, that’s what the specs have us believing.

Looking for more on the G Flex 2? We’ve got you covered with additional coverage – including videos and spec comparisons – right here. 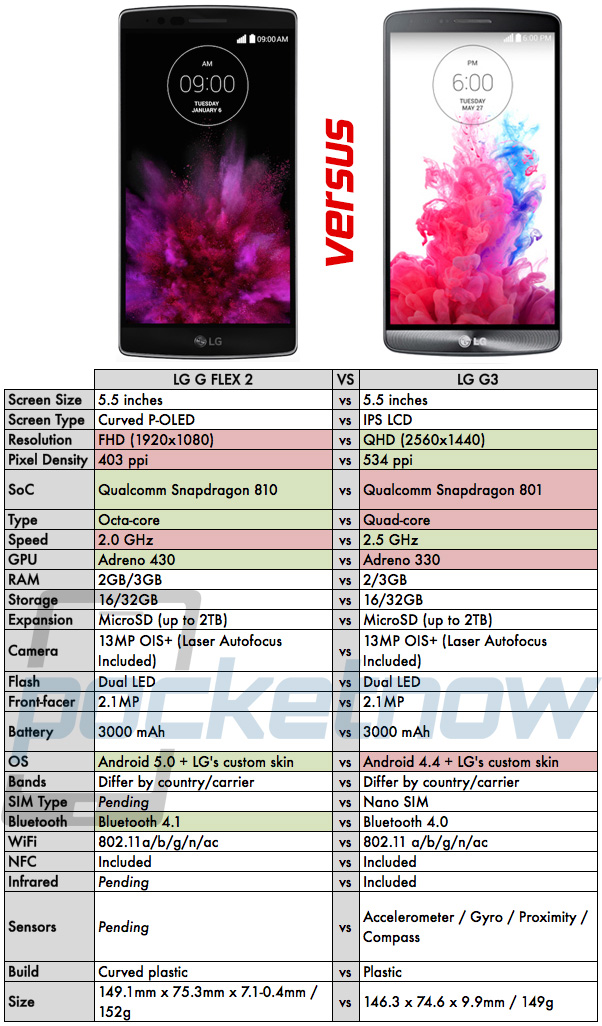