More Pictures Of the LG E960 Nexus In the Wild

After seeing the LG Nexus in the wild yesterday we are now presented with another set of pictures and information on the phone.
Published 10 October 2012, 07:55 EDT

We’ve recently seen pictures of the LG E960 in the wild; the phone is believed to be the next Google Nexus device and now we’re seeing even more images of the phone thanks to someone who claims to have a prototype and is willing to answer all questions.

The phone appears to be identical to the one we saw yesterday (sans the protective, design-concealing outer case) with the pattern on its back and no physical buttons. Reported specs seem to confirm earlier rumors: quad-core processor clocking at 1.5GHz aided by the Adreno 320 GPU, eight-megapixel camera, 1184×768 resolution, 2GB of RAM, and 8GB of internal storage (sans microSD card, but rumors also talk about a possible 16GB variant). NFC has not been reported by recent approval documents imply its presence (which is a must for a Nexus knowing previous models).

From its rounded corners and general aspect the phone appears to be similar with previous Nexus devices made by Samsung. The only question that remains is whether this device will be the only Nexus phone or will it be joined by another (others) as multiple-Nexus-device rumors implied? 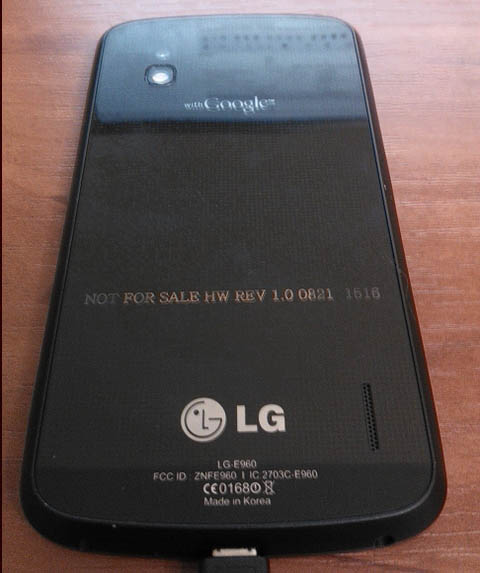 Update: The Verge has been sent a picture snapped off of a Carphone Warehouse inventory system where you can see a certain LG Nexus 4 being listed. Said phone appears in both black and white and the naming could make sense since this would be the fourth Nexus device. Those speculating also mention that, judging by the Nexus 7 monicker which describes the screen size, Nexus 4 could indicate just that.