LG announces G Pro 2 phablet before the Barcelona show, and calls it the successor to the “Best Smartphone of MWC 2013”. Read the details!
Published 13 February 2014, 04:16 EST

As it turns out, that specific February 13 LG invite was indeed for the LG G Pro 2 announcement. LG announces G Pro 2 phablet before the Barcelona show, and calls it the successor to the “Best Smartphone of MWC 2013”. Availability for outside of LG’s home country, as well as pricing, has not yet been announced, and that specific bit is coming at the official MWC LG event.

The LG G Pro 2, pretty much like the rumors (and the manufacturer itself) hinted, features a 5.9-inch Full HD IPS display with 1080 x 1920 resolution and a slim bezel (screen-to-frame ratio of 77.2%), a Qualcomm Snapdragon 800 quad-core processor clocked at 2.26 GHz (aided by the Adreno 330 GPU), and packs 3GB of DDR3 RAM, 16GB and 32GB internal storage options (expandable via microSD card), a 13.0MP optically stabilized camera, 2.1MP webcam, and a 3,200mAh removable battery.

Software-wise, the LG G Pro 2 runs Android 4.4 KitKat, and operation if compatible with LTE and HSPA+ networks (though we’re looking at a Korean version here). Bluetooth 4.0, USB, WiFi a/b/g/n/ac, NFC are all in, and the color options available are Titan, White, and Silver.

The speaker system is a high-power 1W Hi-Fi unit marketed to be 30% louder than its predecessor (with clearer sound and more bass), and unlocking the phone is done by the successor of Knock On, called Knock Code, allowing the user to unlock with “tapping their screens using one of 86,367 “knock” combinations” (two-to-eight taps can be configured anywhere on the screen, whether on or off).

In terms of camera stabilization, the hardware stabilizer is augmented by a software bit, while the sensors and lenses have been, at the same time, increased in size. 4K and 120fps recording capabilities are mentioned, alongside other camera features.

You can find more details at the source below. 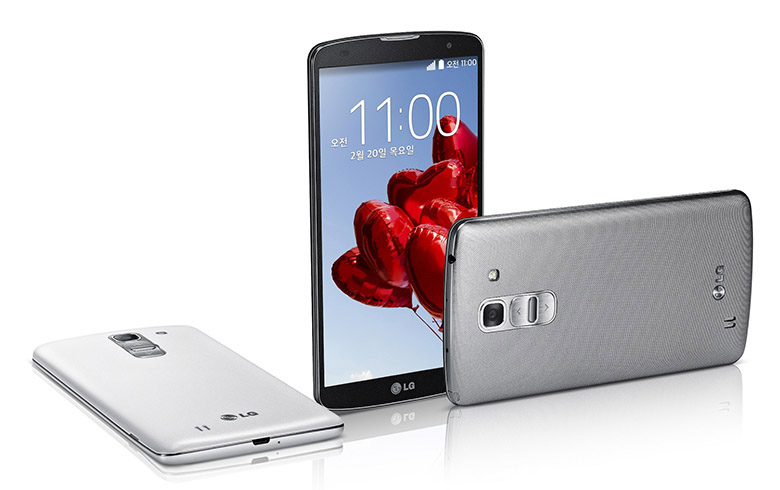 Today’s deals come from Best Buy, Amazon and B&H, where you can find the Google Pixel 3a, Pixel 3a XL, the Samsung Galaxy Watch Active 2 and more on sale