See what the new LG 360 VR is doing so much differently than all the other smartphone VR viewers out there.
Published 21 February 2016, 08:48 EST

When LG started talking about its G5 as a “modular” smartphone, we knew that we were about to meet a lot of new hardware. Beyond the phone’s snap-on modules, we’re also getting to know a couple of external accessories – and with virtual reality as hot as it is right now, it’s little surprise to see LG embracing it with the 360 CAM and 360 VR. Much as the G5 itself does things quite a bit differently than its predecessors, these accessories aren’t your garden variety camera and Cardboard viewer – let’s take a look at exactly what they’re doing to stand out from the pack.

Just as we heard, the 360 VR differs from most smartphone-based VR experiences as it doesn’t rely on a phone’s own screen. Instead, the 360 VR has its own display (with dedicated panels for each eye), and that move for integration lets LG keep the device’s weight way down. As a result, the 360 VR is lightweight enough to be worn like a pair of glasses – no bulky straps here – and even fold up for travel. 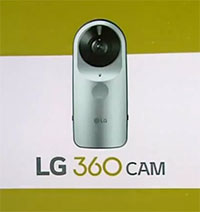 Users will plug the 360 VR into the LG G5 to access 3D content – and yes, right now LG reports the the 360 VR will only function when paired with its new flagship phone.

Of course, a VR solution is only as good so far as you’ve got VR media to view – and to that end, LG is introducing its 360 CAM, a hand-held camera featuring a pair of opposing 13MP sensors, each with a wide-angle lens to capture their side of the action. LG’s prepped the device for use with both YouTube’s 360-degree video offerings, as well as Google StreetView. And of course, you can view your 360 CAM shots on the 360 VR – though a regular smartphone viewer will do in a pinch.