These new Lenovo Yoga 720 and 520 convertibles are pricey, but with good reason

This year’s Mobile World Congress may have wrapped up on a high note for Windows 10 convertibles, with the powerful new Lenovo Yoga 720 and 520.
Published 28 February 2017, 12:01 EST

With all the most exciting MWC 2017 product announcements definitely in our rearview mirror, we’re finally able to take a (short) breath, and give some time in the limelight to a trio of convertible laptops that initially slipped through the cracks.

It was partly Lenovo’s own fault that we didn’t pay much attention to the versatile new Yoga 720 and 520 Windows 10 machines, as the Chinese smartphone and PC-making company flooded the trade show’s exhibition stands with the Moto G5, G5 Plus, an Alexa Moto Mod, affordable Miix 320 detachable, and no less than four Android-powered Tab 4 models.

Compared to all those, the 13 and 15-inch Lenovo Yoga 720, as well as the 14-inch Yoga 520, are way pricier and far less portable. Their keyboards don’t come off, but you can twist and turn them every which way to use in four different modes, including as (chunky) tablets of sorts.

Premium in both appearance and features, the flexible mobile computers are unusually lightweight and thin for their screen sizes, with the 13-inch Yoga 720 standing at 1.3 kg and 14.3 mm respectively, while the Yoga 520 14-incher only ups those numbers to 1.74 kg and 19.9 mm. 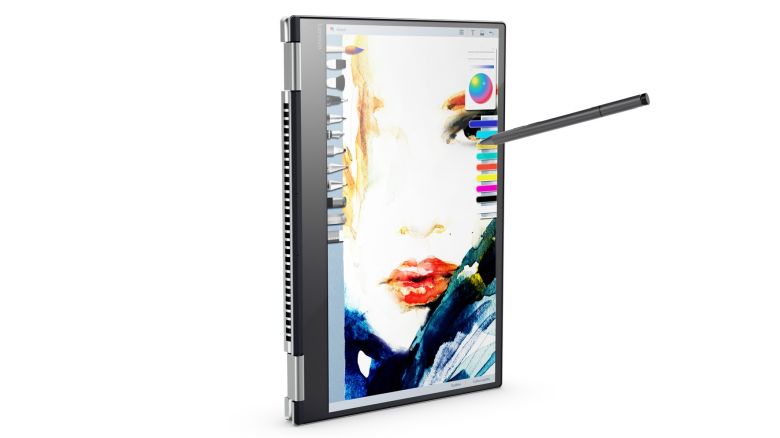 Despite such sleek designs, the two are technically capable of running for up to 9 and 10 hours on a single battery charge in Full HD. The Yoga 720 can always be configured with a 4K UHD display, and you also get Dolby Audio Premium-optimized JBL speakers for superior sound.

Your wish for “best-in-class” performance is granted by packing up to seventh-gen Intel Core i7 processors and even discrete NVIDIA GeForce GTX1050 graphics on the 15-inch Yoga 720. Both the 520 and 720 support an optional active pen for natural note-taking and sketching, with the latter integrating a fingerprint reader as standard, while the former also has the option to add one.