Lenovo hasn’t been particularly successful in the hyper-competitive global smartphone market with either its own mobile devices or those carried over from Motorola, which the Chinese company acquired back in 2014.

But the stagnant PC and tablet industries continue to be kind to a manufacturer that likes to constantly try different things and regularly refresh product lines without fear of confusing its fans.

Needless to stress just how puzzling the new Lenovo Tablet 10 name must feel for people familiar with multiple Tab 10, 8 and 7 generations. Believe it or not, the Tablet 10 actually follows the Miix roster’s software and design suit, with Windows 10 instead of Android as the OS of choice, and a detachable keyboard in tow.

The starting price “will be available shortly”, though it’s pretty obvious this has its sights set on more cash-strapped road warriors than most Miix variants, with Intel Celeron N series processors inside. Then again, an integrated rechargeable pen, fingerprint recognition, discrete Trusted Platform Module technology for “business-class protection” and robust 9-hour battery life should all contribute to a not-so-affordable price point after all. 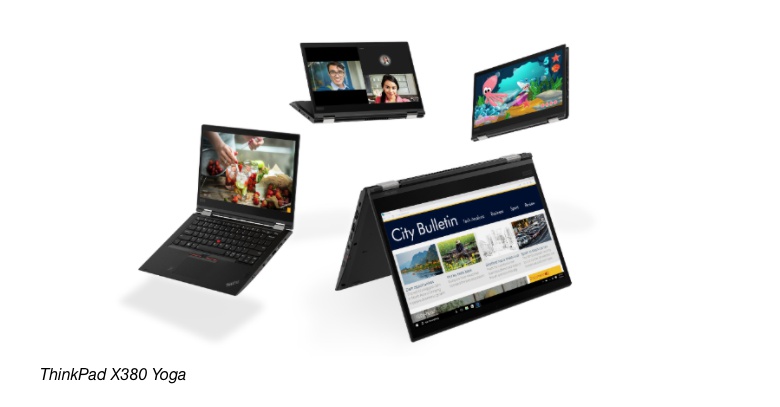 We’ll probably find out more at the actual 2018 Consumer Electronics Show next week in Las Vegas, when Lenovo’s “most complete ThinkPad portfolio” will also get full availability details and specs.

For the time being, we know 8th Generation Intel Core processing power is offered “across the line-up”, along with “broader support of facial recognition for Windows Hello”, “camera security confidence” thanks to a ThinkShutter physical webcam cover, and universal USB Type-C power adapters.

Of the (way too) many upgraded ThinkPad laptops, portability and versatility buffs should be interested most in the X380 Yoga starting at $1,459 later this month with Active Pen, Rapid Charge and Windows Hello technology, and the $549 and up L380 Yoga. All the others are incapable of the most basic type of flexibility, although the $1,269 and up ThinkPad T480s is excitingly billed as “one of the lightest business laptops in its category”, while the T580 optionally supports discrete graphics and UHD display resolution.