Who would have suspected that turning your tablet into a Lego accessory could be so useful – check out this incredible Lego Surface Pro 3 mod.
Published 16 February 2016, 16:51 EST

What is it about the intersection between mobile tech and Lego blocks that works as well as it does? For years now, the tinkerers within us have been building Lego phone accessories like makeshift stands – and more recently, we’ve even seen companies like Google doing the same. There are even efforts to get Lego to make official block sets based on popular smartphone apps. Now one Surface Pro 3 user is taking their love for Lego to the next level, outfitting one of Microsoft’s tablets with a very useful-looking Lego backplate.

Getting the Lego board cut to fit the Surface Pro 3’s back is a little tricky, especially when we’ve got kickstand clearances to deal with, but as you can see here, it’s perfectly doable with a little careful planning. Admittedly, the kickstand doesn’t retain its full range of motion after the Lego treatment, but it still looks pretty usable even after going through this makeover.

With the tablet’s rear covered by a Lego plate, it’s time to start building – and in the case of this project, that means popping on some mobile accessories that have been given the gift of Lego connectivity themselves. That allows a USB hub and its associated devices to be stuck right on the back of the Surface, with Lego holding everything in place.

There’s even a Lego version of the Microsoft logo, bringing the whole transformation together.

Anybody tempted to add a Lego backplate to their own tablet? 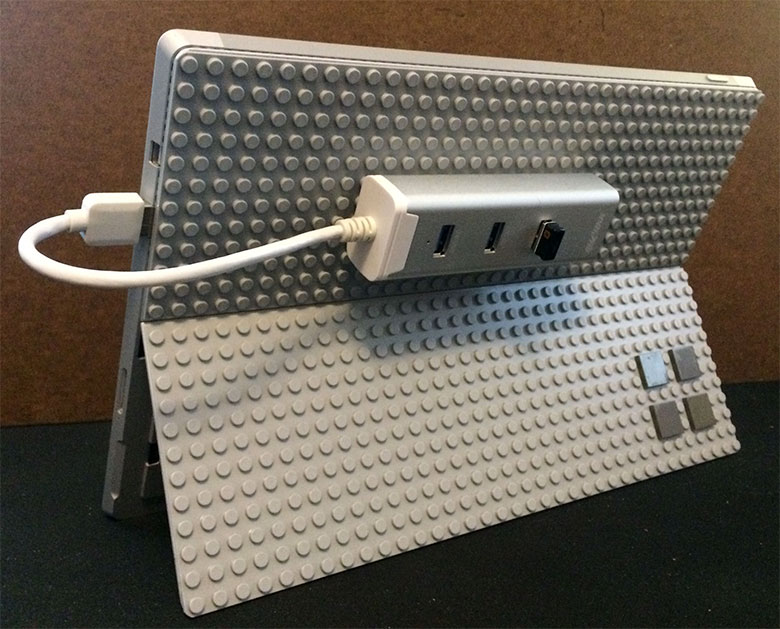