Leave A Message After The Beep: Answering-Machine Apps for Android

I’m a text-message snob, so these days, I don’t get as many phone calls as I used to. Still, they do come in, and some of them are important. Sure, if I have my phone in my hand, I can select “reject with text” and send an SMS to the caller -a stock feature in Android ICS- but what if I’m in the shower or asleep? I hate voicemail. So for those times I’m unreachable, I’d like to have the convenience of a virtual secretary to handle my auto-responses for me.
Published 19 June 2012, 13:10 EDTUpdated 01 April 2021, 09:20 EDT

Last week, I wrote an article laying out my smartphone history, in which I waxed nostalgic about some of the devices and platforms from my past. The idea was to give readers some context for where I’m coming from, device-wise, and it led to a lot of great comments from users who wanted to share their own lists and favorite-device memories.

A side-effect of looking backward over the course of my smartphone-owning life, however, has been a renewed fascination with a few apps from my younger days. Topping the list, this week at least, are those apps which functioned as virtual secretaries. Specifically, I’m talking about an app called “SMS Machine” that I used on my PalmOS devices, which responded to missed phone calls or other notifications with any of a number of predefined text messages.

These days, I don’t get as many phone calls. Some of that I can blame on the changing face of communications; some of it’s probably due to my increasingly evident stance on the matter. It may also have something to do with me not having used a working voicemail greeting in a few months. Still, voice calls do come in, and some of them are important. Sure, if I have my phone in my hand, I can select “reject with text” and send an SMS to the caller- a stock feature in Android ICS. Or I can let a boring old voicemail service handle it … but that’s so twentieth-century. So for those times I’m unreachable, I’d like to have the convenience of a virtual secretary to handle my auto-responses for me. 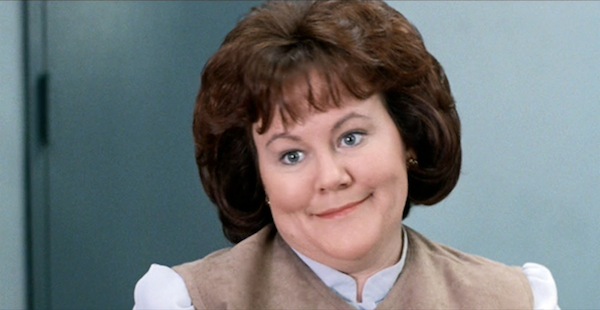 Enter the Google Play Store. Roughly twenty seconds after the idea first came into my head, I’d browsed to the highest-rated apps of the “answering machine” category, selected four that looked promising, and sent them to my phone via the web interface. All were free, and all installed without incident.

The very first thing I noticed was how ugly these apps were. None of them are going to win any awards for iconography or UI design. With the possible exception of Auto SMS, all of them look like rejects from the Android Cupcake School of Design. Also, most are ad-supported; while that’s totally understandable given their gratis price tag, it doesn’t help them in the aesthetic department.

But we didn’t download these apps for their looks. Let’s dive in and check out their functionality. 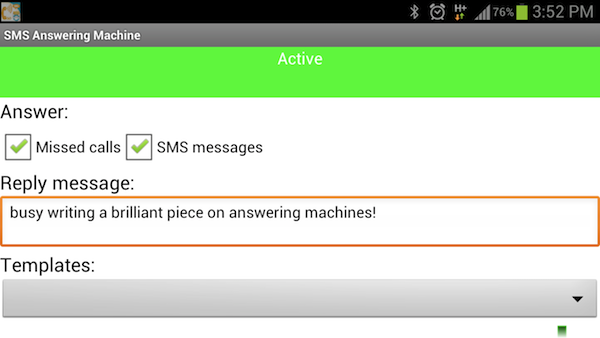 Buried amidst the yellow-ochre and neon green of this app you’ll find some lightweight but straightforward functionality, including the ability to set custom SMS replies, generate reusable templates based on those replies, and control whether missed calls, missed messages, or both trigger the response. There’s also an auto-start feature, in case you always take a meeting or a shower at exactly the same time on a given day.

Diving into the advanced features allows you to add other conditions to who received your auto-response, letting you confine it to people in your address book, not in your address book, or opening it to everyone. You can also set a maximum number of replies to send to any given contact in a set number of hours. Finally, you can forward your missed calls or texts to an email address, though this feature didn’t work for me (probably due to port setting conflicts; not the app’s fault). When forwarding or auto-response is active, a status indicator pops up in the notification bar above- a standard feature for most such apps.

In all, I felt this app struck the best balance between usability and feature set, and it’s the one I’ll probably be using going forward. In that sense, it’s all downhill from here. 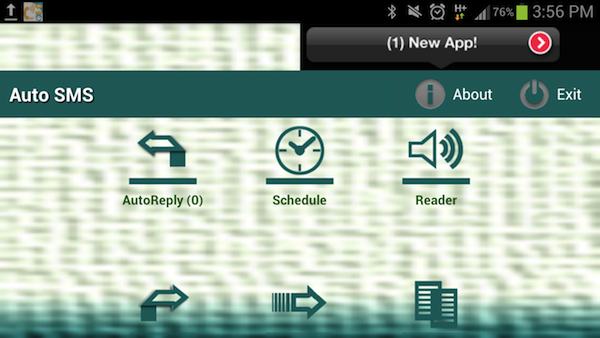 On first launch, Auto SMS hits you with a rather elaborate pop-up warning that it’s not perfect and may not perform well under all conditions. Once you get past this bit of hide-covering by the developer, you’re confronted with the prettiest UI of the apps in this collection. That’s not saying much -the interface looks like it’s printed on the side of a 1988-vintage box of Xerox paper- but at least it’s something. I was later to discover the ability to change the color of the UI, which does help. A bit.

Auto SMS is quite a feature-rich app, even in its free incarnation. The paid version offers a bunch of enhancements, like backup and restore, caller ID announcement, and an ad-free experience, but even without paying a red cent you’re treated to some innovative features. Auto-announcement of incoming messages is one, which reads your text aloud in S-Voice’s monotone stutter. You’re also given the option to send different messages in response to missed-calls and messed-texts, and granular control over when the various auto-response profiles are and aren’t active. Forwarding is available, but only to other phone numbers.

In fact, this app is the most feature-rich of those I tested. The UI is frustrating; to continue the Xerox metaphor, it reminded me of something I’d find on a copy machine from last century. But it didn’t take me too long to learn it, and while I’d probably never love working with it, the added features would more than make up for this defect. If I needed all of them. 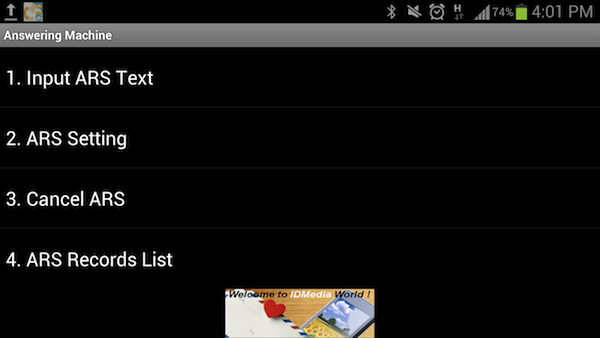 “Answering Machine” is like the knockoff lightsaber you buy your kid for $5 at the county fair. Not the one that breaks five minutes after you buy it, though; the other one. The one that soldiers on like a champ for ten years on the same battery, despite the fact that it cost less than the cotton candy at the booth next door.

The app looks atrocious. The icon is like something out of Beavis & Butthead, text boxes aren’t scalable, there are acronyms which are never explained, and the “Info” button -arguably the most critical component of a dumpster fire like this- is stuck down below the misshapen banner ad, almost falling off the screen at the bezel. There’s no notification icon to show you that it’s running, and what little English explanatory text there is is poorly translated. It looks like the work of a first-year student developer.

That said, it did its job. Once I input my “ARS Text” and pressed the “Choice” button next to that text in “ARS Setting,” it worked splendidly, for both missed calls and missed texts. The missed events were even properly displayed in an “ARS Records List.” There were no scheduling options, no profiles, no forwarding settings … but for a bare-bones answering machine, the app worked just fine. If you’re a function-over-form kind of user who values simplicity, this one will get the job done for you. 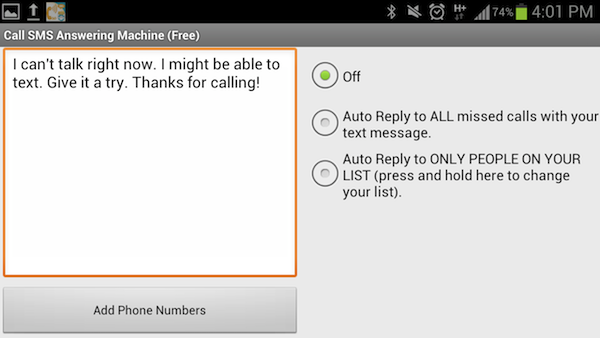 Finally, if it’s just missed calls you’re interested in replying to, “Call SMS Answering” provides a Spartan experience similar to “Answering Machine,” just with a brighter theme and no support for responding to text messages. Purchasing the full version would apparently grant the ability to create a Do Not Respond list and access to the “enhanced” home screen widget, but I can’t see why one would choose to spend money on the full version of such a limited app, when more advanced and user-friendly options exist for free.

As I said, these are only a handful of the available options for answering-machine functionality out there. Though this list was confined to Android -the Galaxy Nexus LTE is my daily driver, and my current test unit is the Galaxy S III- we’ll likely cover similar apps for other platforms in the future. Of course, for Google Voice users like me, these apps fade in usefulness every day as traditional SMS continues its steady march toward irrelevancy, but the end of that road is still a long way off. Plus, the cost of entry to try these out is an an unbeatable zero-point-zero U.S. dollars, so what’ve you got to lose? Give one of the above a spin on your device and see how it feels to have your very own app-based answering service.

Did I miss something? Sure I did. Let me know about it, or share some of your favorite answering-machine apps, in the comments below.

Samsung seems to be preparing an iPad Pro competitor.