It’s still hard to predict if the upcoming Exynos 8895 processor will be faster or slower than the Snapdragon 835, though both look like beasts on paper.
Published 28 December 2016, 12:03 EST

Technically, this is not a Samsung Galaxy S8 leak. And it’s questionable (to say the least) anyway, although we’ll take it, seeing as how these are rather slow news days in anticipation of next week’s onslaught of CES 2017 product announcements from left and right.

Besides, who would go to the trouble of fabricating a specification chart for the upcoming Exynos 8895 processor that isn’t particularly mind-blowing? It’s pretty great, don’t get us wrong, but it feels just realistically unimpressive enough to, well, actually be legit.

Apparently, the newest super-high-end mobile SoC built by Samsung from scratch will cap off at 2.5GHz clock speeds as far as custom-made M2 CPU cores are concerned, not previously rumored 3GHz top velocity. 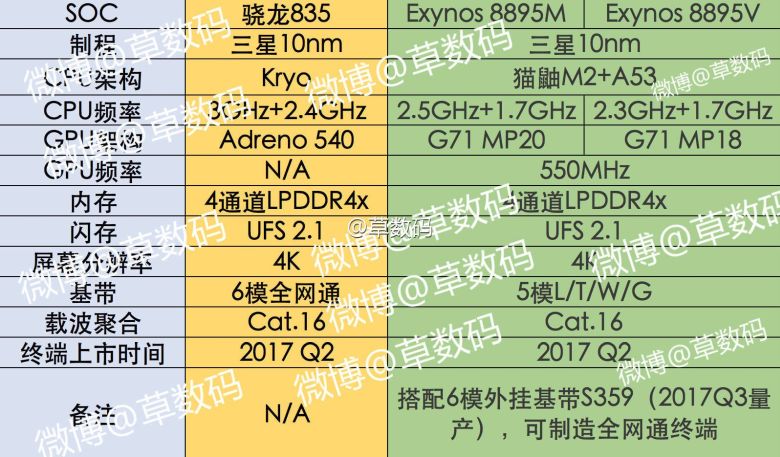 There might be two separate Exynos 8895 chip models in the pipeline (an M and a V version), both combining four M2 nuclei with a lower-power, energy-efficient ARM Cortex A53 quartet. The next-gen Mali-G71 GPU could pack as many as 20 cores, with 550MHz frequency, while most other 8895 features are expected to match the Snapdragon 835’s capabilities.