Kirin 970 chip specs leaked out and, with it, the Huawei Mate 10’s potential

We’ve got new substance for the Mate 10, but how fast and how strong is this silicon? The numbers are here and so is a new set of renders.

More renders of the Huawei Mate 10 are out on Weibo, along with a bench of specifications for the chipset that’s rumored to run inside of it, the Kirin 970. 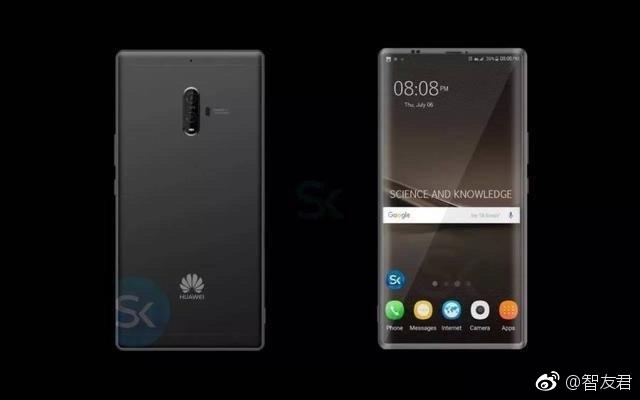 First, to the renders and the continued insistence that the bezels will be painfully minimal on the front side to accommodate the 6-inch 2:1 aspect ratio LCD said to be on the device — previous renders pretty much made the same claim. The display glass curves down to the left and right edges of the device, meeting up with shale-colored metal at the back. A vertically-oriented dual-camera system is up at the top-fourth watermark while the bottom-fourth has the Huawei logo, replete with blooming flower iconography.

There’s only so many ways you can draw up a Mate, we suppose.

Meantime, the Kirin 970, designed by Huawei-owned HiSilicon and produced by TSMC, has been put through tests and a database has popped up with some of its vital specs. It will be configured in a big.LITTLE formation featuring four lower-power Cortex-A53 cores and four stronger Cortex-A73 that can clock a maximum speed of 2.8GHz. It has a Mali-G72 MP8 GPU on-board, LTE Cat. 12 speed potential with dual-SIM capabilities, Bluetooth 4.2 and dual image signal processing for products up to 42 megapixels.

Kirin silicon has had a great track record with us at Pocketnow, but will it really be more powerful than the iPhone 8? we can definitely look forward to the performance of the Mate 10.

The Huawei Mate 10 is set to debut in Munich, Germany, on October 16.

The phones will be launched this week.