The latest Android distribution numbers highlight the ongoing struggles of 6.0 Marshmallow to leave a mark in a world dominated by KitKat and Lollipop.
Published 06 January 2016, 10:39 EST

How many or rather how few Marshmallow-powered devices are there in use today, three whole months after the fresh OS iteration’s release? An exact number is impossible to calculate, but Android 6.0’s market share among only its forerunners remains worryingly low.

Based on Google Play data harvested in the week leading up to January 4, a measly 0.7 percent of active Android phones and tablets run the newest flavor of the world’s most popular mobile platform. The figure is up from both December and November, but imperceptibly so, and it might still be a while until build M surpasses even the ancient G and I.

That’s right, 2.3 Gingerbread and 4.0 Ice Cream Sandwich are incredibly enough alive and well, tallying 3 and 2.7 percent scores several good years on the heels of their commercial debuts. Meanwhile, 2.2 Froyo refuses to once and for all slip into absolute oblivion, clinging to 0.2 percent January distribution, whereas Jelly Bean keeps falling, but perhaps not at the rapid pace some would expect. 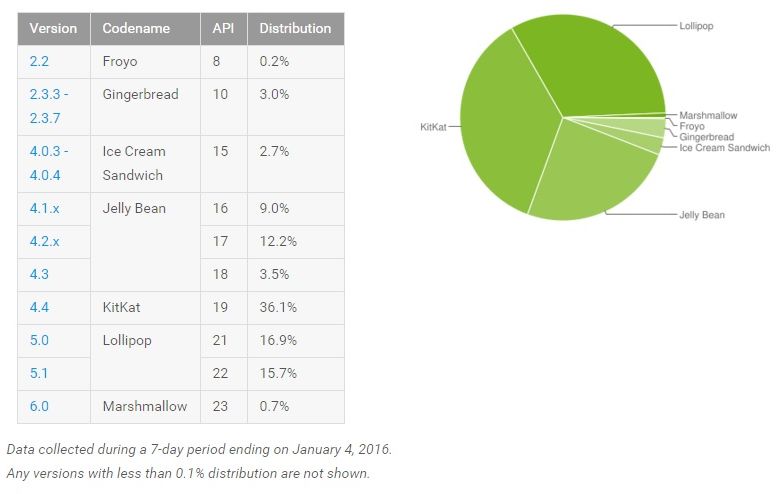 Any forecasts as to when will Lollipop beat KitKat? It’s hard to say precisely, but it shouldn’t take more than a couple of months. Unfortunately, we can’t predict the same for Marshmallow’s rise to 10 or even 5 percent.