It Is Now Pitch Dark. You Are Likely To Be Eaten By A Grue.

Zork. Colossal Cave. Planetfall. Infocom! A few developers have seized on the opportunity to bring text adventure gaming back into the limelight via smartphones. In some cases, they’ve done this by catering to the nostalgia of users like me, writing interpreter apps that can run decades-old classics like Planetfall on modern smartphones. Other development houses have sprung up to deliver entirely new content, sometimes in the traditional interactive-fiction format and sometimes in others.
Published 12 June 2012, 13:14 EDT

As a child, I had no use for organized sports. Though this was somewhat detrimental to my early social development, it at least ensured I had plenty of free time on after-school afternoons. Often, I’d get off the school bus early and spend the waning hours of daylight at the public library, in front of an Apple IIe. That’s where I discovered interactive fiction, or text adventures.

Those terms will be instantly familiar to most people who grew up amid the whirring of floppy drives, but they’ll seem completely foreign to younger users. For them, I offer the following brief description: Interactive fiction is a game genre containing little or no graphics, where the player interacts with the game via text input. The game uses rich textual detail to describe what’s happening in the playing environment, and the player guides his character through that environment with text input- usually directional commands and simple verb-noun sentences, like “walk north, take lantern.” It’s like a novel you can control.

If you’re early-80s Matthew Broderick, these games can get you into some trouble.

I grew up on text adventure classics like Colossal Cave and Zork, which were written in the late 1970s by members of the Dynamic Modeling Group at MIT. Later, some of those folks went on to form Infocom, a company which would define the genre for years and whose name is still associated with top-shelf interactive fiction today, years after its demise. It takes very effective storytelling and intelligent game design to achieve that kind of lasting prominence, and much interactive fiction includes both. In fact, thanks to one particularly emotional scene in Infocom’s Planetfall, the company received an abundance of fan mail, some including confessions of users openly weeping at their computers.

Of course, I wouldn’t know anything about that.

Anyway, as my youthful years passed, I found myself drifting further from the library’s Apple IIe and using more advanced machines, but text adventures stayed very close to my heart even as their popularity waned. As computer technology matured, graphically rich games gained popularity, nudging out their text-centric progenitors. “Graphical text adventures” were born in this period, a sort of hybrid category where the text-based manipulation was augmented by crude animated material. During the days of DOS 6.2 and Windows 3.1, I latched on to a few of these, especially the Hugo’s House of Horrors series. 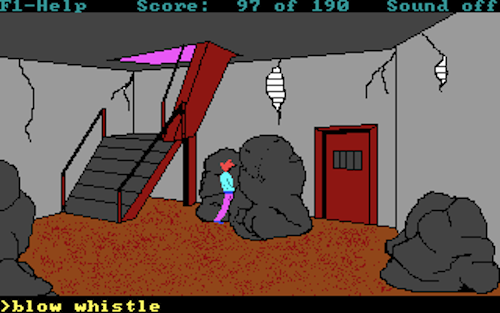 As the passage of time eased us all into the “post-PC era,” much of my gaming switched over to mobile. There were crude text-based games available for Java-powered dumbphones –Dope Wars is a good example- and it’s easy to see why: mobile game development followed in the footsteps of its larger predecessor. The limited power and performance of early mobile phones put constraints on what a mobile game could do, and lightweight text-based games were a perfect fit for the underpowered devices.

As smartphones came into prominence, their added speed, memory, and on-device app stores paved the way for more ambitious graphically-based games. Today, high-quality games of every description and incredible detail can be found on every major smartphone platform. In their wake, text adventures have fallen by the wayside. 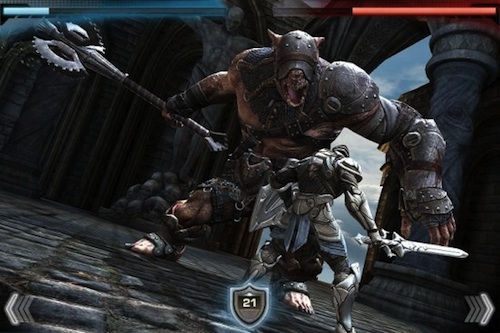 Pictured: not a text adventure.

Fortunately, a few developers have seized on the opportunity to bring non-graphically-oriented gaming back into the limelight. In some cases, they’ve done this by catering to the nostalgia of users like me, writing interpreter apps that can run decades-old classics like Planetfall on modern smartphones. Other development houses have sprung up to deliver entirely new content, sometimes in the traditional format and sometimes in others.

I recently took a plunge into the Google Play store to see what was available in today’s world of mobile text-based games. Since I carry a Galaxy Nexus, my search was confined to Android, but equivalents to some of these titles exist on other platforms. After playing many text adventures on my phone over the past few weeks, clacking away on my virtual keyboard and chuckling to myself on the train, I’ve come away with two highlights. 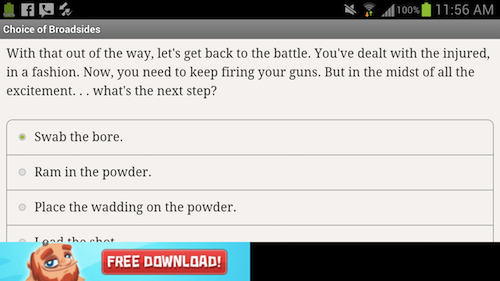 If you remember Choose-Your-Own-Adventure books from your childhood, you’ll be familiar with the format of every Choice-Of game out there. The small development house has published six games so far, each one simple in format but wonderfully immersive in its construction. Instead of typing in commands to direct the game, as with earlier text adventures, you’re given a list of choices after every scenario. Selecting one moves the game forward, and the narrative changes accordingly.

The games span several different genres. Choice of Broadsides, my favorite, places you in a Master & Commander-esque world of sailing and swashbuckling, struggling to advance your career without losing your honor (or your life). It’s not all work, though, as the game is broad enough to allow you time to socialize and even settle down with a spouse, should you so desire it- and if your skills allow for it. How much you can accomplish depends on a graph of your abilities which you help build early in the game by answering a few questions. The game reminds you that you’ll do better if you stick to choices that play to your abilities.

If sailing isn’t waving your flag, you can delve into the gothic world of blood-sucking in Choice of the Vampire, test your skills at high-court socialization in Choice of Romance, or even see how you fare as a flying fire-breather in Choice of the Dragon. The games are all exceedingly well-written, the worlds they create immersive and engaging. It was hard to put the phone down after my last playthrough of “Broadsides,” which calls to mind my only real complaint about the Choice-Of titles: sometimes, they’re too short.

According to the company’s website, Choice Of Games apps are available on Android, iOS, the Amazon App Store, and the Palm App Catalog. Demo versions on Android are free and fully-playable, but they’re ad-supported and include a replay time limit. Titles range in price from $1.99 to $4.99, but can also be played on the company’s website. Finally, for any budding writers out there, they’re searching for new authors. A link to the Choice Of Games site can be found at the bottom of this article. 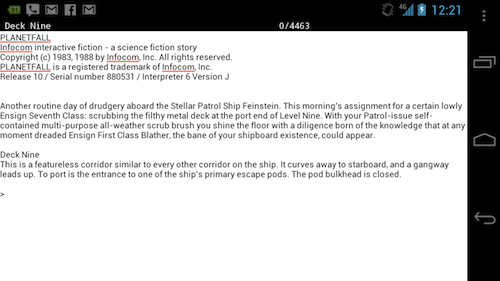 Across the style gap sits Twisty, an app that brings classic text adventure titles to Android phones. Twisty is an “interpreter,” incorporating support for the Z-Machine standard that Infocom pioneered for its text adventures. The Inform website describes the standard as “possibly the most portable virtual machine ever created, meaning that programs generated using Inform can be easily run on machines ranging from the Commodore 64 to the latest Mac OS X system, from the lowliest handheld to the highest-end workstation.”

Though Twisty comes bundled with a handful of games, its real power lies in its ability to run almost any classic text adventure. Public-domain or free titles, which are still being written to this day, can be downloaded in their special .zx formats from sites like the Interactive Fiction Database. Other websites exist that traffic in non-sanctioned software, such as the old Infocom titles that, though they’re not currently offered for sale, are still not public domain.

Twisty itself runs reasonably well on both my Galaxy Nexus and Galaxy S III, though it’s not without its stumbles: the product page in the Google Play Store warns users upfront that Twisty is “open source with known bugs,” and I’ve experienced a few crashes in my short time with it. Fortunately, the app is free, as are most of the titles available to play, so there’s very little reason not to give it a shot.

Especially if you’re someone like me, who grew up playing text adventures, you owe it to yourself to give either or both of the above a try. It’s quite a thrill to play Planetfall on your smartphone, over breakfast at the local diner, and you might do better than you did as a kid.

You’ll just want to head home before the sad parts start. No sense crying in your eggs.

You feel a strong urge to share tales of your favorite text adventure app or interpreter for your platform. Or you may have some fond memories of interactive fiction to share with the group; it’s impossible to be certain. You feel an inexplicable desire to drop your comments in the section below.

Samsung is replacing the Exynos 990 processor inside the 4G version of Galaxy S20 FE with the Qualcomm Snapdragon 865 SoC.