Is The New TouchWiz Better Than The New HTC Sense?

Before I picked up the HTC One X and the Samsung Galaxy S III, I was a firm believer in the power of stock Android, and the folly of skins. After some time with HTC Sense and TouchWiz, though, I’m starting to waver.
Published 08 June 2012, 13:59 EDT

For as long as manufacturers have put skins on Android, tech geeks have argued over their usefulness.

Custom UI layers on top of older OSes like Windows Mobile -and even earlier versions of Android- enjoyed a less-criticized existence. Often, their interface and usability tweaks were seen as enhancements, filling gaps in functionality that the underlying OS had left open. I remember being relieved to discover, in the summer of 2010, that my next Android phone -the then-new HTC Evo 4G- was shipping with HTC Sense. To my eye, Sense looked and worked better than stock Froyo, and I still had residual warm’n’fuzzy memories from my days using Sense on Windows Mobile.

Times changed, though. As the months wore on, software makers that had traditionally focused on function over form grew to appreciate the power of a well-designed user interface. The most striking example of this shift was Microsoft’s ditching WinMo for WP7’s Metro UI. Google wasn’t far behind, though, with its shift from Gingerbread through intermediate Honeycomb into Ice Cream Sandwich late last year. Suddenly, Android wasn’t just usable; it was enjoyable. It made sense. There was a cohesive, unified design statement tying (mostly) everything about the interface together. 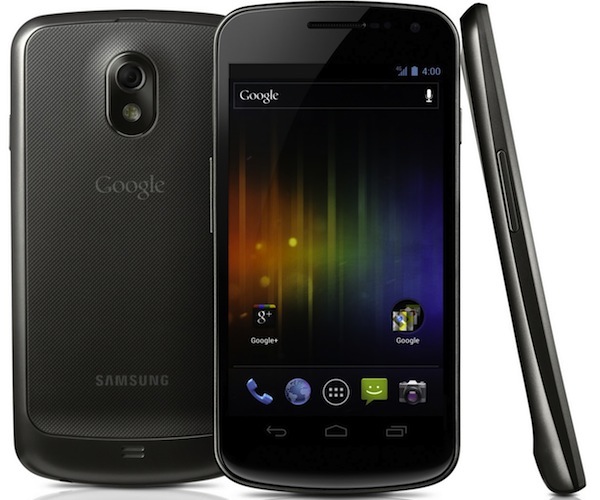 By that time, UI skins on Android had already lost much of their lustre. Their heavy-handed modifications to operating systems were increasingly seen as meddling for the sake of differentiation, rather than providing needed functionality. The artistic flair that once buffed up ho-hum user interfaces was getting out of control: Samsung’s TouchWiz layer tended to make every one of its Android phones look like it was running a cheap iOS knock-off, and HTC’s Sense 3.0 went off the deep end with crazy 3D carousel home-screen shufflers and flying weather animations right out of a flight simulator.

It’s never been clear to me what (or whether) regular users think about skins. I’m sure there’s a ton of focus group data out there somewhere that helps OEMs understand what the average Joe thinks about their UI designs. But where the everyman’s voice was silent, the geek world’s wasn’t; tech writers, bloggers, and enthusiasts spent months, then years gradually rebelling against the steady encroachment of skins on their “pure” Android experience. “Skin” became a dirty word, helping drive the Nexus line to higher levels of popularity and giving the software departments inside HTC and Samsung pause.

There’s no source link for that last bit, of course, but it’s not really needed. One needs only to look at the latest iterations of Sense and TouchWiz to see how much has changed over a point release. In each case, the skins have been scaled way back. 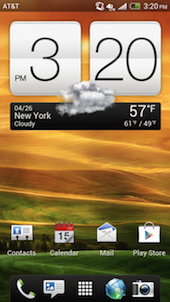 I briefly discussed the new HTC Sense in my review of the AT&T HTC One X. Overall, I liked what HTC had done:

Generally speaking, I find that skins tend to slow everything down, mess with features I like, and “ugly everything up.” Some of that continues to ring true for HTC’s new version of Sense, 4.0, but it’s all been toned down quite a bit. Even though it still touches almost every part of Android, it’s much lighter than its predecessors. AT&T told me that HTC’s aim with this latest iteration of Sense was to add features it thought would be useful, but to leave intact as much as possible about what’s great in stock Android ICS. And in large part, they’ve succeeded.

In particular, I called out Sense’s new card-based “task switcher,” which I felt improved upon the stock ICS multitasking experience in both design and responsiveness. The depth of personalization and the UI tweaks also earned praise in the new version of the skin; where before they’d been prime examples of heavyweight, stutter-inducing cruft, now these modifications were light, almost-subtle tweaks that were useful more often than they got in the way. Sense had returned to its roots.

Of course, it wasn’t perfect; there was still stutter and lag from time to time, and many of the included widgets, though toned down, were still ugly. There was also a curious overabundance of options in areas like “skins” and “themes” – two features that could easily be blended into a single offering with a more streamlined approach. Finally, I found the Sense keyboard to be a disaster, and quickly replaced it with a stock-ICS version.

So while Sense was a mixed bag, it had a lot more going for it than any previous skin I’d used, and I agreed with the commonly held sentiment that it was certainly the best version of Sense yet. More than that, though, it was the first time in a long while -maybe ever- that I bought into a manufacturer’s implied assertion that this phone was theirs, and I was getting a specially-crafted experience. It was the first time I believed HTC when it said “hey, this isn’t an Android phone; this is an HTC phone. And it’s better for it.” 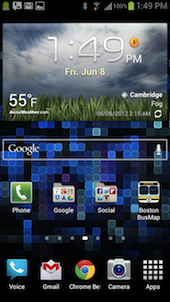 When I heard the new Samsung Galaxy S III was going to launch with TouchWiz, I was both crestfallen and totally unsurprised. I’d never owned a device running Samsung’s distinctive UI layer, but I’d had enough experience on demo phones and tablets to know that I hated it. To my eyes, TouchWiz made every UI element look like a blown-out cartoon version of itself, with overdone borders and unnecessarily-bright colors, and a lot of curvy colored backdrops where they didn’t need to be- like behind icons. The widgets followed this same questionable design path, and the skin seemed to slow even powerful hardware to a crawl at times. In my Galaxy Nexus vs. Samsung Galaxy S III comparison video, I called TouchWiz bombastic and showy, equating it with “that guy in the club wearing all the gold bracelets.” I don’t know that guy, but I don’t really ever want to.

So when Samsung presented the latest TouchWiz 5.0 -called “Nature UX”- as a fresh new take on its skin approach, I was skeptical. To me, it looked a lot like the old TouchWiz, with a lot of faux-natural pieces of cruft glued on. All the water ripples and droplet noises layered on top of a watered-down (pardon the pun) UI layer seemed silly.

And you know what? It is. The sounds of dribbling water and dew-drop notifications belong on the Galaxy S III about as much as a hamster belongs at the helm of a submarine. If that analogy seems forced, it’s nothing compared to the concept Samsung’s trying to shoehorn into the Galaxy S III with its “polished river stone” business- something we’ve seen executed better, with much more subtlety, in devices like the Palm Pre. Failed product though it was, at least the Pre presented a unified design concept that didn’t seem grafted on.

So my impression after the Galaxy S III announcement was that the “Nature UX” elements were clumsy tack-ons, and mixed in with that was a years-long disdain for all things TouchWiz. So when the phone arrived at my door, it was entering a snake pit of lowered expectations.

As you might expect from such an elaborate setup, I ended up really liking it.

After only a few minutes of use, I was floored by how much of the good stuff from stock ICS was retained, and how much useful material TouchWiz had added. The app launcher and home screens, aside from the understated dot row down below, were quite close to stock. Swipe-to-dismiss was alive and well in the notification drawer, and a helpful row of toggles within provided for on-the-fly adjustments to the phone’s radios and profiles. The multitasking view was right out of stock 4.0, the only additions a “remove all” button and a handy shortcut to the task manager. Many of the new TouchWiz widgets were toned down. Some, like S Planner and S Memo, were actually attractive and useful. 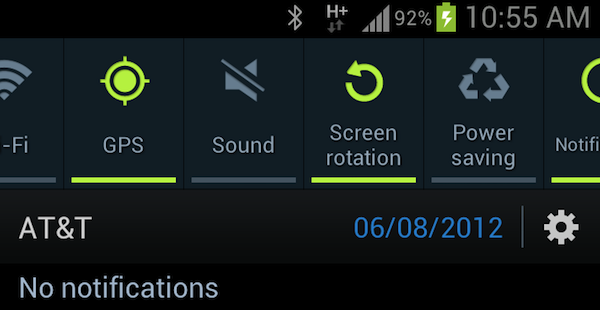 And speaking of usefulness, Samsung has really gone deep with both feature enhancements and the tutorials to teach you how to use them. Motion-activated panning, special gestures, S Voice, advanced power-saving features, custom fonts, Smart Stay … there’s a massive collection of features bundled with the Galaxy S III’s version of Android. And more often than not, tapping on one of them in a menu will call up a handy how to, a mini-“readme” file with animations and a quick summation of the feature’s functionality, so you can decide whether or not it’s worth your time. Sure, sometimes the English is a little broken in these tutorials, and some of the features are more show than substance, but they’re not just bloatware. Many users will find them welcome and fun additions to the Android experience. I certainly did.

Best of all: thanks to the beefy hardware of the Galaxy S III, TouchWiz doesn’t slow the phone down at all. Even watching a Pop Up Play video on top of a graphically intense web page, the device flies.

The keyboard is still horrible -it actually makes me long for the keyboard on the One X, which I also hated- but you can’t win them all. 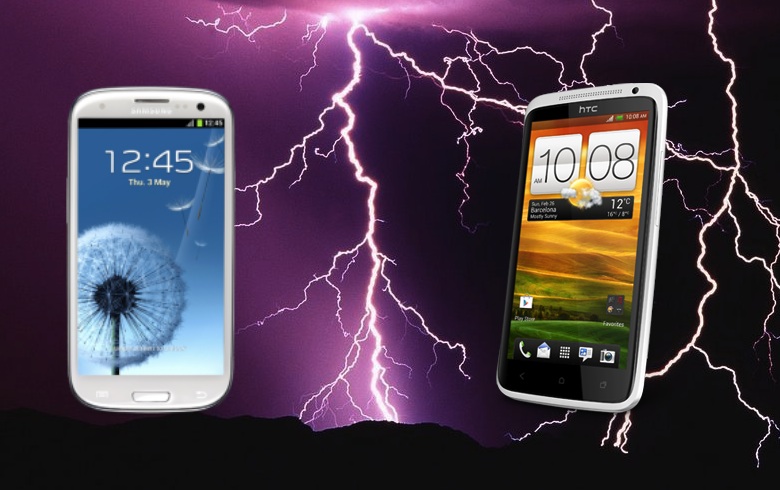 Before I picked up the Galaxy S III, I was a firm believer in the power of stock Android, and the folly of skins. HTC’s Sense 4.0 softened me on that stance a bit, and I still think that, of the two, it’s the more aesthetically pleasing; TouchWiz still has vaguely cartoon-y overtones that gives it a slightly juvenile feel next to HTC’s refined Sense.

But Sense, to me, was often still an obstacle to getting what I wanted from Android. A pretty one, but an obstacle nonetheless. By contrast, TouchWiz has -unbelievably- made my experience with Android better on the Galaxy S III. Yes, it’s tackier, and it feels like kid gloves at times, but it’s so packed with features and user-friendly dialogs that, like an intrusive but super-friendly dog, I can’t help but like it. And it runs like butter.

Your experience will vary, as always; I’m not saying TouchWiz will be the best choice for all users. And honestly, I still prefer stock ICS. But if I had to pick a skinned version of Android … well, I can barely believe I’m writing it, but:

TouchWiz 5 is the better skin for me.

What do you think? Do I have blood fever? Am I just drunk with love for a new device and hallucinating? Or have you been waiting for someone to come out and say this first? What’s the better skin for you, and why? You know where to continue the discussion.

The rest of the cameras include an 8MP wide-angle lens, a 5MP macro shooter, and 2MP portrait camera.