Will novelty be enough for the new Jolla smartphone?

The former Nokians at Jolla have announced their first Sailfish-powered smartphone. Does it offer enough for you to consider switching from Android or iOS?

At this point, longtime readers of Pocketnow should be familiar with Jolla. We’ve taken every opportunity to write about the outfit over the course of the past year, for a few reasons. Part of our interest lies in the company’s roots: it was founded by a group of ex-Nokians who decided the all-Windows Phone route wasn’t the one for them. We love underdogs and smaller ventures, precisely because of the spunk and dedication it takes to make such a move. The software driving the company’s smartphone effort is also intriguing: it may be called Sailfish today, but its roots lie in MeeGo, a platform that in an alternate reality would have served as Nokia’s foundation for a new generation of phone-making. So the new Jolla smartphone, announced just this week, is interesting to us on several levels.

We’ve talked to lots of folks at Jolla. In February, we interviewed the company’s then-CIO Stefano Mosconi, who painted a broad picture of what the new company was about. We followed that up with a video from MWC 2013 wherein Stefano, newly minted CTO of Jolla, took us on a tour of the Sailfish OS and answered some questions about the newly-introduced SDK.

We weren’t able to make it to Helsinki for the official unveiling on Monday (we were busy learning about disaster recovery instead), but we did have the opportunity to speak to Jolla co-founder and software head Marc Dillon about the company’s news. Our own Taylor Martin waxed poetic about the potential of “the other side” in an editorial on Tuesday, and we’re planning even more coverage in the form of a special-edition Pocketnow Weekly podcast later this week.

The reason for all this pontificating goes beyond admiration for the doggedness of a new smartphone contender, or whimsy at the notion of a modern platform built on the foundation of the once-promising MeeGo. The core, the kernel of our fascination with Jolla -and I think this goes for some of you as well- is the potential it brings for a truly new user experience.

We see fatigue all across the consumer electronics space: people tiring of the same old hardware, the same old OS. This is part of the reason smartphone platforms continue to grow; it’s not just graduates from Dumbphone University, but switchers from other ecosystems who grew tired of their familiar UX. And Jolla is counting on that fatigue to fuel the growth of its community. As Marc Dillon said in our interview:

A valid point, to be sure, and one I personally sympathize with. The unavoidable question then arises, though: is that enough? Is a new user experience the golden ticket to success? In short: is novelty sufficient?

Don’t take me wrong: I’m not calling Jolla trivial, by any means. The company has accomplished quite a bit in a very short time, and its first product, while vague in terms of specs, is certainly intriguing. In particular, I love the idea of a detachable and customizable module – the “other half” that Taylor Martin so yearns for in his editorial linked above. For ages, we’ve bemoaned the demise of the humble flip phone, hoping against hope that a manufacturer would come along to revive the golden years of hardware diversity that little touches like push-to-flip buttons injected into our gadget world. The current state of that world is pretty static, and so the notion of customizable hardware mated to intelligent software that reacts to it is quite seductive indeed.

There’s more to Jolla’s new flagship, of course; as we saw in the software tour, the Sailfish UI is quite beautiful and well-organized, with cool-looking gestures and a strong vertical concept that’s alluring in its consistency. “Ambience” alone is quite a lovely aesthetic touch. Then there’s the attraction of the “community” element – not just the promise of an open-source development environment, but the notion that by pre-ordering or even considering Jolla, you’re part of a select group of folks on the bleeding edge of new and experimental smartphone design.

All that’s well and good – personally, it conjures up memories of the heady days of webOS, my one and only experience as a fanboy. But some might say it’s shaky ground on which to build a new platform. Again, will “new” and “open” and “innovative” really be sufficient to turn enough heads to propel Jolla to relevancy? 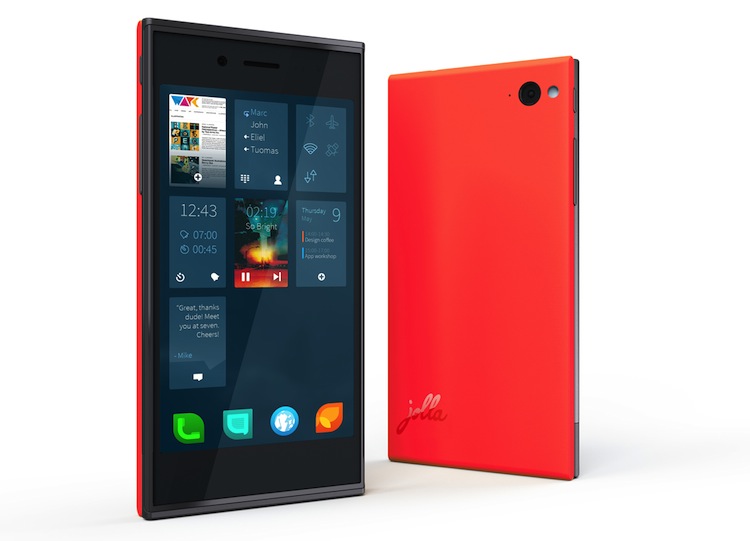 We won’t know for sure until we’re able to review the company’s first smartphone, something we’re very excited to do. And, frankly, we hope the outfit does succeed – not just because of the old adage that more competition equals better products for everyone, and not just because we want our Jolla T-shirts to appreciate in value, either. We want to see Jolla flourish because -from what we’ve seen so far- it deserves to. Sailfish really is pretty, and fresh, and intelligent, and all the things the marketing copy says it is.

We just hope the company can find enough customers who agree that that, in and of itself, can be enough to justify the jump to Jolla. If not, it’ll have to start directing its self-promotion efforts to other advantages Sailfish offers … advantages that will need to be quite compelling to keep the nascent platform afloat. Advantages we’re looking forward to discovering as the “Jolla phone” makes its way to store shelves later in the year.