An iPhone XS Max explodes in a man’s back pocket, according to a recent report. Check out the story and the pictures attached.
Published 29 December 2018, 10:00 EST

The topic of exploding phones seems to be a trending one, regardless if we’re talking about Android devices or iPhones. It all started with the Note7, and it’s been on and off the headlines. An iPhone X allegedly exploded after an iOS update, and that’s the last we heard a story involving a phone doing something it’s not supposed to. Now a man claims that his brand new iPhone XS Max simply exploded while in his pocket.

The person is being referred to as J. Hillard, and he sent in a report, accompanied by pictures, to iDrop News, who broke the story exclusively. It all allegedly happened on December 12, 2018, around 3 P.M., somewhere near Columbus, Ohio. A strange smell came out of his back pocket, where the phone allegedly was, and, at the same time, he claims to have felt a “large amount of heat” burning his skin. Moments later green and yellow smoke came out of the iPhone.

Left no other option, I had to exit the room since there was a female in the break room with me and remove my pants. I ran to the boardroom where I got my shoes and pants off as fast as possible. A VP of our company put the fire out with a fire extinguisher because he heard me yelling.

After taking the phone in at an Apple Store, a replacement unit was offered only in return of the damaged phone, which was supposed to end up with the “engineering team”. Hillard didn’t accept the situation and took his burned phone back home from where he called Apple Care.

Hit the source link to read the entire story, which ends up with Hillard asking for “restitution for the clothes and shoes ruined in the incident, as well as costs to cover his wireless service which he was unable to use during his time negotiating with Apple”. 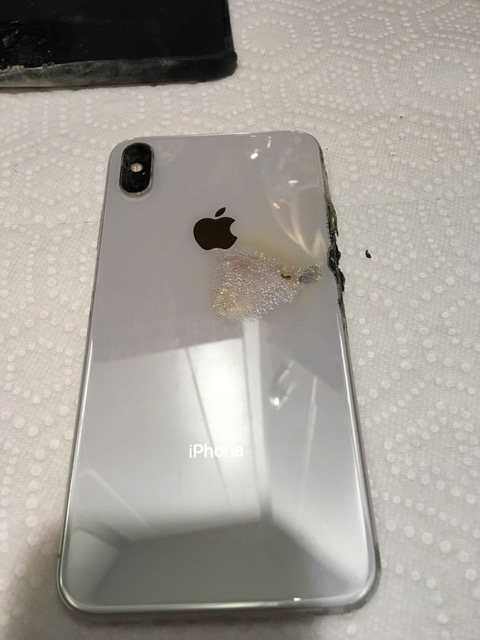