Apple seems to have employed some seriously unique engineering magic to keep the iPhone X logic board compact and crammed with innovative components.

If you just got home from a week-long stint in line at the local Apple Store, proud and excited about owning the hot new iPhone X before (almost) everyone else, and you’re now thinking of taking a look under the hood, maybe stop and reconsider.

We’re all curious to check out the presumably groundbreaking internals of arguably the most radically redesigned iPhone in… ages, but it’s wise to leave the teardown treatment to the professionals. After all, Apple has never been too fond of the modular handset construction method.

The iPhone X is obviously no exception, complicating certain repairs you might be inclined to try at home with intricate waterproofing measures. Replacing numerous small components is outright impossible if you don’t want to swap entire assemblies tying together unrelated parts. And then you have double last year’s glass, which significantly improves the likelihood of major drop damage.

It’s also a pretty big pain in the behind to attempt a glass back replacement without destroying other costly components, and yet the iPhone X scores a decent 6 points (out of 10) for repairability. That’s largely because the display and battery remain relatively easy to swap out on their own for a DIY specialist. 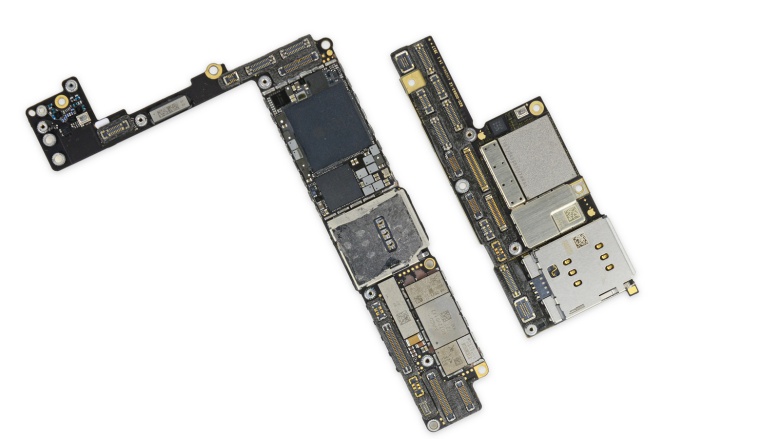 What you may be more interested in however is the rare feat of shrinking the iPhone 8’s logic board without cutting any performance corners. In fact, this incredibly dense motherboard holds more chips and magical little components than its “cousin” in just 70 percent of the footprint.

That’s quite an engineering achievement, and it wouldn’t have been possible without “folding the board in half.” You’re looking at a so-called “double-stacked board” here, with all kinds of circuits and connectors distributed in plain sight, as well as hidden on the back of the phone’s “brain.”

Last but not least, it’s definitely worth highlighting that the iPhone X is the first of its kind with not one, but two battery cells in tow. The L-shaped energy container doesn’t hold an insane amount of juice, but the total 2716 mAh capacity is still a hair better than the 8 Plus figure. And the thick-bezeled 5.5-incher is overall taller, wider and heavier than the “all-screen” 5.8-incher.