iPhone prices are dropping, it’s a great time to buy one

With iPhone prices dropping, we have already told you when it was a great time to sell your used iPhone for the most money. That happened last month, before Apple made the date of its annual iPhone event public. Tim Cook should take the stage next week, on September 12, to unveil the highly anticipated 2018 iPhone models.

We care about the buyers too, not just the sellers, so we’re telling you that now it is a great time to buy an iPhone. That’s because this period of the year brings you the best prices for both new and used iPhones. That, of course if you don’t mind being one or two generations behind and can resist the temptation to buy the latest and greatest.

Apple has been historically discounting the prices of previous generation iPhones after the new models have been announced. So, if you’re planning on buying from Apple, expect the 2017 iPhones to be available, officially, for $100 or so cheaper. That’s going to happen shortly after the event, so the month of September is the one to watch out for.

What if you want to buy a brand-new iPhone, but not from Apple? Or even a used one? Swappa is the perfect place to do it. You will find iPhones that are brand-new, as well as used ones in mint condition, for very attractive prices.

As a matter of fact, the guys at Swappa have been closely watching the market and the prices. They have it on good authority that iPhone prices are plummeting the first three months after their introduction. Then they’re pretty much level with the arrival of the Holiday Season and shopping frenzy, after which they are steadily declining again. iPhone prices reach the lowest point right before the introduction of the successors. Which is now. Check out the chart below to see what we’re talking about. 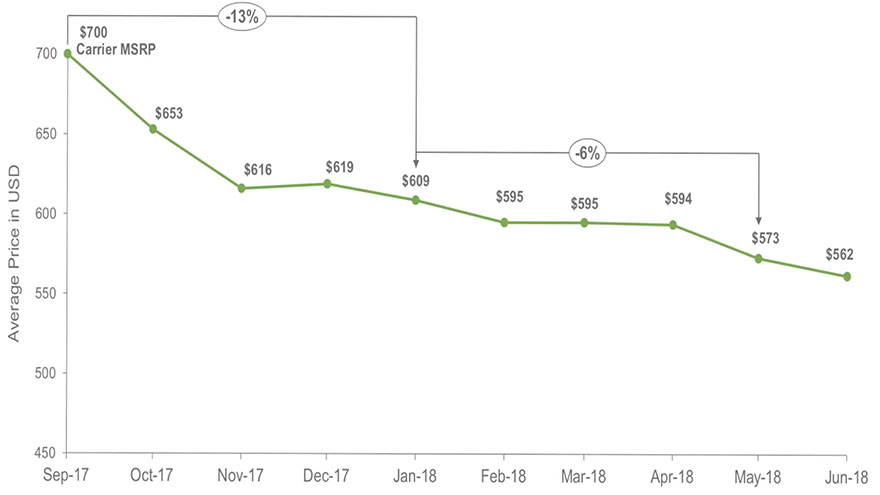 Once we’ve come full circle (an entire yearly iPhone release cycle), everything repeats itself. So, whether you want to buy a brand-new Apple phone, or a used one, you now have everything you need to know about the best iPhone prices, when to buy, and when to sell

We thank Swappa for sponsoring this article!

Samsung Galaxy F41 will be sold at an introductory price of Rs. 15,499 (~ $211), which is actually quite a compelling offer for the package.

Today's deals come from Amazon, Best Buy and B&H, where we find the latest MacBook Air,…

Apple Music TV will witness the debut of exclusive content every Friday, but it is…