Stats and figures have been running thick these past several days. Earlier today, we had some quarter-to-quarter smartphone shipment numbers from TrendForce that took some wind out of the two biggest players in the industry, Samsung and Apple. But before that, we had a larger-scale OS market share report that kept the iPhone in terrific universal standing (and likely on more nightstands).

This past weekend brought in some fresh digits from Morgan Stanley (specifically, the financial firm’s Apple analyst, Katy Huberty) to back that bigger claim up.

We obtained several graphs from the survey for free via our secondary sources. One is a US survey of smartphone ownership over time. We don’t have the privilege of context from what was asked in the survey, the size of the survey and characteristics of survey participants, among other parameters.

Our first chart is about which brand of smartphone consumers have owned over the course of a year and seven months. 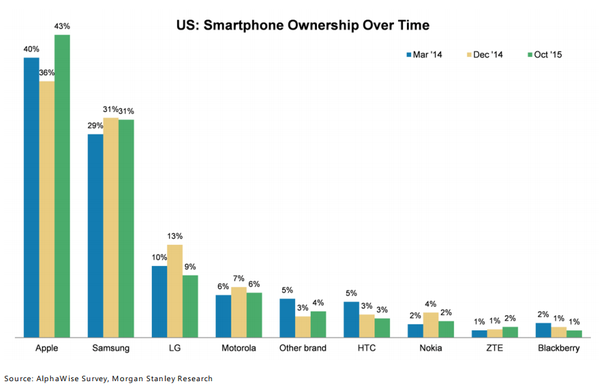 The most popular smartphone to have by far is the iPhone — the 43 percent figure beats out both previous survey results.

Out of the seven other named brands on the x-axis, only one saw growth between December 2014 and this month: ZTE. Four of them beat their March 2014 appraisals.

Another graph from the survey samples the Chinese’s brand interest for their next smartphone purchase. These are consumer sentiment figures that have no relation to real units. 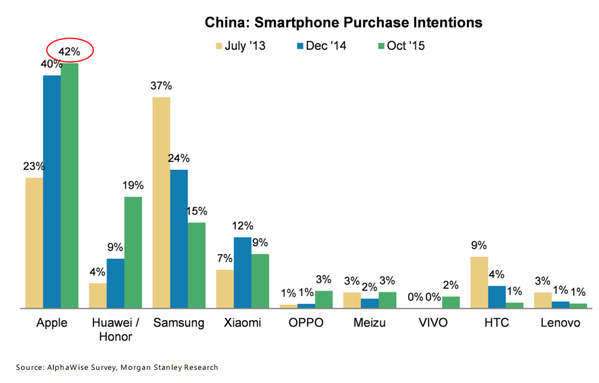 While “peak Apple” might be occurring here, check out the cratering of intrigue that Samsung, Lenovo and HTC have taken over the past 27 months. Also note the rise of OPPO and, more prominently, Huawei.

Not in chart form are US numbers for planned smartphone purchases: 47 percent of buyers plan on getting an iPhone, up from 38 percent from last check.

Our last chart for the day shows changes in market share for the iPhone in terms of both purchase intention and current ownership. 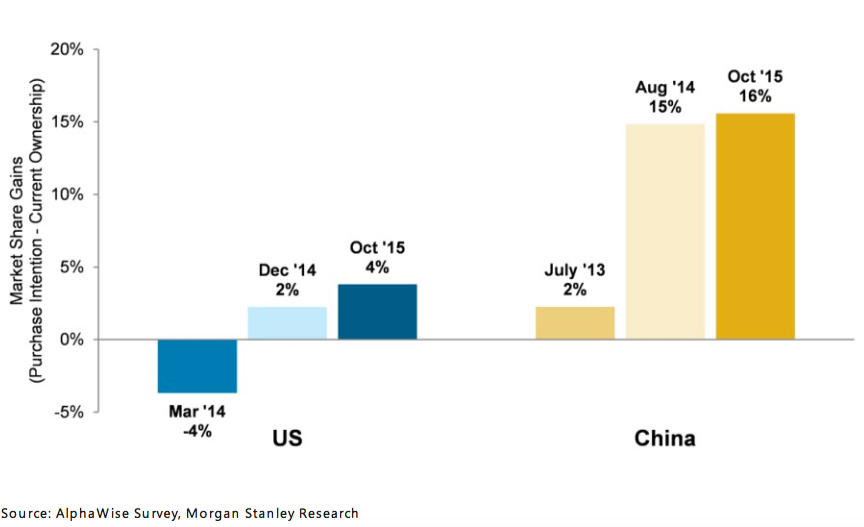 Apparently, Apple grew like a weed in China the past couple of years while also righting ship in the US.

One of the pains of retreiving your numbers from secondary sources is coming across vague differences between statistics. In the case of numbers concerning those who plan on upgrading their iPhones in a certain timeframe:

While we can’t be certain, the venn diagram on these data sets may have a large union: the term “in FY16 in the next 12 months” seems to refer to the 12 months from any point within FY16. If true, that means with that dataset, we’re looking at upgrades through roughly October 2017. The second dataset may refer to upgrades through either the end of FY2016 or calendar 2016.

Joy to the world, there are numbers more.

So, while the iPhone has long been internalized in the US, Apple has been able to take advantage of an upmarket that was in need of a big break-out. The numbers reflect this in China and elsewhere. These numbers are great for what they are to Apple as the company can take advantage of both volume and product margin to reap profit from international markets even while the US dollar is strong.

There’s a strong sense of security when investors throw around AAPL in conversation. Though we’d rather not imagine it, we can’t help but wonder if there’s a bubble in Cupertino that’s waiting to pop.

The ASUS_I005DB ROG Phone 5 has some design changes. It does not seem to feature the RGB-lit LED ROG logo and Tencent Games logo