Did Foxconn insiders with “information on Apple’s next 12 months of hardware updates” truly reveal everything we need to know about the game-changing iPhone 8, throwing a monkey wrench into a previously confusing rumor mill churning at full speed?

Not so fast, as their credibility was probably impossible to verify, despite the best efforts of Reddit’s moderators, and they already got the “modified A9 chip” powering that “Siri home speaker”, aka HomePod, wrong.

It’s an A8, apparently, which opens many other claims back to discussion. Anything’s still possible, and the latest “confident” report on a number of key “iPhone X” features could well be partly or entirely legit, as well as partly or entirely phony.

iDrop News can’t say for sure if Apple will go with the iPhone 8, X or Edition name in the fall, and its high-res renders, while allegedly realistic, merely imagine how the device might look running iOS 11, based on existing intel and confirmation by “inside sources on Twitter.” 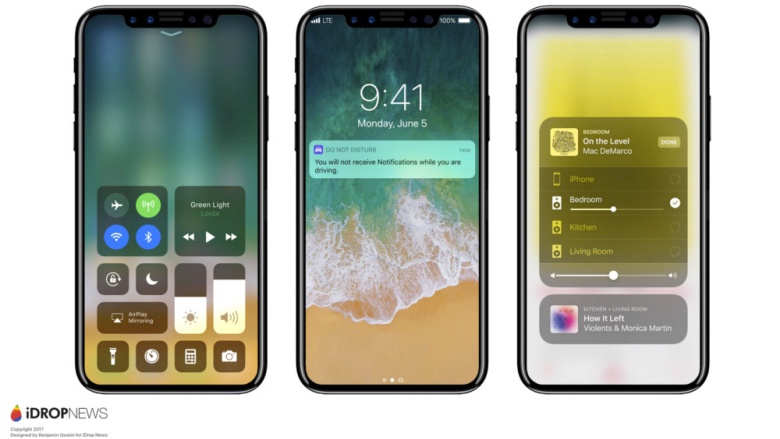 We have to admit, this is a crazy attractive prospective design, no side or bottom screen bezels, with a small centered “sensor bar” at the top apparently incorporating “dual” front-facing cameras, a proximity sensor, ambient light sensor and earpiece. Kind of like the Essential Phone’s single selfie cam cutout, only understandably larger.

Now, we’re not shown the handheld’s back, but the “belief” is Touch ID technology will ultimately be baked into the “front-facing glass” following tests of “multiple devices.” Translation: no ugly rear-mounted fingerprint sensor, and another chance for Apple to steal Samsung’s thunder. Other increasingly plausible iPhone 8/X features include glass back panel-facilitated wireless charging, a vertical dual-lens camera setup, facial and iris recognition, as well as some mystery AR functionality. Who’s excited?