iPhone 8 schematics leaked out of Foxconn, wiped from Weibo

Social media tech publication KK Sneak Leaks has published what were supposedly some schematics of the upcoming iPhone 8 sourced from Foxconn facilities. The pictures and associated post were removed from any social media they were on, including Facebook, Twitter and Weibo.

The literally sketchy hand-drawings, as obtained through BGR, point out some room on front side of the phone for multiple sensors that could include dual selfie cameras as well as iris and facial scanners. The main takeaway out of those dots is that Apple has four ports to fill. The big show at back is the half-hearted attempt at an Apple logo. Above that and to the left is a vertically-oriented module with two cameras and some port action. We suspect that LEDs and a laser emitter will come into play here.

Keep in mind that rumors are pinning Apple to mimic the Galaxy S8 in design with a thin metal band straddling two curved caps of glass, so interacting with the four input switches on the sides — including what looks to be a capacitive pad for the volume rockers — as well as the SIM tray may be something a bit much to ask for. And yes, there seems to be at least eight instances of banding to optimize signal reception.

We are told that the Lightning port is in, the 3.5mm headphone jack is still out and the physical home button is shunned. We’ll have to see if the on-screen fingerprint reader will finally make it on the iPhone 8 as if the rest of this design will.

[alert variation=”alert-warning”]Update: Here’s the link to another Weibo post that is relaying an electronically-drawn blueprint of the iPhone 8. KK Sneak Leaks is tagged in it as well. 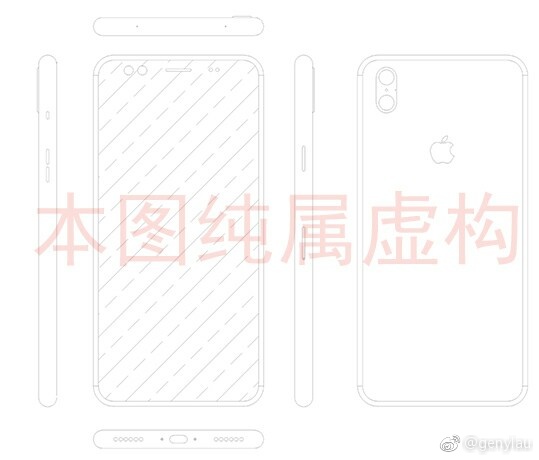 This iPhone 13 prototype is reportedly among many other models that are currently being tested, so the final design might vary in the end.